DIANE PHILLIPS – Brent Stubbs: To the quiet goes the glory, even if it takes a little longer

WE are so busy looking for the greatest of all time, we even created an acronym for it. GOAT gave us an excuse to focus on the best of the best - the Simone Biles, Serena Williams, Tom Bradys, LeBron James and Michael Jordans of the world.

We became preoccupied, almost obsessed, with the simple solution of whose life to celebrate when we needed a little relief during a pandemic followed by a war.

But being razor-focused on the best of the best had a downside. It made it too easy to overlook the contribution of others.

In sports writing, there will only ever be one GOAT, the swash-buckling, fast-typing, storyteller Ernest Hemingway who could chug a rum and tell a tale like no one before or after even if the sport of bull-fighting turned your stomach and you wished the big fish he was fighting would get away. 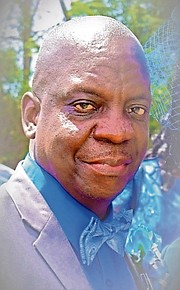 BRENT STUBBS, who has been reporting on sports for The Tribune for 40 years.

Hemingway may have been a guest in this country for a short while. He may have left a mark, but so has another Bahamian, a quiet man who deserves a different kind of respect and thanks.

His name is Brent Stubbs. For the last 40 years, he has brought us a front row seat through the written word to the glory of victory and the agony of defeat of every major sporting event and every player in The Bahamas. There is not an athlete he does not know, a sport he does not understand, a trip he was not willing to take to cover an event that sports fans in The Bahamas wanted firsthand knowledge of.

Stubbs does not play favourites. Whether he is covering a Saturday swim meet or a bitter dispute among associations and federations, he tells it as he sees it through the eyes of someone who has seen about everything there is to see in the world of sports in The Bahamas and wherever Bahamian athletes travel. Humility has kept him honest. No meet, game, regatta or play-off is too minor for his attention. He covers everything from equestrian events to track and field, from sailing to baseball, from the athletes who show promise to the Bahamians who deliver that promise on the world stage.

“Brent Stubbs is a quiet, hardworking gentleman who has spent his life with The Tribune and in doing so has seen almost the whole world through the lens of his international sports reporting,” says Eileen Carron, the paper’s longest serving publisher, a keen observer and a world-class writer herself. “He deserves our praise. After four decades, he works as hard on a story now as he did as a junior reporter. Every event is new. He covers it with respect and writes with history that no one can match.”

Stubbs is so much a part of the sports reporting world that the Bahamas’ most decorated athlete Pauline Davis singled him out during the recent signing ceremony for her new book, Running Sideways. When a speaker at the packed event in Goodman’s Bay intended to make reference to Brent’s contribution and accidentally called him Brent Symonette, the voices of more than 150 dignitaries, friends, family and admirers rose in thunderous protest to correct him in no uncertain terms, shouting instantly Brent Stubbs. An embarrassed speaker soon recovered but the crowd had set him straight. This was Pauline’s night and the only Brent that mattered to her had nothing to do with politics and everything to do with good sports coverage. It might have been the loudest chorus of his name this quiet writer has ever heard.

“He knew me better than anyone except my coaches and family,” explains five-time Olympian and two-time gold medalist Pauline Davis. “We go way back to when we were kids. We trained together in the Bain Town Flyers and we were both coached by Neville Wisdom. Later, when Brent was a writer, if he was at a meet, I felt better. I just felt somehow even though he was reporting on everything, like he had my back.”

Ironically, Stubbs did not start out to be a journalist of any kind. He was a track and field star at St Augustine’s College when in his senior year, he suffered shin splits. The injury was so severe that despite rehab, he could not return to track. No longer able to run, he started writing about sports for the school paper. After graduation, he was working for Mr Photo when a former teacher walked in, told him there was a job opening at The Tribune and urged him to apply.

Brent got the job and has spent 40 of his 56 years at this paper’s sports desk.

Stubbs has been honoured by the SAC with the Alumni Achievement Award in Sports Journalism. In May, he will be named a reverend in his church, Macedonia Baptist on Bernard Road in Fox Hill. The church, just like Brent, is not pretentious. It just goes about its duties helping the community thanks to members like the sportswriter who has donated hundreds of hours of volunteer work to it.

A husband, father of four, pioneer and soon to be a reverend who is so humble that he promised even after nearly half a century of performance, he would not allow his new responsibility with the church to interfere with his duties as a writer. “I appreciate all you and this company do for me,” he said in an e-mail to someone from The Tribune he invited to the ceremony.

Brent, you almost had it right. The wording should go like this: Brent, we in The Bahamas appreciate all you do for us, for the world of sports and for those who make winning their dream.

The Royal Regatta – are you convinced now sailing should be the national sport?

ROYALS William and Kate, the Duke and Duchess of Cambridge, are on the island of New Providence today, March 25. That’s hardly news. You knew something was happening when they closed the government’s tar plant to the public for two weeks to ensure there would be enough tar to pave all the roads the royal convoy would travel during their one-day visit to the capital before going to Abaco and Grand Bahama.

What’s especially noteworthy is what they chose to do in the nation’s capital. They chose to sail, to participate in a regatta on Montagu Bay to be exact. Weather permitting, they will face off against each other, Kate on one native sloop, William, a likely future king, on another. They did not choose the official national sport, cricket. They chose sailing.

How much more will it take to convince the powers that be that sailing should be the national sport?

From the pre-history of The Bahamas to this very day, sailing has been part of what and who we are. The water is our highway and our way of life. It is our breathing space and our sports arena. It gives us life and feeds our soul and when the majestic native sloops with ivory canvas-like sails being hoisted on masts twice the height of their hulls defy the odds and the voices on the boats shout starboard for their rights even if they are on port, every element of Bahamian culture explodes with excitement.

The human strength to pull anchor and cross the start line cleanly without fouling or going too early, the strength and teamwork to hoist the oversized sail, the quickness to tack and scramble out on the pry board with competition beating down on you and the next mark within sight in a race being fought with more grit and determination than mechanical advantage, what more could you ask in a sport born of the sea and of the man - and womanpower to take part in it?

From dozens of inner-city children who participate in the Opti class to world-class sailors like Gavin McKinney, Craig Symonette and Mark Holowesko who do The Bahamas proud in a one-design class, to young Olympian sailors like Paul de Souza to the hundreds who participate in native sloop regattas, sailing is a sport for everyman and everywoman. It does not discriminate based on age, colour, education or political affiliation. It just is.

It is time to get real. The ship of cricket as the official national sport of The Bahamas has sailed.

At the risk of repeating myself, how much more will it take to convince the powers that be that sailing should be the national sport?