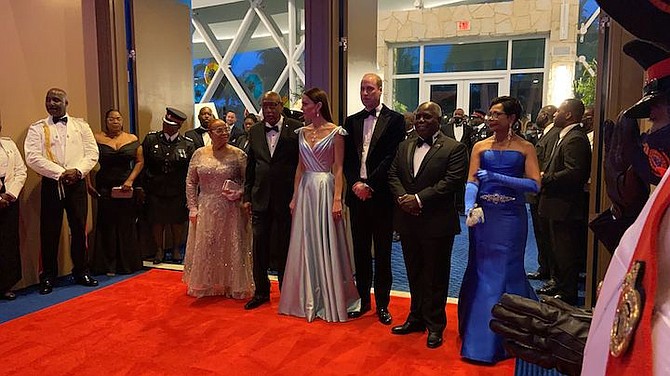 The scene at the Governor General's Reception.

PRINCE William said the monarchy would support decisions The Bahamas makes about its future, with 50 years of independence next year and amid reignited public discussion about the country possibly shedding ties to Queen Elizabeth II.

"This is not my first time in The Bahamas," he said at Baha Mar on Friday night. "I came here with my mother as a child, snorkelling around the James Bond wrecks of Nassau left me with the most vivid memory of your vivid blue waters.

This was welcomed by applause from those gathered as he also conveyed well wishes from his grandmother, Queen Elizabeth.

The Duke made the remarks during a special reception hosted by Governor General Sir Cornelius A Smith held in his and the Duchess of Cambridge's honour ahead of their stops in Abaco and Grand Bahama on Saturday.

Their visit to The Bahamas closes out a week-long tour including Belize and Jamaica marking Queen Elizabeth's 70th anniversary on the throne.

The Duke, however, made no comment about reparations for slavery.

On Thursday, Rastafarian Priest Rithmond McKinney rejected the Duke and Duchess of Cambridge’s visit to The Bahamas, saying their presence in the country flaunted Britain’s centuries-old oppressions and injustices on our ancestors.

While in Jamaica, Prince William and Kate were met with demands that the Crown pay reparations for Britain’s role in the slave trade.

According to USA Today, Prince William expressed “profound sorrow” for slavery during the visit, although he stopped short of offering the apology demanded by protesters who are also seeking reparations.

Prince William made the comments during a dinner in Kingston.

While there, he echoed the words of his father, the Prince of Wales, who described the slave trade as an “appalling atrocity” during a visit to Barbados last year, when that Caribbean nation severed its ties to the British Crown and became a republic.

There has not been a strong push here for The Bahamas to become a republic, however some prominent figures support such a move.

Recently, former Director of Culture Dr Nicolette Bethel told the Nassau Guardian she believes the royal visit may contribute to the push to remove Queen Elizabeth as this country's head of state.

She told the newspaper she also believes The Bahamas should become a republic.

Nearly every country which has abolished our Monarchy has joined the ranks of a failed third world republic. Why would we want to change our democratic foundation of a free parliament, our own Governor-General and impartial courts? . This stability has brought us the investment we really need to progress. What advantage to us is a change to a republic? None that I can see.

Emancipate yourself from mental slavery!

It would be a huge mistake to lose our present standing and take on being a republic. As much as I respect some of those who would like to see that happen, it is not a realistic or wise choice to take that road. Once our current best position is lost it will not be able to return. Regrets and hindsight would abound. Then it is too late and tears of loss due to such bad decisions will not be of any substance.

Davis's wife is obviously unaware that elbow length opera gloves have been out of style for quite some time now, even for most brides. And they definitely should not be worn by a woman who has 'thicker' arms. LOL

Why do we want to say we independent but yet still hold onto the vestiges of colonialism? Wh do we still enslave ourselves? Sad we are still walking with the shackles of the past.

You can distance yourself from the past as much as you want, still won't change what happened.

So you prefer to stay in slavery rather than stand up and chart a new course? I am not saying you can change what happened. I am saying it is time to make a different future and stop living for and shackled by the past.

It won't change it, but celebrating something that demeaned and oppressed ones race demonstrates approval and agreement. At the very least Bahamians should stop celebrating these people and their legacy.

Great Britain isn't the global empire it once was before world war 1 and 2. The West are still benefiting from slavery to this day we owe it to our forefathers to remove these chains. Most countries that turn republic's fail from within thru civil wars, bad economic management, corruption and the personal mindset of its people. Whether the Bahamas decides to be a republic or not this country will fall not because of political instability but because of poor economic management of our economy by numerous governemnts and corruption. The first steps to becoming a Banana Republic is a debt crisis or war.

I, for one, see no benefit to attaining the status of a Republic. I am quite content to remain a member of the Commonwealth!

Unfortunate that the persons who hog up the limelight in this country are mentally incapable of moving us forward.. They just have a good hairdresser and can brag about who designed their outfit. Im not including the Davis' in the bunch... I like the signals he's sending but they need to translate to some concrete and strategic action within the next 6 months

All of the former colonies can scream "republic" as much as they want to be "Woke", "Trendy" and distance from the past but they still will ultimately be "local government" and vassals of the United States or whatever is the large regional power. The US and International Banks, that all the former colonies borrow from, will ultimately dictate policies to these nations.

Instead of worrying about meaningless gestures such as becoming a "republic", these former colonies should be trying to feed themselves instead of relying on imports, back their own currencies with something like gold or silver instead of US dollars, own their own debt instead of being owned by international banks and secure their borders, that's what real countries do.

Even more than slightly dishonest and insincere and unchristian like dress sisters in glittering 8 foots long tail evening gowns to walk the red carpet to curtsy before the Royal Couple whilst husbands rubbing in how we colony goin' soon move to status of a Republic. “Long live the future king. May his reign last forever. May his strength...Fail him never...” and special mention goes to inherited the Dukedom,* Prince George of Cambridge, ― Yes?

What I see is a PM happy to be rubbing shoulders with Royalty (and he is not the only one). This tells me that the Crown will be part of this country for many more years...

The Royal Visit was a smashing success. The dynamic young couple are learning more about the Commonwealth countries and are so willing to help us which is good news. Let us be proud of our history and heritage.