Crowds turn out for Royal couple in Grand Bahama 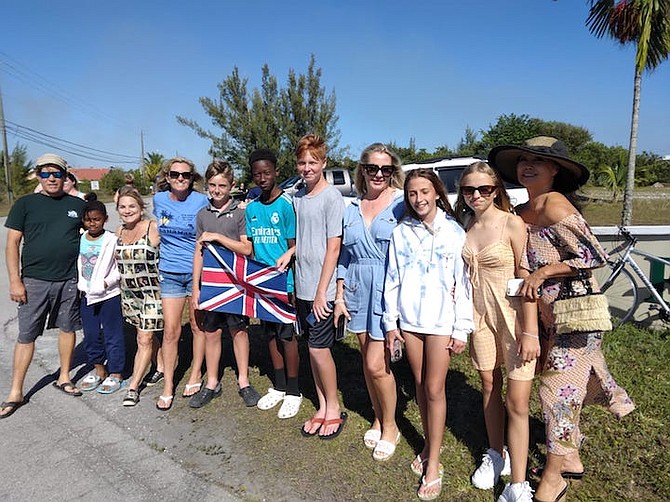 Mary Silvera and a group of family and friends gather on Midshipman Road, the route taken by Prince William and Kate to Coral Vita on Saturday.

Prince William and Kate, the Duke and Duchess of Cambridge, arrived in Grand Bahama on Saturday afternoon to a warm welcome from residents of Grand Bahama who lined the roadsides to get a glimpse of the young Royal couple.

They first visited the Grand Bahama Children’s Home, where they met with the children, and unveiled a plaque commemorating their visit to the home before heading to Coral Vita, which was awarded the new global Earthshot Prize by Prince William.

People lined the route leading to the entrance of the Children’s Home, waving Bahamian and British flags to greet Prince William and Kate as they arrived around 3pm.

The children at the home presented the Royal couple with a special art piece of a flower with 70 little fingerprints for the Queen’s 70th anniversary – in the design of her favourite flower. Prince William and Kate also received a painting created by the children and joined them in creating a mosaic art piece.

After unveiling a plaque of their visit to the Home, they were off to Coral Vita.

Laura St George said the visit by the Royals is incredibly significant to Grand Bahama.

“I know it has been such a hard couple of years because of the hurricanes, and the island is now recovering and rebuilding. I feel so grateful that the Royal Family has chosen GB to visit during their busy tour,” she said.

“For me it signifies that the attention of the world is now back on The Bahamas because the last time that the world looked in this direction was during the hurricane (Dorian). And so, now we can show the world we are ready for international visitors, for business to return, and welcome new people,” Ms St George said.

“I am so glad the people came out, she said. We came out from 12-noon, and we were singing, brought drinks, and sausages, and it was just fun for us,” she said. We had the best time.

“Some of us have been here 50 years, but we are still very into the Royals. We still have Hello magazine which is all about Royals, and we follow their fashion and whatever they are doing. We love Diana, Harry and William and now we love Kate,” she said.

Nivea Davis, and her children Mateyo and Mila, standing along Young Husband Avenue, with a Bahamian flag to greet the Royal couple on their visit to Grand Bahama Children's Home on Saturday.

People also gathered at Midshipman Road along the route that the Duke and Duchess took on their way to Coral Vita, the first commercial land base coral farm.

Mary Silvera was among a group of people standing in the area around 4pm with flags to greet them.

“They are here supporting our island and Coral Vita, which is important, and I think that is great they are coming here and doing that,” she said.

Another spectator said: “We are excited about this it will be my first time seeing a Royal.”

At Coral Vita, the Duke and Duchess were shown the outdoor tanks where resilient coral are being grown for replanting in the ocean to restore dying reefs.

The couple also spoke with students and representatives of Waterkeepers Bahamas about their mangrove planting initiative in Grand Bahama. They were then taken onboard a catamaran vessel out at sea to plant the coral in the ocean.

Sarah St George, chairperson of Grand Bahama Port Authority, said the Royal’s trip to Grand Bahama is one of excitement and inspiration.

“It is an inspiration for us to have the young Royal couple come to Grand Bahama, which has been through so much,” she said. “Their visit signifies the level of faith, the spirit of resilience of the people and the island. It lifts the spirt to have a day like today.” 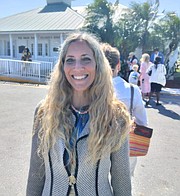 Laura St George was among those at the Grand Bahama Children’s Home who witnessed the unveiling of the plaque by Prince William and Kate.

Ms St George believes their visit will boost to tourism on Grand Bahama.

“The picture the world saw of GB was after the tragedy of Hurricane Dorian and this sends a different message of a resilient spirit, hope, and faith,” she said. “We want people to see this all over the world so they will want to come here.”

Minister of Tourism Chester Cooper, in Grand Bahama with his wife, Cecile, said: “I was happy today to come to Coral Vita - it is something special. I am coming back, and we are bringing our children because it is exceptional what they are doing, and it really speaks to many of the things that our Prime Minister talked about concerning the preservation of the environment and climate change.”

“It is a great tourism spot, and I think we can craft it into a tour, and hopefully get more cruise passengers off the ships here to Coral Vita and stopping at Port Lucaya Marketplace, and we are going to be working on that. I think this a great draw,” he said.

Minister Cooper stopped and met with onlookers gathered near Coral Vita. He said it is good that there is a level of excitement in the air on Grand Bahama.

“After the devastating times of Dorian and COVID, it is good to see people out again, and to see people excited again. There is an excitement and buzz I feel in the air today,” he said.

Minister of Environment Vaughn Miller said what is being done at Coral Vita can also go to other islands of the Bahamas.

“What I would like to see… is Bahamians becoming much more involved in it and the training Bahamians,” he said. “We can go to other islands and take this back because the stony coral disease is spreading and is a real issue and challenge.

“Thank God there is now a solution for it that we can do the restoration work. But hats off to what they are doing here. And not just with the coral, but also the mangroves because of Dorian, GB lost over 70 percent of the mangroves, and Abaco lost over 40 percent,” he said.

Mr Miller encouraged Bahamians to have an appreciation for coral reefs and mangroves. “I encourage Bahamians throughout our archipelago to become involved, and participate in the process of planting mangroves,” he said.

Tourism Minister Cooper said the Duke and Duchess ended their Caribbean tour on high in the Bahamas.

“We were able to showcase our art our culture, the warmth and resilience of our people, and that is the message from the last few days of the Duke and Duchess’ visit here,” he said. “And we wanted to demonstrate the quality and the pride of the Bahamian people, and I believe we have done that. We are a tourism destination and we wanted to show what a Bahamian welcome is all about, and I think we did just that.

“They saved the best for last,” Mr Cooper added. “I think they will go home on a high. We showed them true Bahamian hospitality. We understand the entire trip has not been smooth for them, but they are going to go home raving about the Bahamas, and they will say it is truly ‘Better in the Bahamas.’”

I thought Fweddy Boy Mitchell had persuaded Davis to issue a proclamation that only the Bahamian flag (and not the UK flag) be publicly displayed during the Royal visit. I guess residents of Grand Bahama decided not to give that proclamation the time of day. LOL

It was a wonderful visit to The Bahamas. We are proud to be in the Commonwealth and thankful to The Queen for over 70 years of service building up our multi-racial Commonwealth.