FACE TO FACE: Overcoming every obstacle

WHEN Aneesah Abdullah was a teenager, she aspired to work at the United Nations (UN) one day. She was an avid reader of the Los Angeles Times, Newsweek, and Reader’s Digest. She soaked up news on world affairs and with it, she found inspiration to make a difference in the world. From the Rwandan Genocides to Yitzhak Rabin and the Peace Accords, she read of world events and felt compelled to do her part to make a better world. Today, she is living out that dream. She is the United Nations Country Coordination Officer for The Bahamas. In her role, she supports the strategic planning, coordination, monitoring and reporting of UN country level programming and partnership to advance on Agenda 2030 and the Sustainable Development Goals (SDGs), in line with the national priorities of The Bahamas. This is the first time that The Bahamas has UN representation on such a level and as a Bahamian, she proudly takes on the challenge.

“This job allows me to support the renewed, formal, and unprecedented collective engagement of the UN Development System in The Bahamas,” she told me.

“Personally, it’s an opportunity for growth and development. As the first in the post, I have quite a bit of latitude in shaping the foundation for the work of the Office. This means creating (hopefully) impactful mechanisms which bring the comparative advantages of the UN system to bear on relevant national priorities.” 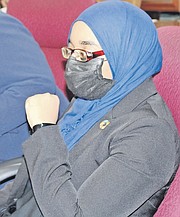 In meeting Aneesah, you will find a woman as down-to-earth as she is focused and determined. She is highly educated and has put her knowledge to work in practical ways, bent on ensuring that any project she engages in is not just rhetoric, but brings tangible results. In this way, she can bring about real changes that impact people’s lives for the better. That’s exactly what she intends to do as UN Country Coordinator.

As a young girl in a Muslim family, there was no television in Aneesah’s home. So, her thirst for reading gave her a vehicle to be transported all over the globe. Her father’s spiritual pilgrimage in the Muslim faith also provided opportunities for the family to experience life beyond the borders of New Providence, where the homestead is. His quest for higher spiritual knowledge took the family to Saudi Arabia. There, Aneesah was born. Her two elder siblings were born in The Bahamas.

Her father’s journey to becoming an Imam led him to Guyana, where he met his wife and Aneesah’s mother, and it also took him to India. The family returned to the Bahamas for a time before they journeyed to Saudi Arabia. Once his tutelage in Islamic law was complete, he took his family to Los Angeles, where he served the Muslim community there. The family grew to include four boys and two girls and together, the children attended a private Muslim school. Aneesah recalls that in addition to standard secular subjects, she learned about cultural history, including African American and Native American history, being inspired by the stories of great leaders like Harriett Tubman and powerful native tribes like the Sioux. She was also taught Islamic studies and Arabic; and in this way, she developed a well-rounded education even beyond the scope of secular schooling.

Aneesah’s love of reading was fuelled by her parents. Her mother gave her children the classics to read and expand their mindsets, while their father held education as a priority, wanting the best for them. Her thirst for knowledge was encouraged by one of her teachers, Sister Shaheedah, who inspired her students to pursue their dreams. One day while at school, Sister Shaheedah shared with the class, her own definition for determination.

“She said that determination meant doing what you want and no one can stop you except for Allah… there’s no insurmountable obstacle,” Aneesah said.

As simple as it sounds, such a word can define and shape a lifetime of possibilities, as it did for Aneesah. Today, she holds a Master of Arts in Human Rights from the University of London as well as a Masters in Public Administration from the University of Southern California. She holds a Bachelor of Arts in Public Administration with Distinction from the College of The Bahamas, an Associate of Science in Early Childhood Education from Ashworth College. Along with these degrees, she has earned a number of professional certificates covering disciplines, including project management, human rights, gender training, and training on the UN Convention on the Elimination of All forms of Discrimination Against Women (CEDAW). 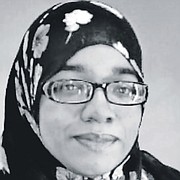 Aneesah may have never arrived at such accomplishments had she been bound to others opinions of herself as a Muslim woman, or a woman in general. When we see the Muslim woman in her hijab and abaya (garments and head covering), we may think that her life is one filled with restriction – one where the fulfillment of one’s dreams and aspirations stand to remain an illusion. But Aneesah has proven that this is not so. She managed to come this far without ever compromising her faith.

Growing up in Los Angeles, Aneesah occasionally was exposed to the stares, the points and the giggles. It did not move her… possibly because she had the love and protection of her family, positive role models who were incredibly proud of their Islamic identity, and the comfort of a circle of schoolmates all facing the same thing. Learning early to disregard others’ opinions of her allowed her to steer her course steadfastly.

It was around the age of 15 when Aneesah began to question why she was worshipping the way she was. It is the juncture many a teenager will have to face as they learn to look at the world through their own spectacles and not that of their parents.

She read the Quran cover to cover, along with a trusty Arabic dictionary.

By doing this she made her own discovery: “I developed a one-on-one relationship with the Creator. I discovered that I am solely responsible for my actions and only to the Creator am I answerable. It’s made it quite easy to not entertain or succumb to what people think about how or what I should be. . Ultimately, if you are following a certain set of principles generally applicable to humanity, and you aren’t harming society, then you should pursue your path. So, I don’t view it (Muslim life) as contradictory to any path I had chosen.”

These wise words should guide many a family who face the issues that arise when a child seeks their own path. Aneesah’s grandmother knows it all too well. The child she gave birth to as Frederick Sturrup changed his name to Fareed Abdullah and took on a religion which she did not understand. Imam Fareed would have to face the same parental feelings when Aneesah left the family nest in Los Angeles to chart her own path. She returned to the Bahamas and lived with her grandmother, Virginia Dames Sturrup of Rolletown, Exuma. Shocking as it may have been for him and her mother Zorina, it seems apparent that she inherited some of her father’s adventurous spirit and thirst for knowledge.

She was a teacher in Los Angeles and when she came home, she continued to serve as a private tutor for children, some of whom are college graduates today. But she also became a civil serv-ant. She had an opportunity to work at the Bureau of Women’s Affairs, Ministry of Social Services and Community Development, where she co-drafted the Bahamas’ 6th Periodic CEDAW Report. She was there as the Bureau transitioned to the Department of Gender and Family Affairs, where she had, among other things, oversight on key gender-based violence projects. By June of 2018, Aneesah became a project officer for the Sustainable Development Goals Unit (formerly the Economic Development and Planning Unit) in the Office of the Prime Minister – during which time she was seconded to the National Emergency Management Agency and served as partner coordinator during the post-Hurricane Dorian response.

In April of 2021, Aneesah made history when she was appointed as the first United Nations Country Coordinator for The Bahamas. Since then, the Bahamas has signed on to the Multi-country Sustainable Development Cooperation Framework (MSDCF) which will lay the frame-work for the UN and The Bahamas to work together to achieve the SDGs. Garry Conile, Resident Coordinator for the UN’s Multi-country Office in the Caribbean, travelled to Nassau to make the announcement and meet with Government officials.

“I applied for the job because it seemed like a natural next step following my role in the Sustainable Development Goals Unit, and the requirements for the post aligned closely with my work experience,” Aneesah told me.

“I knew that I was qualified, but so are others in The Bahamas. Fortunately, though, I was offered the post. One of the key reasons for applying was to continue the work I had resumed with the SDG Unit to facilitate the Bahamian government to be a part of the MSDCF – a process that began in 2017.”

After the signing, the press conversed with Prime Minister Davis. When the issue of gender equality was raised, Mr Davis pointed out that Bahamians resoundingly rejected a referendum designed to allow married Bahamian women to automatically pass on their citizenship to their children. To date, this law remains a thorn in the side of many Bahamians. Aneesah is fortunate that her father is Bahamian and could pass on his citizenship to her; otherwise, she would have been coming home to the Bahamas in an attempt to conquer the tedious process of applying for citizenship.

With these and other issues, including violence, still to be addressed, Aneesah hopes to make a difference in her position. Today, she will be taking part in working meetings between the United Nations and the National Reporting Cooperation Mechanism (Chaired by the Office of The Attorney-General and Ministry of Legal Affairs), in cooperation with the Office of the High Commissioner for Human Rights (OHCHR). The focus will be to provide training on the Convention on the Rights of the Child (CRC) and the Convention on the Rights of Persons with Disabilities (CRPD), as well as treaty body reporting guidelines.

Aneesa’s contributions to her country includes “supporting the bridging of gaps in the laws, policies, and programmes (particularly in cases where they may be discriminatory),” and ultimately working, in her professional and personal capacities, to support the creation of a more inclusive, productive and peaceful society.

While schooling at the College of The Bahamas (now University of The Bahamas), yet another teacher inspired her: “Yvette Pintard-Newry, a lead professor, reminded me of the best in people. She is a woman who values diversity and encouraged critical thinking. I became an adjunct professor at UB after she encouraged me to apply.”

While working in the public service, she met other powerful women, including Nicola Virgil-Rolle, whom she considered a “phenomenal” director, and Permanent Secretary Phedra Rahming, who created a just environment for employees in the Ministry.

With great examples of women leaders in her family, her faith and in the professional space to admire, Aneesah has become a successful woman in her own right.

I asked her what it meant to her, being a Muslim woman: “It’s quite personal (despite my outward dress) and it means striving to adhere to a set of key principles and guidelines set out in the Qur’aan (Islam’s holy book) and the Sunnah (traditions and sayings of the Prophet Muhammad peace be upon him) which ultimately lead to the betterment of myself and any society in which I may happen to live. It embodies a private contract of sorts between myself and my Creator - without the influence or interference of anyone else.”