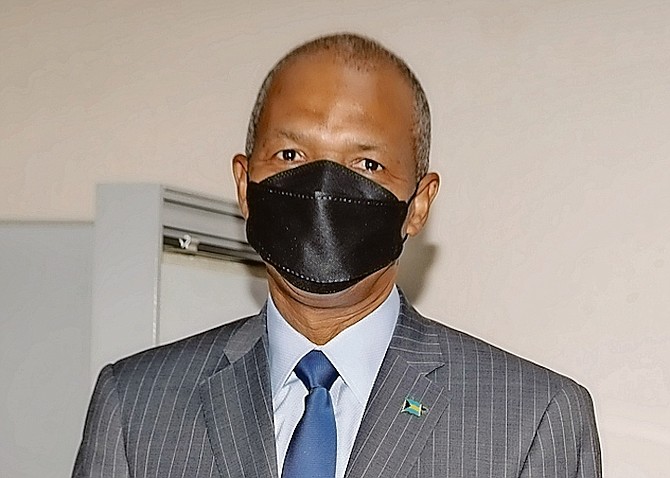 WEATHER experts are predicting an active and “above average” Atlantic hurricane season, with four major hurricanes expected this year.

The season, which starts officially on June 1, is also forecast to have 19 named storms, with as many as nine hurricanes.

Yesterday, Myles Laroda, the state minister with responsibility for disaster preparedness, urged Bahamians to start preparing now ahead of the upcoming season, underscoring the impacts of climate change on vulnerable countries like The Bahamas.

He also said the government is developing a comprehensive strategy on disaster preparedness and management, with special focus on prevention, mitigation, response and recovery.

“Our nation is also in the precarious position of having to change the way we perceive disaster risks within a changing climate,” Mr Laroda said during a press conference at the National Emergency Management Agency yesterday. “The influence of climate change has already begun to change our way of life by fuelling the development of super storms that strengthen quicker and keep their intensity longer.

“Whereas category 5 storms, as seen with the impact of the September 2019 Hurricane Dorian, were once rare, they now occur with disturbing frequency. It is critical that each Bahamian and resident take the necessary precautions now in the event that a storm hits during the hurricane season. Precautionary measures taken now could save life and property in the future.”

Acting Director of the Department of Meteorology, Jeffrey Simmons said that although The Bahamas was not affected by any storms last year, it is possible the situation could be different this year.

Mr Simmons said: “Even though last season was active, 21 named storms, we were not impacted but that is not a license for us to relax. We should be prepared. That gave us time to regroup, especially since Dorian and Joaquin and Matthew, etc, have plagued us for several consecutive years, so we’re asking everyone to be prepared.

“The Department of Meteorology, we are ready, and we have been doing our Family Islands inspection that is going around the islands inspecting our equipment since January.”

He also spoke about the agency’s efforts in engaging cutting-edge technology aimed at providing better and more accurate forecasts.

“Going into this hurricane season, we have three doppler radars that are now live in New Providence, Marsh Harbour (Abaco) and Long Island. The fourth one will come on stream (at) the end of this month in Ragged Island and we are aggressively working toward having our fifth radar in Mayaguana, which is already installed but we just need to get it online now and we’re working aggressively to have that done by the peak of the season.”

Mr Simmons continued: “Our radars assist us a lot with our forecasts and tracking of hurricanes and all that but we have a lot of convective activities going on, shower activities forming and some of these can be really severe at times and we can have some moderate tornadic activities in them. The radars really assist us in pinpointing where they are and how they are moving, etc.”

For his part, Director of NEMA Captain Stephen Russell, said officials will be promoting informative messages on hurricane readiness the entire month, which is “National Disaster Preparedness month.”

This year’s theme is “Strengthening Community Readiness for a Better Tomorrow.”

Last year, former Coroner Jeannine Weech-Gomez recommended the need for a mass fatality plan and the mobilisation of a missing persons call centre to help strengthen the country’s response to natural crises after Hurricane Dorian in 2019.

Coroner Weech-Gomez made the recommendations during the inquest into the presumed deaths of some 34 people reported missing after Hurricane Dorian in 2019.

In response to those recommendations yesterday, Captain Russell said: “NEMA and our partners, we have viewed a recent coroner’s report following investigations on Hurricane Dorian and plans are being finalised to more efficiently and effectively care for the deceased, God forbid in the aftermath of disaster.”

Hurricane season is June 1 through November 30.

A list of shelters will be made public in the next two weeks, according to officials.