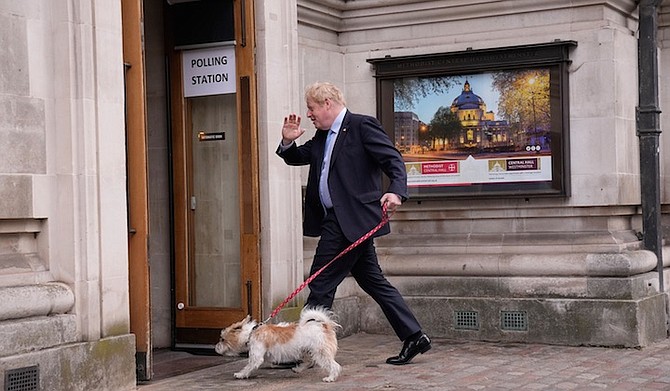 BRITISH Prime Minister Boris Johnson waves at the media as he arrives with his dog Dilyn to vote at a polling station in London, for local council elections on Thursday. Photo: Matt Dunham/AP

HAVING read an interesting letter recently in The Tribune by Maurice Tynes entitled “Modernising our nation” in which he advocated introduction of community or local government in New Providence, I thought it might be interesting in today’s column to write about last week’s regional and local government elections in Britain and the effect on the wider political situation in the country.

These elections are held at varying times. They should be about issues like planning and the environment, municipal taxes, road maintenance, keeping the streets clean and garbage collection, with voters deciding which of the representatives of the main political parties are most likely to deal effectively with such issues at the local level. But they also present an opportunity for voters to express their feelings indirectly about the performance of the national government.

Thus, despite the traditional low turn-out of around 35 percent compared to a much higher level at general elections, many people in the UK view them as a key test for Prime Minister Boris Johnson’s Conservative Party and his own leadership. This is amid months of allegations about lockdown-breaking parties as well as the mounting cost-of-living crisis that is causing so much concern.

As such, the choices of voters at regional and local elections are said to be an indicator of what might happen in a general election. However, even if people sometimes register so-called protest votes to signal dissent to the Prime Minister and his colleagues about their policies and conduct, they do so in the safe knowledge their votes locally will not change the reality of power at the national level. So, while it is often the case of warning national political leaders of the need to improve or change tack on a range of issues, voters will not necessarily wish to punish them at a separate general election by supporting the opposition and precipitating a change of government.

Local councilors standing for re-election – in particular Conservatives who, according to the polls, were in for a drubbing by dissatisfied voters – pleaded to be judged on their own performance working with local authorities and not be held accountable for the mistakes and transgressions of national politicians at Westminster; and it seems that before the elections more and more candidates were distancing themselves from the party leadership.

But, despite all this, with more than 4,000 council seats up for grabs and the polls indicating the Tories might lose as many as 800, in the event the figure was substantially less at around 500 seats. The Tories came third in Scotland behind Labour and the Scottish National Party and were wiped out in Wales. They also did badly in some London boroughs but somewhat better in the so-called “red wall” areas in the North of England and the Midlands where large numbers of voters had come over to them at the 2019 general election after traditionally supporting the Labour Party.

Overall, the agreed verdict appears to be that, even though the results were mixed for the government, they were not as bad as expected – with some saying a cataclysm had been averted.

Prime Minister Boris Johnson described it as a bruising and tough night for Conservatives, with the voters sending a clear message to him and his colleagues – and he has quickly pledged to tackle inflation and the cost-of-living hike while seeking to create high-wage, high-skilled jobs. The political pundits say that, if the results were replicated at a general election, this would result in a hung parliament – and, in the recent trying circumstances for the Conservatives, such a verdict can almost be seen as a victory for them.

The experts judge that, since Labour did not do as well as planned, the Party is now in some turmoil after failing to achieve an electoral breakthrough. So it still does not look to be in a position to win a majority at the next election. What is more, the Labour leader, Keir Starmer, is now struggling to fend off questions about his alleged lockdown breaches which have suddenly taken centre stage and which the press are calling “Beergate”. Because of that, and his failure to make any real impact as opposition leader, some in the Labour party are starting to turn on him – and, if the police issue him with a fine over breaches of the lockdown, there are now suggestions he may even have to resign.

It is the case, therefore, that despite all the sleaze and setbacks and the typical midterm blues, the Conservatives remain very much in contention. Boris Johnson is said to have “dodged the bullet” and is like a Houdini who lives to fight another day. Members of his Cabinet are now expected to rally round him as a leader whom they may now see once more as an electoral asset – and that is yet another political turnaround for him. As I wrote recently, a week is a long time in politics. 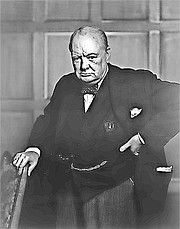 Britain’s legendary wartime leader, Winston Churchill, has remained such a towering figure over the years that as recently as 2022 he was voted by the public in a BBC poll as the greatest Briton in history. This was more than 35 years after his death in 1965 at the age of 90 when he was widely regarded as the most famous person in the world. He also, of course, later graced British banknotes.

It has been said that 100 years ago – when his political fortunes were faltering – Churchill remarked sarcastically that “far too much has been and is being written about me”. How little could he have known then how much more would be written about him in the future – even though some of it was produced by the man himself!

Now, yet another book about him has emerged entitled “Churchill’s Shadow” by British journalist and historian Geoffrey Wheatcroft, and published in 2021. This analyses and assesses his life and achievements and their continuing effect in modern times to the extent that his influence is still deeply felt today. But it is different from many others of the genre in so far as it adopts an unrestrained iconoclastic approach that amounts to a “warts and all” critical portrait of a man who has for long been regarded as a legend. For those interested in Churchill’s extraordinary, though far from perfect life, this is a must-read. It covers in detail the first part of the 20th century and the years leading up to the Second World War, which were considered by many to be a failure for him as politically he was at a low ebb. The author contends that at that time his contemporaries did not consider him to be a great politician; and it was not until he achieved his apotheosis – his vital role in rallying Britain and saving the nation from conquest by Nazi Germany which ultimately led to complete triumph – that he became so famous and took on his almost legendary status.

Wheatcroft’s stated purpose in his book is to examine Churchill’s legacy and what it means to posterity while also making sense of his monumental contribution to public life during such a long and varied life. Remarking that he not only made history but also wrote extensively about it, the author takes a hard look both at the great man’s reputation and the long shadow that he still casts as he looms large so long after his passing.

Of the various biographies of Churchill, the one by Andrew Roberts published in 2018 was regarded as undisguised hero-worship while extenuating his darker side. Roberts summed up why he became more popular after the Second World War in the US than in his own country, saying that in America he was increasingly admired and even revered and adopted as a national hero and made an honorary US citizen.

After a US tour promoting his book, the author stated that “enthusiasm for all things Churchillian in the USA is stronger now than at any time since his death” and that “Americans love Churchill for his foresight, humour, eloquence and physical and moral courage”.

By contrast, Wheatcroft claims that new recent studies have opened fresh perspectives on Churchill’s achievements and conduct. Whether or not that is really the case, he writes frankly about what may be considered Churchill’s imperial and racial attitudes and his controversial views on a range of issues like Zionism, Ireland and India. But, to my eye, while tending to overemphasise the negative aspects of his life, the author makes rather too much of his shortcomings, obsessions, follies, faults and failures. Many will also disagree with some of Wheatcroft’s more general findings, judgments and interpretations, though there is no space today to elaborate on that.

Despite any such shortcomings, this is a significant and most readable book about Churchill. Parts of it may irritate admirers of such a famous figure. But the author writes at the end of his work about Churchill being trusted most when things were worst, and the proof of that came “at the one irredeemably sublime moment in his life when he saved his country and saved freedom”.

It is a pleasure in today’s column to offer birthday greetings to my good friend Dr Michael Gerassimos who recently reached the wonderful age of 91.

Having practised as a doctor for more than 60 years in many different parts of the country – in various Family Islands, notably Rock Sound, Eleuthera, as well as here in New Providence – this well-known Bahamian is much loved by the many people he has treated over the years and by his wide circle of friends.

Often, when my wife and I have been out with him in public – for example, in restaurants – individuals have come up to greet him like a famous rock star! We quickly realised what an extraordinary impact he must have had on so many people over many years.

One recent instance that a friend recounted to me was when Gerry – as we all call him – was in Matthew Town, Inagua, about a year ago. He and some friends were attending the Sunday morning service at St Philip’s Anglican church there. Midway through his sermon, the vicar spotted Gerry in the congregation and came down from the pulpit to greet him effusively. Apparently, the good doctor was still well known on the island after having served there for a number of years as long ago as the 1970s.

He is also remembered, in particular, for travelling around his territories and ministering to his patients in the comfort of their own homes. So it comes as no surprise that he is both liked and appreciated by those large numbers of people whose lives he has touched and to whom he must have given such good service.

Some of his family members from England visited him recently after he had a fall outside his home and they and his circle of good friends locally are all so glad that he has recovered well and is almost back to his old self.

We have, of course, already celebrated his birthday with him. But I am sure I can speak for all concerned in wishing him well once again and saying to him: Keep going, Gerry. You are widely loved and respected and we wish you continuing good health – with many more birthdays to come.