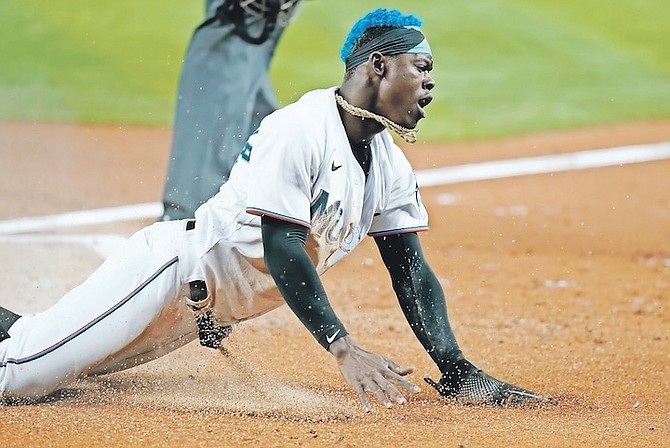 MIAMI Marlins’ Jazz Chisholm Jr. scores on a sacrifice fly hit by Jesus Aguilar during the first inning of a baseball game against the Washington Nationals, Wednesday, in Miami. (AP Photo/Lynne Sladky)

JAZZ CHISHOLM JR continues his transition to breakout star for the Miami Marlins and is not only a team leader, but among the league leaders in several offensive categories.

Chisholm overcame an undisclosed illness to go 2-2 with a walk, a triple, a home run, two runs scored and two RBI in Wednesday’s 5-4 extra-inning loss to the Nationals at LoanDepot Park in Miami, Florida.

Wednesday night’s gutsy performance began with a leadoff triple, but also included a game tying solo home run in the fifth inning, and a sac fly that sent the game into extra innings in the ninth inning.

The 24-year-old infielder leads the Marlins with seven home runs, six stolen bases, 27 RBIs and a .963 OPS. He also already has seven doubles and four triples.

He currently leads the leagues in triples, ranks fifth with a .617 slugging percentage, seventh with a .964 OPS, tied for ninth in RBI with former MVPs Bryce Harper (Washington Nationals) and Shohei Ohtani (Los Angeles Angels) and is one of just 24 players in the league batting over .300.

Chisholm was named to MLB Pipeline’s All- Rookie Second team in 2021 and credited his early improvement with improved pitch selection.

The Marlins open a three game series at home against the Atlanta Braves tonight.

Blue looks much better than the gold. Give the gold chains to charity...your star shines brightly enough