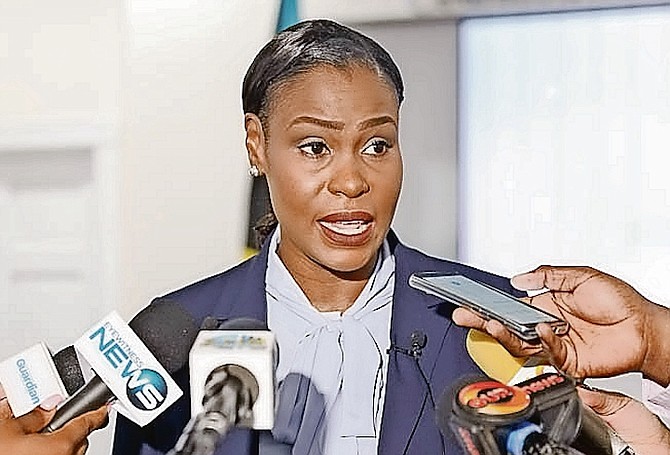 Her comments came after BPSU President Kimsley Ferguson said the union had not had a resolution to any of the issues it presented since the Davis administration took office.

Mr Ferguson’s comments were published in a local daily yesterday where he also said that nine-months into the new government’s term in office, there had been no resolve.

However, before yesterday’s Cabinet meeting the minister argued that work had been done and talks were ongoing.

Mrs Glover-Rolle was not alone in this position as Trade Union Congress President Obie Ferguson said he was of the view that the government was doing a “reasonably good job” in dealing with the unions and their issues.

Asked about the possibility of industrial action being taken, she said: “That would be very unfortunate because in the last four and a half years a lot of these union leaders have sat with their fingers and have not had anything to say, have not had any interaction with the government because the government previous didn’t allow that.

“In the last eight and a half months, we’ve met with, spoken with, and communicated with union presidents across the country via phone, in person meeting, messages and e-mails. So, the dialogue is happening. We’re back at the table in terms of our labour relations unit bringing the industrial relation agreements back to the table.”

She said government is looking to negotiate to see where they can assist the unions in closing matters. Moreover, she said there were many agreements that had expired, meaning "there was a lot of work to be done”.

“The labour relations unit was composed in October 2021 and since then the unit has been meeting with the Ministry of Finance, the Ministry of Public Service, and various unions ensuring they understand the way forward. So, I would say it's disingenuous to say that they don’t know where we’re going. We have communications and if someone doesn’t answer their phone when we’re trying to reach them that doesn’t mean that there’s no communication.

“I would also actually say it's ungrateful because the same public servants are doing the work that our employees and the union members do to ameliorate longstanding matters that haven’t been touched in years. They’re working long hours and long weeks to ensure that public service matters across the country, these same public servants, especially those in the Ministry of Public Service are working.

“So they are bothered when they hear persons that represent them saying nothing is happening because they’re putting in the work. I also think it's unreasonable because we have processed hundreds of matters in the last eight months.”

When asked if she believed the government is stalling on labour issues, the minister answered: “I know we’re not stalling. We’re meeting on a weekly basis to discuss these matters. If we’re stalling, how is it that we’ve presented already two counter proposals to unions to counter proposal.”

Mr Ferguson also noted the start of today's budget presentation and the contributions to follow and raised concern that allocations have not already been made for “whatever is going to be agreed between the union and the government”.

But Mrs Glover-Rolle said she disagreed with this.

She explained: “The country’s fiscal strategy report was released by the Ministry of Finance … the country’s financial state has been very transparent by this Ministry of Finance for our administration. To say that the government isn’t living up to what we’ve promised, we didn’t promise anything other than to handle the outstanding matters. We’re doing that. We’ve proposed. We’ve welcomed counter proposals which we’ve received.

“We’ve countered proposed and that process is going on. We are absolutely ensuring that we ensure that some level of payment, some level of amelioration, some return of increments which has already happened is going to happen but I want to make sure that the union leaders are also balanced because where there is this sense of entitlement for promotions, increments, and all of these things there should be a balance of productivity in the workforce.”

For his part, the TUC president said the Davis administration was attending to the issues affecting unions.

He said: “This government, the Davis administration, let me make it clearer, has decided to work with the union and to try to resolve things in an amicable way and in a reasonable way.

“The government is attending to the issues affecting the unions, not all, not yet, but there is a willingness to negotiate with the unions and come to a reasonable arrangement.”

He also said: “They are doing a reasonably good job after about seven months. You talking about four and a half years, we can’t have a meeting and we had to make some announcement that we made some improvement and that we’re meeting.”

Mr Ferguson said that he, along with his colleagues, had met with Prime Minister Philip “Brave” Davis at least three times since the September 2021 election, adding that this was a “big improvement”.