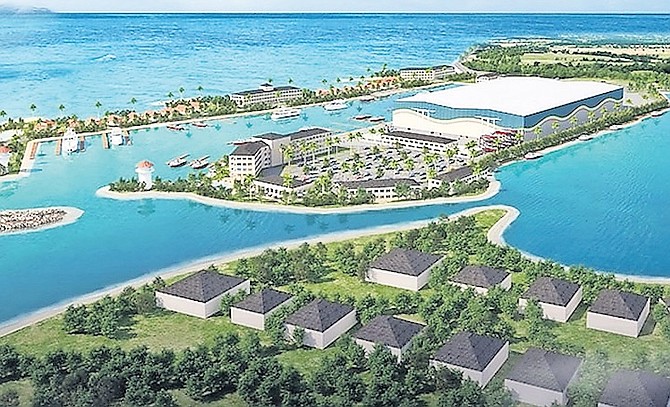 • Building will be able to withstand Dorian-strength storm

Legendary Marina Resort at Blue Water Cay, according to documents filed with the Department of Physical Planning, is also seeking permission to develop a 100-slip marina, marine service facility, boutique hotel, rental villas and a mixed-use office/retail component at a location right at the southern end of Fox Hill Road.

No details were provided for the number of jobs, or value of investment, that is involved in a development which will be largely constructed on land reclaimed from the sea via dredging. Maps and renderings obtained by Tribune Business show the development is proposed for a site almost due south of the Freedom Farm baseball field, which can presently be reached by driving due south past Checkers' Fox Hill outlet.

Florida-headquartered Legendary Marina, whose principal is Peter Bos, assembled the near-17 acres it requires for the project via a series of three real estate transactions worth a combined $4.15m. Documents show the sellers included Peter Andrews, the Bahamas Waste chairman, and fellow Bahamian businessman, Anthony Myers. The duo have close business ties as they both, for example, sit as directors on the Board of Bahamas Hot Mix (BHM).

Mr Myers yesterday confirmed to Tribune Business that the real estate deals had closed, adding that the other sellers also include Star Insurance and the Winner family estate. "I hope they make something of it," he said of Legendary Marina. "I hope they do it. We could never quite make it work. It's a difficult site, but he has a lot of energy and knows the market very well. I'm sure it will come off."

Phylicia Hanna-Woods, the Bahamas Investment Authority's (BIA) director of investments, confirmed that the Government's National Economic Council (NEC) had given "approval in principle" for the Legendary Marina Resort at Blue Water Cay to proceed in a June 16, 2022, letter to the developer's attorney, Allyson Maynard-Gibson KC, the ex-attorney general and Cabinet minister.

The approval granted permission for the investor "to own and operate a mixed-use community with a wide range of amenities including a marina, dry boat storage facility, clubhouse and residential component, swimming pool, utility services, resort accommodations and related amenities on Blue Water Cay subdivision situated on the eastern side of Fox Hill Road and south of Yamacraw Lake".

The approval was conditioned on Legendary Marina obtaining the necessary Town Planning Committee permits, for which a Town Meeting is being held on November 21, 2022; approval of its Environmental Impact Assessment (EIA) and Environmental Management Plan (EMP); and all other necessary go-aheads being obtained from the relevant government agencies.

Mrs Hanna-Woods' letter, though, said the NEC, which is really the Cabinet or a Cabinet committee, had rejected Legendary Marina's bid "to own and operate restaurants and retail facilities" - activities that are normally reserved for 100 percent Bahamian ownership only via the National Investment Policy.

Instead, the Government "recommended that the developer joint venture with a Bahamian for the operation of restaurants and retail facilities". The southern New Providence coast is relatively shallow, and the NEC approval indicated that Legendary Marina plans significant dredging - both for its marina and a channel that will give vessels access to deeper water - with the fill created used to reclaim land from the sea for the bulk of the project's real estate.

A Crown Land grant for "reclaimed land to be used in the project" was recommended, along with a seabed lease to Legendary Marina of an area - and on terms - that have yet to be agreed. The "approval in principle" also called for a Heads of Agreement to be negotiated between the Government and developer, with the latter gaining access to the tax breaks and other incentives available under the Hotels Encouragement Act.

Legendary Marina's project, if if gains the necessary approvals and proceeds to full build-out, will join an already-crowded New Providence marina market and, in particular, provide direct competition for nearby Palm Cay as the only south-eastern location that can serve as a jumping-off point for boaters headed to Exuma, Eleuthera and other Bahamian islands. Legendary Marina's website makes no secret that this will be among its key selling points.

Detailing what will set it apart from rivals, Legendary Marina said its proposed Nassau expansion "intends to be a full-service marina located near Yamacraw settlement on New Providence. The main feature will be what we believe is a first-of-its-kind in The Bahamas; a boat storage building capable of storing boats up to 53 feet in length inside, constructed to withstand winds up to a Category Five hurricane".

The developer added that this will be modelled on the boat storage facility at its marina in Destin, Florida, which it has just last month sold to a Texas-based marina owner and operator, Suntex Marina Investors. "At full build-out, the boat storage building will measure 580 feet by 345 feet with an eave height of approximately 60 feet," Legendary Marina said of its New Providence plans.

"Our facility will be capable of storing up to a maximum 600 vessels with lengths up top 53 feet anywhere from three to five levels." Explaining why this facility, and dry storage, is so attractive for boat and yacht owners, Legendary Marina added: "Boaters who come to The Bahamas by air will now have an ability to safely store their boat ready for use when they arrive.

"We anticipate that many people who were previously hesitant to boat in The Bahamas, and concerned about crossing the Gulf Stream, by being able to store their vessel in our facility will now travel to and boat in The Bahamas, thereby increasing tourism and stimulating the Bahamian economy." Boat owners will be able to use a phone-based app to request that their vessel be launched as needed.

The NEC's June 16, 2022, approval for Legendary Marina came around the time when a politically-laced row broke out over whether the Davis administration had bypassed the normal Budget process when it instructed Customs to eliminate the 10 percent duty on "pleasure vessels" after this was "inadvertently omitted from the Budget measure sheet".

The Government justified the move as making it cheaper, and easier, for persons to register their boats in The Bahamas rather than in Florida and elsewhere. It was also designed to spur the creation of a Bahamian yacht registry, and will also likely help Legendary Marina in encouraging persons to store their vessels at its New Providence facility.

The developer added that its project will include "marine service capabilities", and said its affiliation with OneWater Marine will help train Bahamian marine mechanics via a combination of apprenticeships and manufacturer-sponsored training. It also pledged to work with the Bahamas Technical and Vocational Institute (BTVI) and other schools to build "a pipeline of employment opportunities for Bahamians".

"This will bring marine repair business to The Bahamas instead of owners taking their boats back to Florida, as many do," Legendary Marina said. "Having in-house marine parts and service technicians at our facility is just another way that our marina will be set apart from others. The ability to obtain repairs by factory-certified mechanics in The Bahamas will encourage boat travel to The Bahamas and boost the tourism economy.

"The full development will be much more than just a marina. The full build-out will include gas and diesel sales, a restaurant, pool, hotel, beachfront rental villas, marine store, marine service centre and more." Legendary Marina executives met twice with Keenan Johnson, the Town Planning Committee chair, and Charles Zonicle, head of physical planning, this summer prior to submitting their plans.

The second meeting involved an August 31, 2022, site visit to Legendary Marina's Destin facility in Florida where they were accompanied by Mrs Maynard-Gibson and other Town Planning Committee members.

Wasn't this the land that flooded during Hurricane Matthew, right now. I'm not sure why any boaters were scared before but I don't see how their addition to the economy and acquiring of land will help anything much.

When all the tourists are on boats and cruise ships they'll be enjoying the Bahamas without the Bahamians.

What percentage of tourist traffic is currently isolated from Bahamians on cruise ships, yachts, and gated communities? I don't think that's a good thing for us.

I am sure this fits in with the new climate change policy the Government intends to pursue.

once again the PLP aka current govt does not understand the laws they helped to put in place. They once again put the cart before the horse. WHERE IS THE REQUIRED PUBLIC CONSULTATION AND THE REQUIRED PUBLISHED eNVIRONMENTAL iMPACT sTUDY? These are required to be in place BEFORE THE BIA can give any kind of approval. Such BS, but hey I'm sure there is absolutely no conflict of interest in the group of people involved. Why have laws if they are not even acknowledge to exist. Why obey the law if everyone else ignors it? can't expect people follow the basic 10 commandments in this country, time for a new dominant religion which can actually help instead of hinder?

Well, we're supposed to be poor, uneducated and desperate. So we praise any investment.

One of the last vestiges of bonefish in the New Providence area. They just won’t be happy until they crush all of the habitat. I love the way these people are all over every board (including National Trust) so I am sure that fast tracked permitting was part of the sale.

Yet more property going to be sold for millions, out of the price range of even the most upper of middle class Bahamian.

We continue to be shoved to the middle of the islands, poor and kept away from the ocean shores.