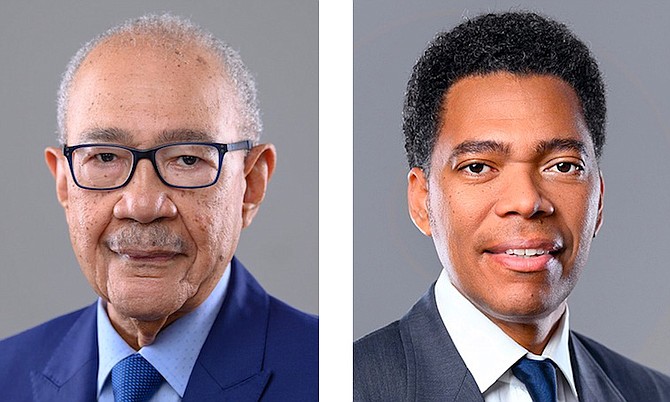 • Payments made at height of Baha Mar dispute

• Denies any link to Notarc Group ‘at that time’

China Construction America (CCA) paid $2.4m to a company run by the son of Sir Baltron Bethel, senior policy adviser and lead Baha Mar negotiator for Perry Christie, when the dispute over the mega resort was at its peak.

The payments to Notarc Management Group, whose chief executive is Leslie Bethel, are revealed in documents filed last Friday with the New York Supreme Court as the multi-billion dollar legal battle between CCA and Baha Mar’s original developer, Sarkis Izmirlian, resumed with a vengeance.

Both Sir Baltron and his son yesterday denied that CCA’s payments to Notarc Management Group influenced the former’s stance towards the dispute and its participants, or his advice to the Government and its actions, after Mr Izmirlian filed for a Chapter 11 bankruptcy protection in summer 2015. That move ultimately proved futile and led to his ouster as the $4.2bn project’s developer.

Sir Baltron told Tribune Business he had acted “with complete integrity and objectivity” on the Government’s behalf in helping to resolve the Baha Mar controversy, and there was no connection or interaction between himself and Notarc “at that time”. Leslie Bethel, meanwhile, asserted that claims of anything untoward over the $2.4m payments were “political mischief”, and that they were “unrelated” to anything to do with Baha Mar.

However, Sir Baltron admitted he NOW does have a business relationship with Notarc Management Group and his son after leaving government service following prompting by Tribune Business. This newspaper’s online research located an entity called the Panama Development Fund, which lists Sir Baltron as its “advisory Board chairman” and Leslie Bethel as deputy chairman. The website’s ‘investors’ tab has only one link - to Notarc Management Group.

Details of the payments to Notarc Management Group are contained in a report commissioned by Mr Izmirlian, and his BML Properties vehicle, to back their allegation that CCA “misused” $54m provided to “accelerate” construction work at Baha Mar to completion. They are instead claiming that the Chinese state-owned contractor employed the monies to finance its $57m acquisition of downtown Nassau’s British Colonial resort and the land upon which The Pointe sits.

The report by Paul Pocalyko, a certified financial forensics and fraud examiner with the HKA advisory firm, reveals the Notarc payments were made between December 2014 and January 2016. This was a 14-month period that covered the growing dispute between Mr Izmirlian and CCA that resulted in Baha Mar’s missed March 27, 2015, construction completion deadline, the subsequent Chapter 11 filing and court battle, and the original developer’s ouster.

He addressed the issue in a section designed to show that CCA’s Bahamian subsidiary “comingled” its finances with those of its affiliates and ultimate parent, China State Construction and Engineering Company (CSCEC).

“On September 9, 2014, CCA Bahamas entered into a Memorandum of Understanding with Notarc Management Group S. A. with the stated purpose of Notarc providing bidding opportunities throughout South America, Central America, Panama and The Bahamas,” Mr Pocalyko wrote.

“Despite the purpose stated in the document, defendants (CCA executives) maintain that Notarc did not provide services to CCA Bahamas in connection with the project, but rather was engaged solely by a separate CCA affiliate, CCA Panama, to assist in operations in Panama and Latin America.

The report broke down the $2.4m in to every single payment made by CCA Bahamas to Notarc over that 14-month period. They ranged in size from $7,164 to as high as $685,030, the latter of which was paid on October 30, 2015. “It is my understanding that payments to Notarc were made through Dion Leslie Bowe,” Mr Pocalyko wrote.

Dion Bowe is a Bahamian and Leslie Bethel’s business partner in Notarc. The Panama Development Fund website names Mr Bowe as its head of infrastructure, and a photo issued on May 18, 2022, shows himself and Mr Bethel signing an agreement with a Mediterranean Shipping Company (MSC) affiliate to take over construction of the $1.4bn Panama Canal Container Port.

Sir Baltron, declining to comment on the Pocalyko report because he had not seen it, vehemently denied that the Notarc payments represented any form of financial impropriety, undue influence or conflict of interest. “I would have had no relationship with Notarc,” he told Tribune Business.

“I dealt simply with the facts [on Baha Mar] and certainly was not aware of any dealings with Notarc. I had no interaction with Notarc at that time. I don’t see the connection at all.” Asked by Tribune Business whether he had any links and ties to Notarc now, based on the Panama Development Fund website, Sir Baltron replied: “Yes, there is a connection now, but certainly not with anything involving Baha Mar or CCA.

“I certainly did everything [involving Baha Mar] with complete integrity and objectivity in that matter... I had no relationship with Notarc at that time, and certainly not in this jurisdiction and elsewhere.” However, Sir Baltron did not answer whether he had benefited from the CCA payments to Notarc after leaving the Government following the 2017 general election.

Leslie Bethel was equally emphatic and dismissive in his denials of any wrongdoing relating the CCA’s Notarc payments. “You have clearly articulated what the commercial relationship was or is or had been with CCA,” he told Tribune Business. “It was for services unrelated to Baha Mar; it was for services related to activities we remain engaged in down in Latin America.

“The agreement between Notarc, our Latin American division and CCA was for commercial matters unrelated to Baha Mar. It’s that simple. There’s nothing further to comment on. The Baha Mar situation is much larger than any one of us as entities or individuals.

Notarc’s website describes the company as “a global advisory, investment and management consulting firm headquartered in The Americas, with worldwide offices and subsidiaries in The Bahamas, US, Panama, UK, Europe and the Middle East”. In its May 2022 release on the MSC tie-up, Leslie Bethel was described as its chief executive and Mr Bowe as chief executive of Notarc Port Investment LLC, which appears to be an affiliate.

The Baha Mar dispute, though, is not the first time that Leslie Bethel and Notarc have been drawn into controversy. He was forced some nine years ago, in late 2013, to deny that his family ties to Sir Baltron represented a conflict of interest involving prospective investment deals in The Bahamas.

The concerns were sparked after photographs of a London dinner meeting were published, showing both Sir Baltron and Leslie Bethel - as well as Mr Bowe - with then-prime minister Perry Christie outside the five-star Savoy Hotel in the Strand, London.

Mr Christie said upon his return to The Bahamas that Leslie Bethel had “extensive corporate connections” with Dubai, and had introduced him to a “very, very influential corporate personality” who was in talks with the Ministry of Tourism for a small luxury cruise ship to operate within the Family Islands. Leslie Bethel refuted the concerns then as “politically motivated or that of special interests”.

Meanwhile, the Panama Development Fund website reveals that another high-level Christie administration adviser is part of its “team”. That is Deepak Bhatnagar, an accountant, who acted as the then-prime minister’s guru when it came to numbers and financial figures. He is named as the fund’s head of energy and renewables for Latin America and the Caribbean.

Sir Baltron and Mr Bhatnagar often worked closely together. Under the first Christie administration, the duo served as deputy chair and managing director, and chief financial officer respectively, of the Hotel Corporation of The Bahamas.

Bahamian's consider this all good business. Corruption and low morales ain't no thing.

I think a royal commission of inquiry needs to be launched against the last Christie administration as it relates to their dealings with Baha Mar and the Number Boys.

SO what seems to be the problem? No doubt if the FNM government had used the wisdom of Mr: Bethel concerning the Our Lucaya in the first place, it would not be a problem today.

How not overwhelming feelin' will sets-in for members of the colony's business popoulaces', lackicin' in big money influence, despite completing all processes, amongst everything else like this and that set out by the central authorities, still were not successful in their dealings with central authority's respective departments. peoples ― Yes?

Bahamians are hurting more than ever today not because of high inflation, but because Perry "Vomit" Chistie, Baltron "Bag Man" Bethel, Allyson "Wicked Witch of The West" Maynard-Gibson, and a few others in their closely-knit group, have been selling the best our nation has to offer to some of the most corrupt and evil corrupt officials within the politburo of the Chinese Communist Party. But what do you care @birdie.

Just business as usual for the PLP, corruption smeared from top to bottom. Does anyone need their roof re-shingled.