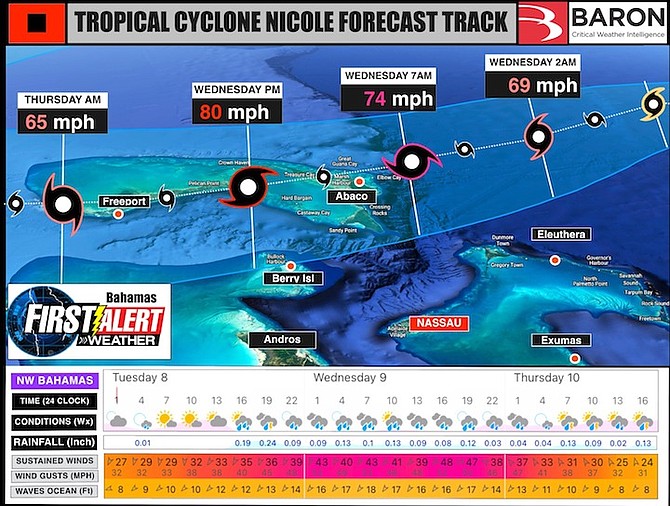 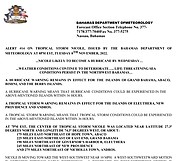 10.00pm UPDATE: The Bahamas Department of Meteorology says Tropical Storm Nicole is likely to become a hurricane by Wednesday, weather conditions continue to deteriorate and life-threatening sea conditions persist in the Northwest Bahamas. (See document on the right)

9.45pm UPDATE: As conditions began to deteriorate in Abaco due to Tropical Storm Nicole’s approach, government officials continued to urge vulnerable residents in the storm’s path to seek safer ground – as some have failed to evacuate areas considered unsafe – full story HERE.

4.00pm UPDATE: Bahamas Power and Light has suspended electricity disconnection in islands subject to storm warnings, Works and Utilities Minister Alfred Sears said today. This comes as residents of Grand Bahama, which is projected to take a direct hit from Tropical Storm Nicole, are urged to take shelter or evacuate any low-lying areas or compromised structures. Those in temporary structures in Abaco, especially North Abaco, were urged to evacuate as well. 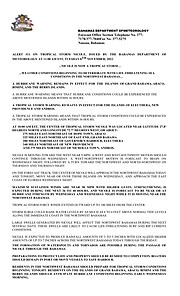 The latest information from the Bahamas Meteorological Department shows that Tropical Storm Nicole has shifted northward and away from New Providence. As such, LPIA will continue operations on Wednesday, November 9, 2022 should there be no significant change in the current path of Tropical Storm Nicole. LPIA and its stakeholders continue to be advised by the Bahamas Meteorological Department and will provide continued updates on airport operations.

Persons are asked to visit LPIA’s webpage and social media channels for the latest information on airport operations. The public is encouraged to contact their respective airlines for flight updates. A listing of all airlines and their contacts can be found on LPIA’s website at www.nassaulpia.com.

• The Bahamas Department of Meteorology has said weather conditions are beginning to deteriorate with life-threatening sea conditions in the Northwest Bahamas. (see document on the left)

• The Cabinet Office has advised that all government offices, except for essential services, are closed as of noon today. 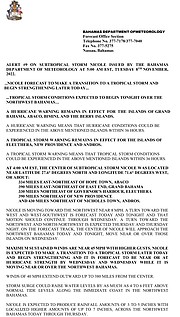 WITH Grand Bahama and Abaco projected to take a “direct hit” from Subtropical Storm Nicole, Acting Prime Minister Chester Cooper urged residents in low lying areas and those in compromised structures to evacuate.

He said law enforcement officials will be providing evacuation assistance before the storm, but stressed that once conditions deteriorate, emergency responders will be “constrained” to provide help until the all clear is given.

Forecasters predict the storm will pass directly over Grand Bahama, with Abaco poised to feel harsh impacts of the system as well. The two islands are still reeling from the devastation Hurricane Dorian brought in 2019. 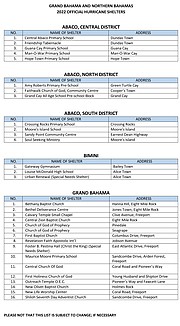 Nicole is expected to strengthen into category one hurricane by Wednesday, however last night a Department of Meteorology forecaster said the storm should be out of the country and in the vicinity of Florida at that point.

However, officials stress that storms rapidly intensify and change, adding the threat should not be taken lightly.

Tropical storm conditions in the Berry Islands are expected around Wednesday at 12am, 2am on Wednesday in New Providence and 5am in Bimini.

“What I want to say to all Bahamians and residents, but particularly those in the north and central Bahamas is that we must take the threat of Hurricane Nicole seriously,” Mr Cooper said in a live address from the National Emergency Management Agency last night.

“I cannot stress enough that it is better to make preparations and not need them than to take no precautions and regret it.

“Abaco and Grand Bahama are projected to take a direct hit from Hurricane Nicole. Bimini and Berry Islands are also in the path of the storm. Residents of those islands should take every precaution to secure themselves and their property immediately.”

Schools and government offices in the mentioned islands will be closed today until the all clear is given. Airports and seaports on the affected islands are expected to close when the wind reaches 40 knots or higher, he said, adding that it is anticipated this will occur this evening.

“Nicole is expected to come when seas are already at a high tide, increasing the chance of flooding. We are strongly urging everyone in low lying areas, particularly in east and west Grand Bahama and Abaco to move further inland. We are asking everyone living in domes, trailers and structures on Abaco and Grand Bahama in particular that are not up to code to make immediate plans to evacuate, to move to a hurricane shelter or another safe place.

“I assure you that all agencies of government under the command of NEMA are engaged and mobilised throughout the country. They will be providing evacuation assistance before the storm arrives. I reiterate that police and defence force officers, and emergency personnel will be providing evacuation services before the storm arrives but will secure themselves once danger presents itself.

“We repeat our requests that you not try to ride out the storm in domes, trailers, makeshift residences or low lying areas as emergency services will be constrained to provide assistance until the all clear is given,” Mr Cooper said.

At a press conference earlier yesterday, NEMA Director Captain Stephen Russell also urged Bahamians on the islands in the track of the storm to take shelter and heed evacuation orders.

He added: “I cannot ask emergency responders to go and yuck persons from areas that have been declared evacuation zones. But we can encourage persons as best we can.

“I cannot send back emergency responders after you refused and changed your mind. We will come one time and say it’s time to move. If you don’t want to go, just give us your next of kin and the team will move on.”

Last night, he said all shelters in warning areas will be activated at 9am today. He added that plans are in motion to evacuate people from Grand Cay and Sweeting’s Cay to mainland Grand Bahama this morning.

Nicole was moving at 45 mph yesterday towards the northwest at eight mph.

“The wind field is fairly large, it extends outward up to 275 miles. We expect rainfall between Wednesday and Thursday to be two to four inches with local maximum amounts of up to six inches. Storm surge amounts of up to three to five feet are expected as well.”

The storm was initially expected to be a category one hurricane as it moved across Grand Bahama, but last night Geoffrey Greene from the Department of Meteorology said that forecast has changed.

“The storm was projected to be a hurricane as it crossed the Grand Bahama area, however (on) further update, that system will now be out of The Bahamas when it becomes a hurricane — near the West Palm Beach area of Florida,” he said at a press conference.