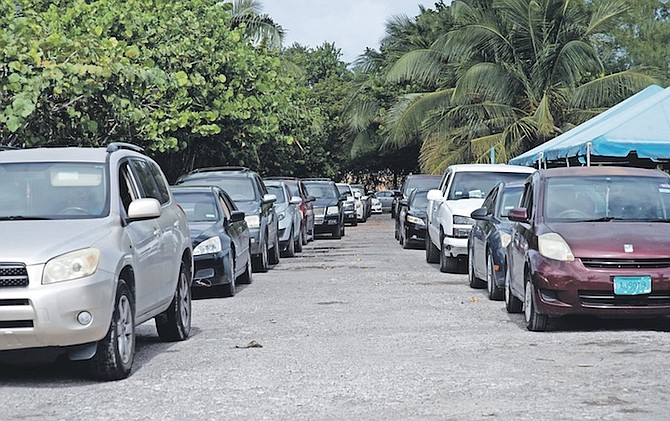 NEW Providence residents seemed generally unbothered by the arrival of Tropical Storm Nicole as many were casually preparing around town.

Forecasters predicted that residents in New Providence would begin to experience tropical storm conditions last night. The storm is expected to affect Grand Bahama as a category one hurricane today, while bringing tropical storm force winds to Abaco.

The Tribune canvassed several grocery stores yesterday where shoppers were casually stocking up on a few items for Nicole.

Anthony Eulin, who was at Xtra-Value, said he was not fearful about Nicole and the impact it may have.

“There’s no hurricane coming here, we’re only going to have a lot of rain, that’s it. We are going to be straight; this is a praying nation and country,” he said.

Mr Eulin told this newspaper he was just in the store stocking up as he regularly does.

Many shoppers shared the same opinion as Mr Eulin in terms of them not feeling a sense of urgency to rush to the store, but mainly went to get essentials items.

The aisles in the food stores were scarce with shoppers throwing a few items into their carts.

Another shopper, Debra, who was accompanied by a friend, said she had waited in a long line at Purity Bakery before going to the store.

She said: “We were loaded down with loaves of bread. I got about six and she got about five. Up at the bakery they had a long line, it’s amazing to see the people out already on the streets.”

Although Debra said she did make the effort to get a few food items to prepare for Nicole, she said she was not in a state of panic about the arrival of the storm.

She said: “I did not panic, for me I didn’t even know the schools were closing today (Tuesday) and that government offices were closing until this morning (Tuesday morning).”

However, when this newspaper visited the water depot of Chelsea’s Choice on Abundant Life Road there was a massive line of cars that wrapped around the street causing a halt in traffic.

Customers were anxiously waiting in their cars bumper-to-bumper, as they hoped to eventually get served.

Larry Martin told this newspaper he was on the water line for over two hours as he waited to get his water bottles refilled.

“I was parked on the line from 9am this morning; it’s 11.30 am now. It’s just ridiculous you know. The line is moving, but it’s just slow at snail’s pace.

“I got my seven bottles to fill because we aren’t sure what this storm is going to do,” Mr Martin said.

Another customer on the line also complained about the long wait, but said she was grateful that the line was moving. She also suggested police should have been in the area to control traffic so things could have been smoother.

An assistant operations manager at Chelsea’s Choice Water admitted that yesterday morning was chaos with the number of customers waiting to get drinking water.

“At 7.15 am (yesterday) we started serving the cars to get them out, not only because of the storm travelling. We normally do that because people have to go to work or do school runs.

But this morning (yesterday) was chaotic. I had the line around the corner. I had two lines this morning, so I opened the gate extra early to get traffic off the street,” the manager said.

The manager also clarified that the water depot did not run out of water yesterday, but had a technical issue with one of its machines that caused a delay.