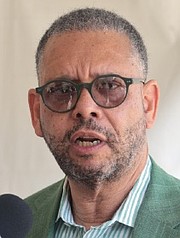 The Bahamian tourism industry has not suffered a “material” reduction in bookings and guests despite now-Hurricane Nicole striking Grand Bahama and Abaco, a senior hotelier said yesterday.

Robert Sands, the Bahamas Hotel and Tourism Association’s (BHTA) president, told Tribune Business that while there had been some “shrinkage” due to the late-season storm it had not created “an overwhelming impact” and the industry was moving forward with preparations for the upcoming Thanksgiving holiday.

“I think there’s no question that this late season storm has interrupted what has so far been a smooth, uninterrupted rebound of our tourism season,” he said. “We’ve certainly seen some diversions of cruise ships and certainly seem some early departures of guests at a number of hotels and airports, not so much because they are closed but flights have been cancelled.

“We’ve seen some reduction in arrivals at this time, but I can say confidently that it’s not been an overwhelming impact. There’s also been some redundancy, with some guests unable to get in and others unable to get out. There’s been some shrinkage of business over this period, but nothing I would say that is significantly impactful.”

Mr Sands pointed out that Lynden Pindling International Airport (LPIA) remained open throughout Nicole’s passage through the northern Bahamas, adding that this was vital since it acts as “the gateway to the substantive part of the room inventory”.

Suggesting that 75-80 percent of the tourism “shrinkage” experienced this week had been due to the storm, the BHTA president added: “It is very difficult to give the reasons for the shrinkage, as there could be multiple factors to this. I would say at least 75-80 percent of it has been impacted by the storm, but the actual numbers are not material. We do not anticipate any run-off effects, especially given that Thanksgiving is close - two weeks away.”

Mr Sands said of potentially greater concern was Nicole’s impact on Florida, which remains a major visitor source market for The Bahamas, and provides the critical port infrastructure that facilitates the cruise industry as well as the airport hubs that provide stopover visitor access to these shores. The US state is also a key logistical and supply chain centre for the resort industry and entire Bahamian economy.

“The quicker it arrives and departs Florida with minimal negative impact, we’d consider ourselves home free,” he added. “I think it’s important to say that we hope that, notwithstanding Grand Bahama and Abaco are getting the worst of this storm, their recovery is quick and that their damage is minimal. I think it will be all hands on deck for a speedy clean up to get us back to a quick sense of normalcy.”

Based on numbers he provided, the storm appears to have cost Nassau Cruise Port some 6.5 percent of its November passenger forecast and a similar percentage of its anticipated vessel calls. Mr Maura confirmed that half the eight cancellations, those involving the Enchantment of the Seas on Monday; the Disney Wish and Liberty of the Seas on Tuesday; and Freedom of the Seas yesterday came following calls from the cruise lines themselves.

The other half, namely the Carnival Liberty, Independence of the Seas, Carnival Sunshine and Anthem of the Seas were due to the Port Department’s decision to close all Bahamian ports with effect from 7am Tuesday morning due to the approaching storm. Mr Maura said Nicole’s fall-out will drop forecast vessel calls on Nassau to 110 for November.

“Leading up to this week, and prior to the arrival of this storm, we had forecasted 118 cruise calls for the month of November,” he told Tribune Business. “With the loss of eight calls, we have adjusted downward and are now expecting 110. For December we have forecast 121 calls.

“We had forecasted, prior to this storm, 411,570 total passengers for November and now that will have to be adjusted downwards by approximately 27,000. Then in December, which we do not expect to be negatively impacted by storms such as this, our 121 calls are forecast to bring 412,634 passengers.”