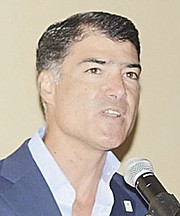 Sarkis Izmirlian is doubling down on allegations of “shocking evidence” that Baha Mar’s main contractor “paid illegal kickbacks to the family of Bahamian officials” as part of a plot to seize Baha Mar and establish “Chinese control”.

The Cable Beach mega resort’s original developer, in filings with the New York State Supreme Court last Friday, raised the temperature in his $2.25bn fraud and breach of contract claim against China State Construction (CCA) by threatening to reveal the “damning evidence” if the dispute makes it to a full trial.

Mr Izmirlian, whose family live at Lyford Cay, did not name the families or officials who he was referring to. However, the legal documents suggest their identities may be revealed - along with evidence of the alleged bribes and corruption - before the New York courts should the case reach that stage.

In a blistering opening salvo over their bid for “partial summary judgment” against CCA and its affiliates, the Baha Mar founder and his BML Properties vehicle said that despite failing to complete the multi-billion dollar project on time and on budget when he was in charge, the Chinese state-owned contractor was retained to complete the mega resort - and received a $700m “windfall” - for doing work it should have completed under himself.

“However, discovery in this case has revealed shocking evidence of CCA’s fraud and breaches of contract. CCA intentionally delayed construction to extort payments from BML Properties. CCA authorised hundreds of workers to leave the project during the crucial pre-opening period. CCA diverted management and staff to competing projects. CCA paid illegal kickbacks to the family of Bahamian officials to protect CCA’s position.

“And CCA conspired with other Chinese entities to stop construction. Why? To ensure that the resort and casino were transferred fully over to Chinese control.” Baha Mar is now owned by Hong Kong-headquartered Chow Tai Fook Enterprises (CTFE), with Tribune Business having previously revealed evidence suggesting CCA and the resort’s financier, China Export-Import Bank, had long decided it should be a Chinese buyer after ousting Mr Izmirlian.

“Here is a small sample of the damning evidence that the court will see at trial,” the original developer pledged in his legal documents. “Despite representing to BML Properties and multiple governments that defendants could and would substantially complete construction before April 2015, defendants [CCA] admitted in a contemporaneous internal document that their schedule ‘was a stretch and aggressive, and could probably not be met’.

“Defendants removed hundreds of workers from the project after promising BML Properties to increase their labour force. Defendants conceded in an internal letter that defendants’ failure to deal with the project’s manpower issues would cause ‘irreparable and catastrophic losses’, and that ‘the completion target of the Bahamas project will not be achieved’.

“Just nine days before the promised opening date, defendants were privately contemplating ‘a complete shutdown of the work’ on the project in order to gain ‘negotiating’ leverage over BML Properties. Defendants later instructed their employees to ‘freez[e] all the handing over progress’.”

Mr Izmirlian said this ultimately resulted in his ousting as Baha Mar’s developer, with his family losing their multi-million dollar equity investment in the project. He alleged, though, that CCA made out quite nicely after it was paid $700m by China Export-Import Bank, its fellow Chinese state-owned institution and Baha Mar’s main lender, to complete construction.

“Just as CCA had plotted, a new Chinese company, Perfect Luck, obtained control of the project. Yet CCA stayed on as construction manager, despite its past failures. CCA then received at least $700m in additional payments to complete the same work CCA should have done years earlier for BML Properties.

Among the documents filed by Mr Izmirlian to support his case was an e-mail authored by Jason McAnamey, CCA’s executive director for mechanical, engineering, plumbing and fire protection (MEP/FP), who warned that the Chinese state-owned contractor that it was promising to hit deadlines it could not meet ahead of the missed March 27, 2015, opening that proved so fatal to the former developer’s ownership.

“Can someone please explain to me what about the words that came out of my mouth were not clear and understood about the fire and smoke control systems,” Mr McAnamey wrote. “That the original date of the end of February [2015] was a stretch and aggressive, and could probably not be met. And now it’s mid-January. We will never learn.”

Among other previously unpublished documents was a March 18, 2015, letter from Yuan Ning, CCA’s president, to Chen Guocai, vice-president of CCA’s parent, China State Construction and Engineering Corporation (CSCEC), threatening that the contractor will “take extreme measures such as a complete shutdown of the work” just nine days before Baha Mar was due to open.

Revealing that CCA was mulling such action as a means to force Mr Izmirlian and Baha Mar to pay the contractor what it felt was owed, Mr Ning wrote: “In addition to the shortage of funds, The Bahamas project owner [Mr Izmirlian] has still not approved the construction progress payment of CSCEC in February.

“Under such circumstance, we believe and suggest that only by taking extreme measures such as a complete shutdown of the work is it possible to bring the three parties back to the negotiating table to fully and completely solve the problems of lack of funds and payment of construction funds.”

Describing this as “a special report”, Mr Ning urged his superior that it was an “urgent matter” and he needed to give instructions on whether CCA should down tools in an effort to gain leverage over Mr Izmirlian and Baha Mar to force payment.

Meanwhile, Tiger Wu, CCA (Bahamas) executive vice-president, admitted in a sworn deposition that he allowed 700 Chinese construction workers to leave the Baha Mar project site and return to their homeland between December 2014 and February 2015 - right when the contractor was supposed to be delivering on promises to ramp up and accelerate construction work to meet the March 27, 2015, opening.

Asked whether he obtained Baha Mar’s permission to send those workers home, Mr Wu initially demurred. “I don’t recall if there’s any requirement for us to receive Baha Mar’s consent on the workers. But Baha Mar, they were aware the workers were going home,” he said.

However, under repeated questioning Mr Wu admitted this permission was not obtained. “Now, I think, your previous testimony was that additional workers on the project might help reach the substantial completion date of March 27, right?” the interrogator asked. Mr Wu replied in the affirmative.

“Okay. So given that, why did you approve over 700 workers going back to China during this period?” the CCA executive was asked. Mr Wu replied: “As I said, for any typical project, when it come to the final finish stage, the labour is going to gradually ramp down.”

Name and shame, doesn’t work in The Bahamas anymore, especially since most of these corrupt people already moved off the scene. And may have been replaced by more corrupt and shameless people. And word is one former PM, whose hands may be in this in more ways than one, is having memory loss, which may be in his favor.

The premiership of "Brave" Davis, hadn't been sworn-in as the colony's new government until 17 September 2021. FTX hadn't yet exited Hong Kong, so, must've been prior negotiations underway, directly with the RedParty's administration.

Might helps to explain the silence imposed by Thee Mr. Minnis and sidekick Pintard.

Will plead that they're sworn to cabinet secrecy ― Yes?

They is Stoopid Tal always trying to muddy da waters? How does this comment be connected with Sarkis Izmirilian

@ComradeJohn, simply put, hardly a Tribune edition goes to print where the newspaper's reporters and editors are read as being the print media's official mouthpiece for highlighting the all Thee Mr. Minnis and sidekick Pintard are quick to run their mouths to complain.

About everything that is bad and corrupt under the premiership of Comrade "Brave" Davis ― Yes?

So you then are creating your own print media… carry on thence..

The bottom line is when there's compelling news about a colony headquartered crypto currency miner, the King's official opposition has imposed a code of silence across RedParty's House-seated MPs' and appointed members seated in Upper Red Carpeted Cambers ― Yes?

Don't worry John. We know exactly who you're talking about and so does Tal. It will all come out in the wash but as you say name and shame don't work around here so the supporters of THE most corrupt party will still be staunch, rowdy and blissfully ignorant.

I still don't understand what the US courts have to do with Bahamar? If I get into a conflict with a Bahamian construction company, I can sue them in NY?

When the agreement was signed they most probably said that should there be any dispute it would be up to the Courts in New York to deal with. Happens a lot. Shows how much people trust our court system.

I think CCA headquarters for the region are in New York.

Mr Sarkis has my sympathy , it is not easy to loose ones investment , the truth will be told but it may not be illegal , many loose their homes it may come to what contracts one signs

Merely business as usual here, just on a bigger scale.

Just maybe when the people involved in this titanic scam are named in a US court of law then one of the Bahamians honored by our late sovereign will have that honor rescinded. We can surely hope so.

Every last one to be named would probably be named as a.national hero, if they haven't been named already. What a disgrace. We can do nothing about blatant , daylight corruption.