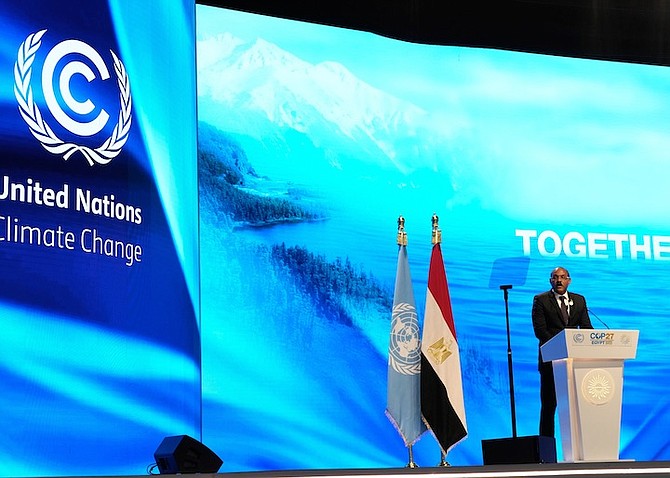 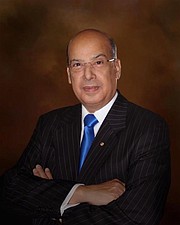 SHOWING all the frankness that he demonstrates in his domestic politics, Antigua and Barbuda’s Prime Minister, Gaston Browne, marched fearlessly like Daniel in the Lion’s Den, when he made several demands in Sharm El-Sheikh, Egypt where COP 27 is being held.

To one bad extent or another, Climate Change, and its attendant global warming, is destroying island nations by increasingly frequent and more intense storms, and by constant erosion of their limited and precious land mass.

Prime Minister Browne spoke for the people of these countries when he told world leaders at COP 27, “We don’t want to be climate refugees in anybody’s country. We want to maintain our civilisations that have existed for hundreds of years”.

The Antigua and Barbuda Prime Minister, who is also the Chair of the 39-member Alliance of Small Island States (AOSIS), insisted that the world’s major polluters, which have contributed the most to the destructive impact of Climate Change, have a responsibility to pay for the damage that they have caused and continue to inflict. He was fearless in calling out not only the longest polluting countries, such as the United States of America (US) and European nations, but also China and India - more recent large polluters.

It can hardly be fair or just that the governments of 32 nations should be pursuing policies that result in the destruction of livelihoods in almost 200 territories, particularly as the latter contribute the least to global pollution. For instance, the 39 small island states of AOSIS together contribute less than 1% of global CO2 emissions.

While arguing that “large-polluting countries must take responsibility for the torts that they are committing on all humanity”, Browne accepts that China and India should be accorded “special and differential treatment” in meeting their responsibilities.

In making the case for “loss and damage” to be included in the agenda of COP 27, and for the launch of a Fund to provide monies for impacted countries to build resilience to Climate Change, the Prime Minister acknowledged that China and India, although now large CO2 emitters, should not be required to contribute in the same way as countries in Europe and North America that have been creating the conditions of Climate Change for almost two centuries.

He was right to spell out the problem as courageously as he did. As he explained, China and India should pay “what is equitable and fair”, but the “bigger share of responsibilities still lies with the developed countries that have been historically responsible for planet-warming greenhouse gas emissions”.

In all of this, Browne was championing the rights of the people of all small island states. Standing up for those rights requires a commitment to justice and equity. It also requires fearlessness and gumption, both of which Gaston Browne has shown he will employ in defence of the rights of his own people and the people of other small island states whose existence is severely threatened.

As matters now stand at COP 27, no one should hold their breath that anything concrete will be delivered regarding “loss and damage”. On the date this commentary is being written, November 17, a 20-page draft agreement is on the table for negotiation in Egypt, but, so far, it only “welcomes” the beginning of discussions on launching a loss and damage fund. The draft includes no details for launching it.

It is unlikely that the world’s polluters will agree to a Fund for loss and damage. China and India have already made it clear that such a Fund should be established by Western nations. Countries, like the U.S. and the EU, do not accept that China, now the second largest economy in the world, and India, now the fifth largest global economy, can any longer describe themselves as “developing countries”, or escape their obligations in the context of Climate Change.

On November 16, the EU Commissioner for Climate Action, Frans Timmerman, declared that “China is one of the biggest economies on the planet with a lot of financial strength. Why should they not be co-responsible for funding loss and damage?”

Clearly, Gaston Browne was realistic enough to have no high expectation that COP 27 would effectively address loss and damage, even though he might have held out a remote hope. Therefore, at COP 27, he also called for the major oil and gas corporations to pay a global carbon tax which could be included in a loss and damage fund. He pointed out that, in the first half of this year, six fossil fuel companies alone had made nearly US$70 billion in profits - “more than enough money to cover the costs of major climate damages in developing nations”. This call was also made by UN Secretary General, António Guterres, Barbados’ Prime Minister Mia Mottley and leaders of Pacific island-states.

But the oil majors have argued that if they are taxed, they will not be able to invest in new oil production, which the US and the EU nations want them to do, to compensate for not buying Russian oil. The powerful oil lobbies in North America and Europe will work to ensure their governments continue to protect them.

Nonetheless, Browne was right to expose the huge profits that are being made by the major oil companies, and to identify, for the governments of large polluting nations, a large source of the money needed to create a loss and damage fund.

At COP 27, the Antigua and Barbuda Prime Minister acknowledged that small countries can be ignored, and their interests shunted aside by large and powerful nations. Consequently, he announced that “not as an act of hostility, but to seek justice for small island states”, he and the leaders of Tuvalu, Palau and Niue will use international law and international arbitration “to explore the responsibility of States for injuries arising from internationally wrongful acts caused by the breach of their obligations”. Seventeen seasoned international lawyers will advance that case to the International Tribunal of the Law of the Sea.

Prime Minister Browne has shown his fearlessness in standing up for the small and the vulnerable in a world which, increasingly, is witnessing a return to the dangerous policy that might is right. There is benefit in his gumption and his candour in fighting for justice.