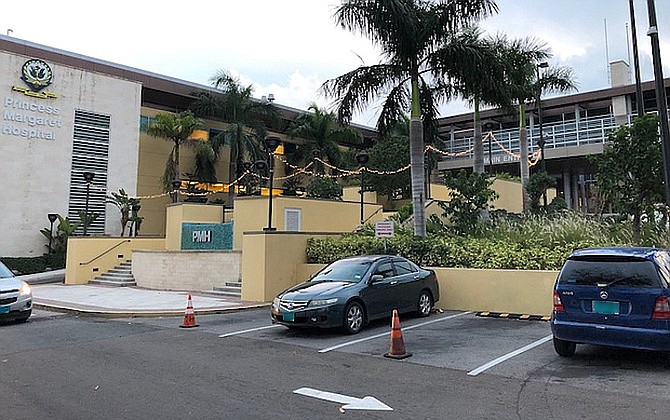 A CONTRACT for renovation works on the Children’s Ward at Princess Margaret Hospital is expected to be awarded before the end of the month.

Photos showing missing ceiling tiles, cracked floors and hospital supplies piled up on each other were recently sent to this newspaper, highlighting the desperate need for renovations at the Children’s Ward.

Upon seeing these photos, The Tribune contacted Health and Wellness Minister Dr Michael Darville, who confirmed that the sights depicted in the photographs were sections of the paediatric ward.

He said upon assuming office last year, he found portions of the ward in a bad state and blamed the Minnis administration for not addressing the problem.

“We have structural issues with that section of the hospital and a contract will be awarded before the end of the month to start renovation from the foundation up. That is how they left the hospital upon leaving office. We will do our part to fix it,” he told The Tribune recently.

The Tribune understands that when the former administration was in office, several conversations were held about the need for extensive renovations at the paediatric ward.

Various proposals were even submitted to the then Minnis-led government by the Disney corporation, who wanted to fund as well as manage the actual renovation project at a cost of some $5m under a Disney-centred theme, this newspaper was told.

However, those plans never materialised.

Sources familiar with the situation said it fell through because a decision was made by the former government to not proceed with Disney’s proposal.

They could not say why when asked by this newspaper.

When contacted, former Prime Minister Dr Hubert Minnis said he was advised that Disney wanted to inject some $5m into the ward’s redevelopment, but said those monies “never materialised” and gave no reason why.

He also blamed Hurricane Matthew for leaving the ward in a bad state, adding that total costs of repairs would be in the millions of dollars.

“What happened is the PLP had experienced a hurricane in 2016 - I think it was Matthew. Matthew had blown out all windows on that ward and totally destroyed that area. When we came, we recognised that it needed millions of dollars of work to repair and bring it up to what we would call international standards,” Dr Minnis said in a recent interview with The Tribune.

“We subsequently contacted the Beck Group out of Texas and the Beck Group had volunteered one of the architects to complete the design. If the government is interested, they can contact the Beck Group. The design is finished and they can proceed. Disney also toured the facility and Disney, I am advised, (that) they would infuse about $5 million, but - that monies never materialised.”

Former Health Minister Dr Duane Sands also gave some insight on the situation, saying when the former government was in office, there was a “significant amount of discussion” about the role Disney would play on the redevelopment of the paediatric ward.

However, he said while Disney had expressed interest to assist with renovation works, he didn’t believe there was an actual written commitment from them.

“There was a significant amount of discussion about the technical, the assistance of Disney in the renovation of the children’s ward, the method by which that would happen and the foundations that would do it, which terms and so on and so forth and I think it required a kind of expression of interest okay,” Dr Sands said yesterday.

“So, in terms of an actual written commitment, I don’t think it would be correct or accurate to say that they had made a commitment. What they did do was to express a sincere interest in assisting and I don’t think that they got the kind of supportive response to allow them to move further.”

I just can't put in words the disgust I have for those people/entities that let this hospital become such a shite hole. If the new King comes here I will personally invite him to walk through the entire hospital to view what we think of the Princess Margaret name.