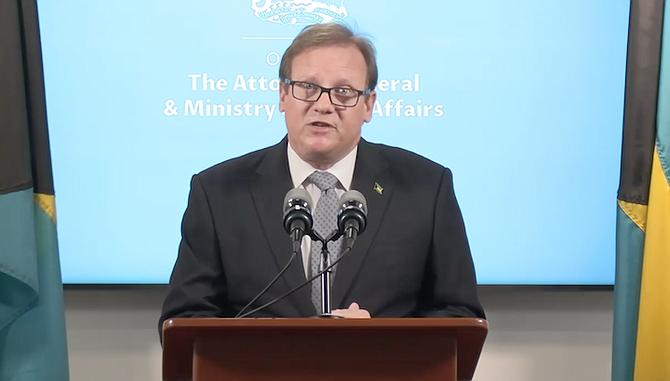 The Attorney General last night blasted that it was “a gross oversimplification of reality” for the world to blame The Bahamas for FTX’s collapse as no country had moved “as quickly” to tackle the crypto exchange’s implosion.

Ryan Pinder KC, in a national address that sought to rebut international criticism of The Bahamas’ actions and digital assets regulatory regime, while also seeking to reassure Bahamians that the Government is moving to protect the country’s reputation, hailed the Digital Assets and Registered Exchanges (DARE) Act for providing the tools that allowed the country to respond more rapidly than any other.

The Bahamas appointed a provisional liquidator for FTX Digital Markets, the crypto exchange’s Bahamian subsidiary, one day before 134 other entities in that group were placed in Chapter 11 bankruptcy protection in the Delaware federal courts.

Mr Pinder yesterday effectively accused John Ray, the chief executive appointed for all those companies as a result of the Chapter 11 move, of deliberately misrepresenting actions taken by the Securities Commission of The Bahamas to protect FTX Digital Markets’ creditors and investors in his desire to earn a steady stream of legal and consulting fees from the crypto exchange’s implosion.

Mr Ray, in filings with the Delaware bankruptcy court seeking an Order that the Bahamian joint provisional liquidators’ bid for US legal recognition be switched from New York to Delaware, made accusations that the Government “directed unauthorised access” to FTX’s systems, and aided the withdrawal of digital assets, in violation of both local and American court orders.

However, Tribune Business has seen an emergency Bahamian Supreme Court Order, dated November 12, 2022, that gave the Securities Commission lawful permission to transfer assets potentially worth millions of dollars from FTX Digital Markets to “a safer space” amid fears they were about to be stolen by hackers.

Mr Pinder, moving to defend the Bahamian legal and regulatory system, and its response to FTX’ collapse, said: “It is extremely regrettable that in Chapter 11 filings for bankruptcy protection made in New York [sic, Delaware] last week that the new chief executive of FTX Trading Ltd, not the Bahamas-based FTX Digital Markets but an affiliate company incorporated in Antigua and Barbuda, misrepresented the timely action taken by the Securities Commission and used inaccurate allegations lodged in the transfer motion to do so.

“It is possible that the prospect of multi-million dollar legal and consultant fees is driving both their legal strategy and the intemperate statements. In any case, we urge prudence and accuracy in all future filings.” Mr Pinder also suggested it was convenient for other jurisdictions, and the international media, to pin blame for FTX’s collapse on The Bahamas when many of those countries had not yet implemented specific digital assets regulatory regimes.

“Any attempt to lay the entirety of this debacle at the feet of The Bahamas, because FTX is headquartered here, would be a gross oversimplification of reality,” he asserted. “The dozens and dozens of companies involved, registered in numerous jurisdictions across the world, the scope of related parties, including some of the world’s most sophisticated investors, demonstrate the cross-border, multi-jurisdictional nature of this event.

“We have been shocked at the ignorance of those who assert that FTX came to The Bahamas because they did not want to submit to regulatory scrutiny. In fact, the world is full of countries in which there is no legislative or regulatory authority over crypto, but The Bahamas is not one of them.”

Pointing out that The Bahamas had previously been ranked as having the world’s leading digital assets regulatory regime, he added: “The Securities Commission was able to move so quickly because of the strength of the legislative framework which was already in place in The Bahamas to regulate digital asset companies like FTX Digital Markets. No other jurisdiction in the world moved or could have moved this quickly in circumstances such as these.......

“The actions the Securities Commission of The Bahamas took on November 10 and 12 were to protect the clients and creditors of FTX Digital Markets. This demonstrates why the DARE Act is among the world’s leading legislative frameworks for the regulation of digital assets and related businesses.”

However, there are questions for the Securities Commission and the regulators to answer. Given that Mr Ray, who oversaw the bankruptcy and restructuring of energy trader Enron, one of the biggest corporate failures in history, said that “never in my career have I seen such a complete failure of corporate controls and such a complete absence of trustworthy financial information as occurred” with FTX, it is unclear why this was not picked up before.

For the Securities Commission would have had to conduct due diligence on FTX, co-founder Sam Bankman-Fried and his fellow principals when they first moved to The Bahamas in September 2021. Audited financial statements should have been required, along with further scrutiny of a group that Mr Ray alleges held virtually no Board meetings, had no central cash management system, did not know how many employees it had and did not keep proper books and records.

Mr Bankman-Fried was also said to have communicated “using applications that were set to auto-delete after a short period of time, and encouraged employees to do the same”. A Caribbean Financial Action Task Force (CFATF) paper, presented in September 2022, said that as at May 18, 2022, The Bahamas had three DARE Act registrants - one of which had to be FTX.

The document added that all three had undergone a “fit and proper” and “operational risk” assessment, raising questions as to what if anything was uncovered with FTX Digital Markets. One of the registrants, which was unnamed, was found to present a “medium” risk and as at August 17, 2022, was undergoing an on-site examination by the Securities Commission.

It is unclear if this is FTX, but if it was, then the crypto exchange’s offices and books were being examined by regulators just two months before it collapsed. “Three digital asset services providers have been risk rated – two categorised as low and the other as medium,” the CFATF paper said. “As of August, 2022, the [provider identified as medium, and therefore prioritised for an onsite inspection, is in the process of being examined by the Securities Commission.

“As at May 18, 2022, there were three registrants under DARE, which were all licensed and are operating in the jurisdiction since September 2021 (eight months or less). They were initially risk rated at the application stage which included a fit and proper assessment, review of operational risk as well as anti-money laundering, counter-terror financing and proliferation financing risk.

Mr Pinder, meanwhile, last night said FTX’s will not deter The Bahamas from pursuing economic diversification and the revival of its financial services industry via the digital assets niche. “We do not apologise for our ambition for Bahamians to be at the forefront of this exciting, innovative sector. The Bahamas stands behind its decision to regulate digital assets and related businesses. We stand behind the quality of the regulations that exist,” he asserted.

“We continue to invite digital assets businesses to operate from this jurisdiction. All told, we remain one of few countries in the world with such a complete and effective regulatory framework.... Like the dotcom boom and bust of the past, we believe that the turbulence currently being experienced by the digital asset sector will pass, and that there is still much potential for growth and opportunity ahead.

“In fact, I am fully confident that, as matters progress, and the activities of the FTX group are either restructured or wound down, The Bahamas will emerge, held in even higher esteem. A turbulent crypto currency period on a global basis, and the downfall of a single Bahamian company, in no way threaten a bright future for The Bahamas.”