‘Hold your breath’ as tour of prison held 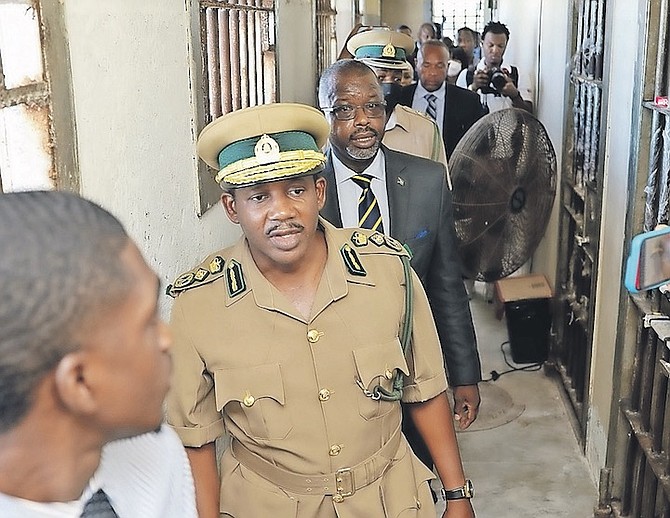 GOVERNMENT officials toured several prison wings under renovation at the Bahamas Department of Correctional Services yesterday, including a newly refurbished juvenile facility that, once completed, will be able to accommodate up to 25 minor prisoners. 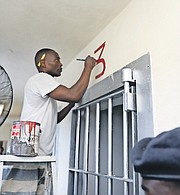 The facility, which is expected to be completed by December 16, will not only house the young inmates but also serve as a schooling centre for them.

A juvenile specialist will oversee the inmates and also be responsible for operations of the entire building, which will not be run like the main prison.

Yesterday, according to Acting Commissioner of Corrections Doan Cleare, more than $100,000 has been spent on upgrades to the juvenile building.

“The juvenile facility is a construction that came about some 40 years ago and we have done some massive remodelling,” he told reporters yesterday.

“We spent well over $100,000 on remodelling thus far. The inmates are doing the work along with officers and this facility can house comfortably, 25 inmates.

“Our juvenile population normally hovers around 14 or 15 inmates per year, this facility will be self-contained. The staffing facility will be properly trained by the American Correctional Association. You know, we’re going to have a juvenile psychiatrist specialist on board to be a scientist in this facility. So, this would be a school for juveniles.”

It was one of several facilities under renovation that was toured by senior officials, including National Security Minister Wayne Munroe and members of the media yesterday.

The purpose of the visit was to see the work done so far to improve conditions at the correctional facility following the American Correctional Association Assessment’s report that was conducted last month.

Other sites visited by the delegation included the Remand Centre at BDCS.

During a tour of the facility, this newspaper got a glimpse of the current prison cells and the ones undergoing repair that includes freshly painted walls and new beds.

This newspaper saw as many as five or more men cramped in old, overcrowded cells. There was also a strong scent emanating from the cell blocks, with officials warning reporters “to hold their breaths” before the site’s visit.

Prison officials have said that up to eight people can be housed in the small cells.

“It’s like night and day,” Mr Cleare said of the old and newly renovated cells.

As for renovation costs in the remand centre, officials said nearly $80,000 has been spent on critical upgrades on the facility to date.

“We have spent close to about $80,000 thus far but the major works to be done to the medium facility will be the plumbing, you know, we are estimating that that should cost over a million dollars,” Mr Cleare added.

“Because the facility right now, we currently have a water issue, because you know, the inmates were putting fire down into the toilets and it destroyed the pipes in the cells. So for us to get the water system back on inside there now, we have to retrofit the entire bottom floor and that is you know, correctional toilets is different from ordinary toilets. I’m hearing from the master plumber it’s $2,000 per toilet you know.”

Asked why inmates were putting fire in the toilets, the acting commissioner told reporters: “When you have inmates smoking cigarettes or any illegal contraband and officers are doing their tour, they would’ve taken that lighted contraband and just drop it into the toilet top and it goes to the pipes.”

Following a tour of the prison cells, Mr Cleare then led media to the remand centre’s dining facility that was also under renovation.

“We’re going to outfit the walls with ...so the inmates can talk to their families. Now, as you know, the government is moving towards the concept of ‘cook and chill’ so the food will be brought to the facility and we will distribute the food and they will have tables in here fully air conditioned where you can eat inside here and go back to their cells.”

He said the dining hall will be able to host 30 inmates at one time and added that officials also plan to open a pharmacy in the centre over the next two weeks.

When asked for the total costs of the renovation projects at BDCS, Mr Cleare was unable to say yesterday.

“It’s ongoing,” he added. “You see what happened is this because we just got the report and we are now going through the report from the American Correctional Association and as you know, myself in the ministry knew firsthand that it would be an expensive exercise for us to undertake.

“But again, it must be done. So, we took it upon ourselves here at the prison with the inmates’ labour and with staff to commence the renovations without assistance from the central government thus far.

“But now we are reaching a stage whereby now we now have to tap into the capital budget to go further because you know, you’re now getting into the expensive part now, which is the plumbing and the lighting,” he said.