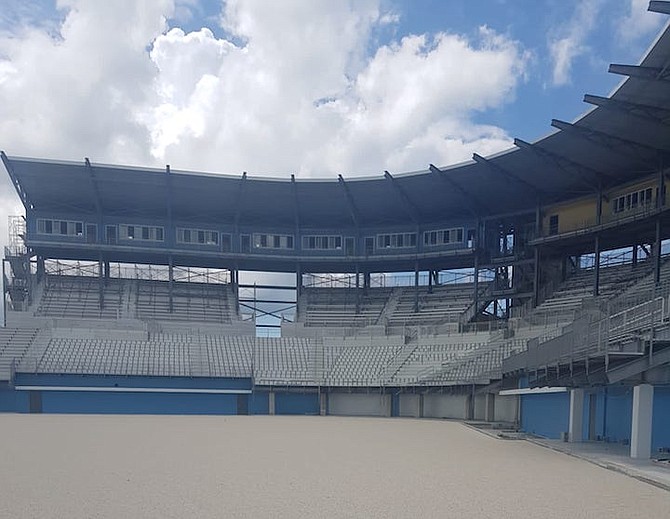 A VIEW of the new Andre Rodgers Baseball Stadium over the weekend.

ARCHITECT Mike Foster gives BBA and COCABE executives a tour of the new Andre Rodgers Baseball Stadium over the weekend.

With the assurance that the new Andre Rodgers Baseball Stadium will be completed by November, the Bahamas Baseball Association is moving full steam ahead with the hosting of the fourth Caribbean Cup.

Scheduled for December 4-11, the Caribbean Cup will feature teams from the US Virgin Islands, Haiti, Puerto Rico, defending champions Curacao, Colombia, Aruba, Peru and Cuba, all vying for a spot at the Central American and Caribbean Games, scheduled for next year in El Salvador.

Cuba, by the way, has already qualified for the games and so the remaining teams will be joining them either by winning the tournament if Cuba is not successful or, if they do, by being the runners-up.

In preparation for the tournament, the BBA and the Bahamas Government are working feverishly on having the new stadium completed.

Architect and project manager Mike Foster, before taking the media and the COCABE executives on a tour of the facilities, assured everyone that it will be ready in time for the tournament.

The stadium, according to Foster, will have a price tag of $55 million when completed, but everybody will love the synthetic surface that will be laid down this month, while the remaining cosmetic and infrastructural work is done.

Foster said at present, the stadium lights also have to be installed, along with the LED scoreboard, the corporate boxes and the concession stands will be completed, while the pond and the roads around the stadium are being done simultaneously.

Bowleg, before leaving to attend the funeral services of the late sprinter Shavez Hart in Abaco, said with the majority of players coming from the Great Britain team that recently qualified for the World Cup, this will be the first step towards the Bahamas having its own team assembled for the international competition.

“This is the beginning of the road for us qualifying for a higher level tournament,” said Bowleg, as the Bahamas Basketball Federation is in the process of doing so in the Americas region.

“I want to thank the organisers, along with the president and his assistants and COCABE for being here and hosting this event at the end of the year.

“Baseball is on the move. This is just the beginning of what is to come,” Bowleg said. “This is one of those initiatives that go with the opening of the new stadium, but we look forward to many more events to come in the future.”

Sweeting, the secretary general of the BBA, said they are delighted to host the event, which is an historic venture for the Bahamas, but one that they hope to take advantage of by producing one of the best teams ever assembled to represent the island nation.

However, he noted that Jasrado “Jazz” Chisholm and Lucius Fox will both be in attendance, but will not be able to participate for the Bahamas in the qualifier because they are on Major League 40-man rosters.

Should the Bahamas qualify, Sweeting said they will then be eligible to compete for the Bahamas at the CAC Games.

“We will have all of our other minor league players on the team,” said Sweeting, who noted that the coaching staff will be announced very shortly.

“We are going to be very competitive and we’re looking forward to showcasing the talent that is available in what is called “the show.”

“Our expectations is that we will have a very good chance to qualify for the CAC Games. With the competition of the stadium, we will have all of our minor league players available to compete for the Bahamas because it’s their offseason.”

Sweeting noted that once the team is assembled, they will get to travel to Grand Bahama for a mini training camp as the final touches are put on the completion of the stadium.

But he noted that there probably won’t be any opportunity for the team to participate in any scrimmages before the tournament.

De Lira thanked Bowleg, whom he called his “best” friend for keeping his word on allowing the tournament to be staged in the Bahamas and the LOC, headed by Sweeting and president Rodgers for their leadership in making sure that the tournament comes off. “The Bahamas is coming up in baseball,” De Lira said.

“The tournament will give the Bahamas a chance to showcase the young players coming up.”

And Rodgers said it’s a great time for baseball in the Bahamas and the BBA is ready to push the sport to higher heights.

“There are a lot of other qualifying tournaments and we will try to push it as high as we could,” Rogers said. “The sky is the limit.”

With just one 90-foot international baseball diamond available in the country, Sweeting said they have to limit the amount of teams participating in the tournament.

The visiting teams will use Super Club Breezes as the Games Village.

Once the tournament is completed, Sweeting said there are plans to reintroduce night league baseball and also to introduce a professional baseball league for the Bahamas.