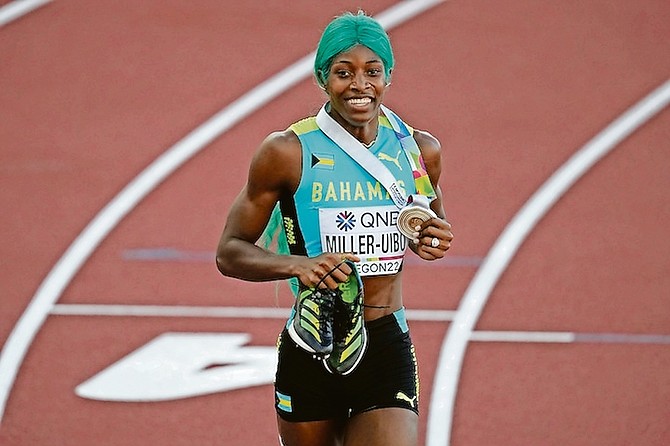 SHAUNAE Miller-Uibo after winning the gold medal at the World Athletics Championships in Oregon earlier this year.

A triple crown at the World Athletics’ Indoor and Outdoor Championships and the North American, Central American and Caribbean (NACAC) Championships has landed Bahamian multiple national record holder Shaunae Miller-Uibo back in the running for the 2022 Women’s World Athlete of the Year.

Miller-Uibo was confirmed as one of ten nominees announced on Tuesday by an international panel of athletics experts, comprising representatives from all six continental areas of World Athletics.

For the 28-year-old Miller-Uibo, it was a culmination of events this season that she had either never competed in before or had previously fell short of winning that she was now able to post on her resumé.

She returned to the World Indoor Championships for some unfinished business when she claimed her first gold medal in the 400m in 50.31 seconds in Belgrade, Serbia on March 19 to improve on the bronze she achieved in her initial appearance in 2014 in Sopot, Poland.

She accomplished another first at the first World Championships to be held in the United States in Eugene, Oregon on July 22 to snatch her first gold in 49.11 – adding to a pair of silver medals and a fourth place in the 400 and a bronze and fourth in the 200 in four previous championships from 2013.

And to top off her year, Miller-Uibo came home, albeit in Grand Bahama, for her successful debut at the North American, Central American and Caribbean Championships (NACAC) with a meet record breaking performance of 49.40 on August 20.

The other nominees for 2022 Women’s World Athlete of the Year are:

Shelly-Ann Fraser-Pryce, Jamaica’s world 100m champion, claiming a fifth gold medal in the event as well as taking the Diamond League 100m champion and running a world-leading 10.62 among her record seven sub-10.70 100m races of the season.

Shericka Jackson, Jamaica’s dual world and Diamond League 200m champion, who ran a world-leading 21.45 to move to second on the world all-time list.

Voting for the World Athletes of the Year closes at midnight on Monday 31 October. At the conclusion of the voting process, five women and five men finalists will be announced by World Athletics.

The winners will be revealed on World Athletics’ social media platforms in early December.

Further information about the World Athletics Awards 2022 will be announced in the coming weeks.