The last words 22-year-old victim said: ‘MOMMY - I GOT SHOT’ 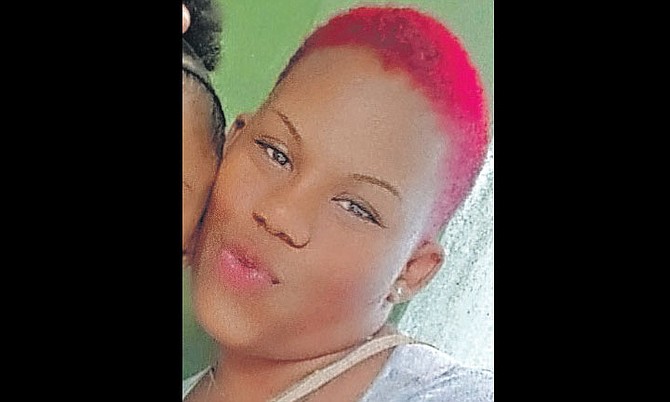 Tadasha Sears, who had a four-year-old daughter. She died after being shot on Friday night.

THE distraught mother of a 22-year-old woman who was fatally shot outside an apartment complex at Red Land Acres has recalled her daughter’s final words.

“‘Mommy, I got shot’,” Natanya Greene said of her daughter Tadasha Sears who she believes was an unintended target of rival gangs.

Sears, according to Ms Greene, was sitting on the porch on Friday night when shots rang out. She ran inside, realising she had been shot.

“Preliminary reports reveal that the victim was standing outside the complex when she was approached and subsequently shot multiple times by a male who exited a dark coloured Japanese vehicle,” police explained. At the time, police were uncertain of the circumstances surrounding this incident.

Yesterday, Ms Greene was tearful as she spoke of her daughter’s final moments. She left behind a four-year-old daughter and was planning to celebrate her 23rd birthday on October 26.

“She fell right there,” Ms Greene told The Tribune. “She said ‘Mommy, I got shot’. I went on the house phone. I dialled emergency contact. I said baby you’re gonna be okay. She said ‘okay mommy’.”

“A shot in her leg was visible. Because she was wearing a black dress, I did not see the rest of (the) bullet that had gone in her stomach. Those were her last words - ‘mummy I got shot’.”

She said the deceased had no problems with people and believed the matter was gang related. Ms Greene pointed to a group of individuals who are rivals.

“This avenue right here is a target against (the) avenue down there. There’s a set of boys who are down there based in Pinewood. They have rival with boys that be up here on this hill,” she said.

“This is an open yard. I can’t tell people don’t come in the yard. When I’m in my room, I don’t know who is be out here. I don’t know what people be in this yard from all over.”

“So they came and when they came they didn’t see no males. So, they just walk up and open fire on her.”

Police reported the victim was believed to be a Jamaican national. The deceased came to The Bahamas in July 2013, her mother said.

However, her mother sent her back home to further her education in Jamaica.

“She went to study as a nail technician. She came back over.”

Ms Greene has been living in the apartment for eight years.

Asked if she had security issues, the mother answered: “Never. No matter what happened up here or wherever because violence is everywhere, but I never one day imagine.”

Yet, she admitted to the effect a previous shooting incident had on her 19-year-old son who is now in Jamaica.

“After one of his school friends got shot right there, I sent him home because I see he was still emotional about it. And I can’t be up to watch him every night to say he ain’t coming out of this house. I don’t know what’s going through his mind space.”

Meanwhile, Bishop Simeon Hall has called for the United States to assist The Bahamas with the number of illegal guns on the streets.

He said: “The widespread presence of illegal guns in our country is at the core of the bloodshed on our streets. These guns are not manufactured in The Bahamas. We, therefore, fully endorse and echo the recent calls of Prime Minister (Philip “Brave”)Davis for the United States of America – where these guns are made – to do more to stop the illegal export and trafficking of guns into our Bahama land.

“Periodically, when there is an uptick in crime-related incidents the US issues security and travel alerts warning their citizens on traveling to our country. These alerts are ineffective at best - some would say disingenuous - if not accompanied by renewed efforts and resolutions to assist in blocking and removing the American guns from our streets.

“The recent uptick in violent crime needs an all-hands-on-deck approach at the domestic, regional, and international levels. Who has a bigger hand than the United States?”

• The caption of the photo has been corrected.

You caption under the picture says , Natanya green got shot. You article says she is the mother of the victim. Tadasha sears is the daughter whom got shot.

Its, heartbreaking to have to hear another innocent bystander brutally murder by these selfish sloths. They are the Bane of the Bahamian people and are the greatest of traitors and anti-patriots (apart from some of these politicians) to live in this country.

However, america needs to do more to stop their gun from leaving the country, I fully agree with the bishop statements. Guns can linger about yes but how are these weapons receiving a constant flow of ammo

What does cruel Davis and his cohorts care.

The lawless element of our society has no regard for life or property. In New Providence , we are left with depending on the Government to protect the citizens and their property. The Government has failed us.

In the meantime, most of us are unable to legally protect ourselves and our property. Shameful.