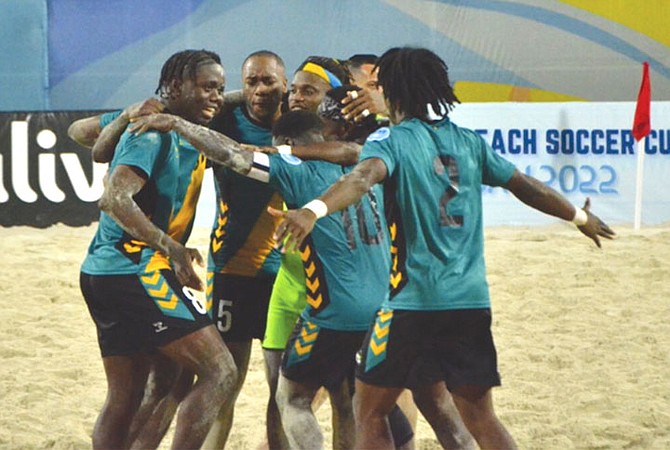 TEAM Bahamas completed an undefeated run to claim the 2022 Bahamas Beach Soccer Cup last night with a thrilling 3-1 win over Colombia in the tournament finale.

International beach soccer returned to the national stadium and the senior men’s national team made history before an enthusiastic home crowd eager to see the sport once again played at the highest level.

The Bahamas completed an undefeated run to claim the 2022 Bahamas Beach Soccer Cup last night with a thrilling 3-1 win over Colombia in the tournament finale.

They topped the table with nine points and a goal differential of seven - 16 scored and nine against.

In a slow-paced first period, attacking predominantly with Butler, The Bahamas fell behind on Colombia’s lone goal of the night when Eduardo Edu scored at the 5:35 mark.

After a scoreless second, St Fleur moved from defender to forward, and for the second time this tournament, it sparked a Bahamas come-from-behind win.

Brandon Adderley delivered a strike to give the home team its first goal and tie the game 1-1 with 7:34 left to play in regulation.

The game appeared headed for extra time when Butler was awarded a penalty kick with 30 seconds left in the match.

After his shot was blocked, Wood Julmis headed in the rebound to give The Bahamas the go ahead score, 2-1 with just over 27 seconds left to play.

“When the ball was bouncing around I think it was just a natural reaction to me, dive, put my head on it and get the goal. I’m always eager to try and fight for the goal, score for my country,” he said.

“I had to celebrate, I had to enjoy every single moment, it was a special moment for me.”

Julmis said the moment was amplified by the raucous crowd in attendance that joined in on his goal celebration. “I’ve been on the national team for three years now, we’ve always played on the road, never played in a tournament at home, this is amazing. To play here in front of our fans is amazing and the support our fans gave us is extraordinary.”

Gary Joseph converted his penalty kick with 13 seconds left for the final score.

Head coach Gavin Christie said despite the methodical pace of the first two periods, his message to his side during the match was one of patience.

“I told the guys, you have to be patient with this game. In beach soccer, one or two goals doesn’t mean anything. I told the guys to stick with the gameplan and our time will come - thankfully that came in the third period when we were able to score those goals and take this victory,” he said.

“For The Bahamas to win all three games against tough competition shows that we are ready for the next step in this sport in The Bahamas.”

St Fleur missed on several shot opportunities in the finale but was pleased with the resilience his team showed over the course of the weekend.

“It was a great tournament, every game we played we started off slow and we recovered in the end. This match showed who had it more and who wanted to win the game and in the end, it was us,” he said.

“It’s a great pleasure to play in front of our fans. They gave us the vibes, we feed off of their energy so we hope for them to continue to support us and I want to thank them for coming out.”

Both player and coach see this tournament win as the beginning of a trek toward the goal of qualifying for the 2023 Beach Soccer World Cup.

“This is the start for the World Cup, for the Qualifiers next year,” St Fleur said. “We want to encourage everyone to come out, train with us, and try to make the team. We are trying to build a young team with veteran leadership.”

Christie added: “The Bahamas has really been wanting beach soccer back, now we have it and we’ve brought it back in grand style. The next thing on the list is World Cup qualifying and this tournament was really the kickoff for our programme to get started toward that goal in 2023.”

The men entered the final day as the highest goal scoring team of the tournament.

The Bahamas concluded night one with a furious four-goal rally in the third period to clinch a come from behind win.

The visitors took an early 2-0 lead in the first period on goals from Coker and Riley.

Julmis ended the high scoring period with a goal for The Bahamas to make the score 3-2 at the end of one. Jean Francois’ goal was the only score of the second period and the teams took a 3-3 score into the final period.

The visitors struck first on the first of two goals from Roger at the 7:54 mark in the first period but The Bahamas took control on goals from Joseph (3:45’) and Butler (2:42’) less than a minute apart.

The second period featured four goals as The Bahamas maintained their advantage.

Adderley scored at 9:13” to give The Bahamas a 3-1 lead. Greivin scored the first of his two goals in the period to bring Costa Rica within one (8:54’), only to have the home team regain their two-goal advantage just minutes later on a Kyle Williams strike at the 8:49’ mark. In the final period, Roger scored his second goal of the game at 8:33’ but The Bahamas closed out scoring with goals from St Fleur (7:25’) and Julmis (5:14’)

The women’s national team finished winless after losses to Turks and Caicos and Trinidad and Tobago.

On night one, The Bahamas women fell to Turks and Caicos 3-2.

The Bahamas got goals from Janeka Edey and Angel Williams.

Turks and Caicos lost their opening match to Trinidad and Tobago, but took the lead against their hosts on Saturday night.

Last night, The Bahamas came up on the wrong end of the highest scoring match of the tournament, an 11-6 loss to Trinidad and Tobago.

Joan Cuscó, president of Beach Soccer Worldwide, stated that “it is great to return to the Bahamas after our last event in Nassau in 2018.

“We have so many good memories of all the tournaments we had in the Bahamas, and to play in a World Cup stadium is an assurance of a quality event.”

For Anton Sealey, president of the Bahamas Football Association, “this tournament is an opportunity to see some of the best talent competing in Nassau, in the best beach soccer facilities in the region, confirming the successful bet placed on the 2017 World Cup”.