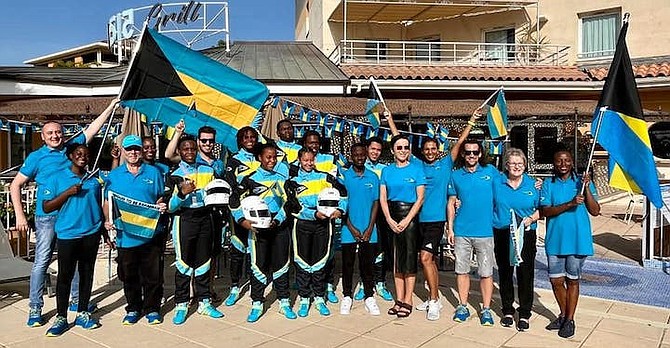 Team Bahamas is poised to make history for the local development of the sport when they compete in the 2022 International Automobile Federation (FIA) Motorsport Games.

The seven-member team of Dominick Robinson, Jashai Burrows, Caden Burbridge, Chris Bain, Maria Scott, Gisele Liriano and Romando Hudson are expected to compete against drivers from 72 countries at the Circuit Paul Ricard in Marseille, France. Hudson, Bain, Burrows and Liriano are scheduled to compete in the four-hour Karting Endurance race.

Teams must complete three laps – one test and two timed runs – to establish an overall leaderboard.

The fastest teams will then progress to the knockout phase of head-to-head time trials, culminating in the final to determine the medal winners.

The Karting Slalom competition begins on Friday and concludes with the medal rounds on Sunday.

The multi-discipline FIA Motorsports games return to competition for the first time since 2019 due to the COVID-19 pandemic. The Karting segment of the event has grown from 30 contested events in 2019 to 57 this year. Karting was also featured as a demonstration sport at the 2018 Youth Olympics in Buenos Aires, Argentina.

In total, this year’s event will feature 10 new disciplines, and The Bahamas will be one of 29 first time countries participating.

At the opening ceremony, Robert Reid, FIA Deputy President for Sport, said the growth of the sport and its diversity should be celebrated.

“[At the FIA] we’re first and foremost a federation of member clubs. We stood on a manifesto of regional empowerment and [national] sports clubs are very important to us. To see so many of them here, not just European clubs represented but clubs from all over the world is great. We also stood on a commitment to double motorsport participation, so the grassroots are very important to us,” he said. “Motorsport is expensive at the top and it doesn’t have to be at the bottom end, so it’s important to celebrate that at events like this one. The fact that nations have come even with one competitor is brilliant. Well done to everybody who’s come along, to all the countries for putting the teams in, and to the competitors for being here. You couldn’t have a better display of equality, diversity and inclusivity than we’ve seen tonight.”