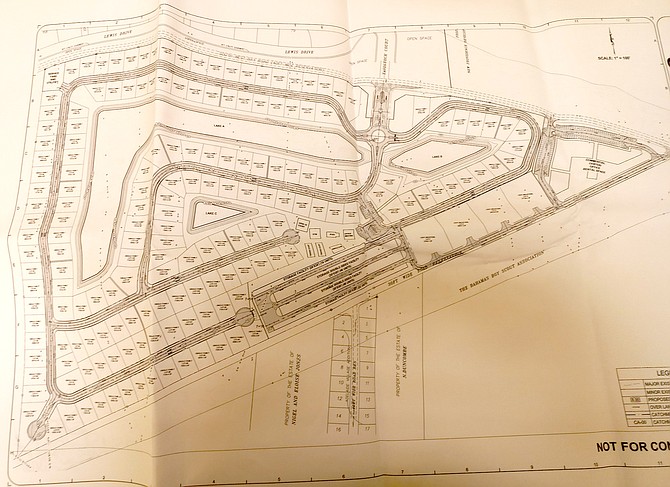 A plan of the residential and light industrial development.

A Bahamian businessman is teaming with Albany’s developer and two UK investors for a $62.788m “mixed-use” residential and light industrial development in south-west New Providence that will create up to 300 full-time jobs.

Robert Myers, who is the Organisation for Responsible Governance’s (ORG) principal, has partnered with Lyford Cay-based billionaire Joe Lewis and his fellow Albany investors to help solve what he yesterday told Tribune Business is “a desperate need” for quality middle income housing in that part of the island.

Adelaide Pines will feature “about 180” single family lots, together with 19-25 lots for commercial and light industry in a bid to attract businesses to the area and provide employment for residents. Located on the southern side of Adelaide Road, opposite the eastern entrance to the high-end Albany development, the project has already obtained its Certificate of Environmental Clearance (CEC) and now just awaits the relevant planning approvals.

Speaking ahead of the public consultation scheduled for September 21, Mr Myers told this newspaper that rejecting the proposal would “send a terrible message.. because we’ve done everything we should and then some” in developing a sustainable community that is “very environmentally sensitive”.

And he disclosed that the developers are still assessing costs and financial numbers to determine whether it “make sense” to proceed with the present concept at this time due to the global inflationary pressures that have sent construction and building materials costs soaring.

Disclosing that pricing for the lots and homes is still being worked out, Mr Myers said costs had increased “significantly” since the $68m total investment figure was calculated in January 2022. “The problem is there’s such inflation on materials,” he explained. “Frankly, we’re hoping it makes sense because we’re fighting such inflation and supply chain problems. We’re hoping that the market cools off. Pricing is starting to come in, and it’s very high.

“Everything is affected. The cost of fuel, the cost of labour, the cost of materials. Everything has gone up. We’re hopeful that it makes sense once we get all the numbers. Those [the $68m] are early estimates prior to the inflation, which since January has been significant.... We had a budget there, but have been surprised already by some of the numbers coming back.

“I would tell you that it’s very challenging to get those numbers to work because of inflation, the global rise in interest rates, and fuel prices etc. The need is there. The problem with low and middle cost housing is the need is there, but it is just too damn expensive. That’s what we’re trying to figure out. I’m optimistic but concerned.

Mr Myers said Adelaide Pines may ultimately see “a couple hundred million” invested when homes built by residential real estate buyers are factored into the total. He added that the developers have yet to engage the utility providers, such as Bahamas Power & Light (BPL), Water & Sewerage and Cable Bahamas, to determine how much it will cost to connect and service the community as the necessary planning approvals are required first.

The Davis administration’s National Economic Council (NEC), which is really the Cabinet or a Cabinet sub-committee, approved Adelaide Pines’ acquisition of the 64-acre parcel that will comprise the development on February 7, 2022. The necessary Investments Board permit, as required by the International Persons Landholding Act, was issued for the $4.809m purchase of the site from Terry White, the US businessman who owns New Providence Development Company.

The project was also given the go-ahead subject to meeting all the environmental and planning permitting requirements. An NEC paper, dated January 13, 2022, reveals that Mr Myers and Albany’s corporate developer, Park Ridge Securities, are both minority investors in Adelaide Pines with equity stakes of 25 percent and 20 percent, respectively.

The 55 percent majority interest was held by NME Investments, a company beneficially owned by two UK nationals, Mark and Eric Huffman. Mark was identified as a doctor, while Eric is chief executive of a London-based financial services provider, Millennium Global Treasury Services. Park Ridge, which was identified as being beneficially owned by Mr Lewis, world-renowned golfer Tiger Woods, and Albany principal, Christopher Anand, holds its interest via Horizons Capital.

Describing Adelaide Pines as a gated community that will provide parks and other amenities, the NEC paper added: “Adjoining the residential community to the south-east will be 19-25 commercial and light industrial lots that will encourage businesses to establish themselves in the area, thus providing employment opportunities for those living in the community and the broader community.

“East of the mini-storage facility will be a retail and office park that will lease units to third parties on the lower floor for restaurants, shops and service businesses in a courtyard design and office space on the second floor. It is proposed that the project be built out in phases, with the commercial and light industrial phase starting as soon as planning permission is obtained, and all other phases will run concurrently and/or follow the commercial development.”

Mr Myers was named as the partner who will manage the construction, and the NEC paper added: “It is therefore anticipated that a full Bahamian workforce comprising some 150-200 Bahamians be employed during the construction phase. The first year of operations will generate about 30 jobs, and that will rise steadily through the completion of the various phases of development to about 250-300 permanent jobs within the complex. No work permits are required.”

“It is the intention of the developers to provide the start-up capital for phase one and then continue to roll profits from the sale of each phase into the next phase, thus reducing the total capital required per phase,” the Bahamas Investment Authority (BIA) briefing for the NEC said.

“The construction of this development will have a significant positive economic impact to the national economy through its local and foreign direct investment inflows that will result in considerable government Customs duties, VAT revenues and US dollar inflows.

“The ongoing impact to the national economy will be felt in terms of ongoing construction of single family homes...and commercial businesses whose impacts are not presented or budgeted above. These additional third party endeavours will all improve employment and contribute Customs duties, VAT, utility use, NIB contributions, property taxes, Business Licence fees, maintenance service fees and other taxes to the national economy.’

Financial references had been provided on the developers’ behalf by Julius Baer, while a due diligence check on the Huffmans by the BIA had turned up nothing untoward. A document signed by the Cabinet secretary confirmed that the NEC considered the Adelaide Pines project at its January 25, 2022, meeting with the project introduced by Phylicia Woods-Hanna, director of investments, and supported by a paper from Chester Cooper, deputy prime minister.

Approval was granted, but not without concerns being raised. “Another concern was raised regarding the menial jobs offered to Bahamians in the proposed development,” the note on the meeting said. “It was pointed out that the Bahamas Investment Authority is in preliminary discussions with the departments of Immigration and Labour in the creation of skill sets databases both domestically and internationally.”

The note also revealed that unspecified “concerns” were aired “relative to the interest of the Bahamian shareholder in the project”, meaning Mr Myers, although these were not detailed. “It was noted that Council will require a full understanding of the economic impact of the project on the local economy. Council requested that the Bahamas Investment Authority complete the information and advise of its findings,” the note said.

If you live in a country where you are encouraged to drive everywhere and have poor public transit expect to be poorer by couple $1000's of dollars every year.

That also doesn't account for an a car accident expenses nor the external affects of high car use on others. Air Pollution, Noise, and Road safety risk.

It is a nice proposal they are doing here but we don't need more Gated development far out west, we need more downtown mixed use development with good access to reliable public transit. I mean look at the buildings on Bay and Shirley St. Loads of them are empty either completely or on the upper levels unused.

It is basic good city planning.

Pretty soon there won't be a tree standing on small New Providence Island which is already grossly over-populated and over-developed. NP is destined to become an "island slum" much sooner than anyone could have imagined.

Billionaire Joe Lewis is obviously fearful of a corrupt developer like Franky Wilson a/k/a Snake developing one of his typically shabby low-cost housing projects adjacent to the 'high-end' Albany development. And Robert Myers is seeking to capitalise on Joe Lewis's fear.

But will Bahamians be able to afford it? It has become nearly impossible to become a homeowner as a young Bahamian and projects like this honestly don't help the actual economic problem, which is the disappearance of the middle class. The government needs to be pushing projects that will provide affordable equity opportunities for Bahamians, not continue to line the pockets of the 1% and price Bahamians out of places to live.