FRONT PORCH: Managing a crisis while building the future 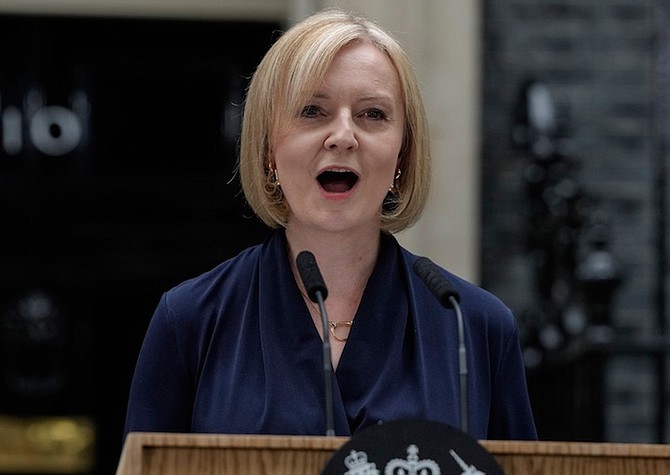 “Now, we live an epochal period. The historic challenge for leaders is to manage the crisis while building the future. Failure could set the world on fire.”

IN an April 2020 Wall Street Journal article entitled, “The Coronavirus Pandemic Will Forever Alter the World Order”, Henry Kissinger advised world leaders of the crises the pandemic might unleash and the urgent need to meet the complex of challenges with clarity and imagination.

His commentary recalls an adage credited to Winston Churchill in the mid-1940s during some of the bleakest days of World War II: “Never let a good crisis go to waste.”

When the 47-year-old Liz Truss took the reins of power and entered through the front black-lacquered door of 10 Downing Street for the first time yesterday as the new British Prime Minister, a whirlwind of crises descended on her.

With the ongoing war in Ukraine and in the aftermath of the worst phases of the ongoing COVID- 19 pandemic, the United Kingdom is beset by a maelstrom of interlocking crises, made even more complex by Brexit and long-term structural economic issues bedeviling Britain. This includes national productivity.

Her predecessor, Boris Johnson, helped secure an impressive general election victory for the Tories, especially after Jeremy Corbyn drove Labour too far left. The pandemic and the war in Ukraine provided Johnson the opportunity to demonstrate his ability to lead during unprecedented modern crises.

There were some sluggishness and missteps in the early days of the pandemic. Still, Johnson successfully led the country in the development of a vaccine, in the roll-out of vaccines and in other aspects of the pandemic. He provided stellar and consistent leadership in confronting the Russian war on Ukraine.

Though he had outsized skills that helped him to meet these challenges, Johnson also had outsized characteristics and pathologies, including his pathological lying, that eventually felled him despite having two more years of an electoral mandate.

Prime Minister Truss faces a number of crises that will test her mettle. The immediate crisis has to do with crippling energy costs for consumers and businesses, with Fall on the horizon and winter fast approaching. Britain is also facing double digit inflation that continues to mount, with no immediate end in sight.

In an interview with veteran broadcaster and political analysts Andrew Marr, former Conservative Leader, Sir Iain Duncan Smith, warned the fractious and disunited Tories of the moment and of the looming political crisis for the party, which has been in office since 2010.

Sir Iain noted that Prime Minister Truss was facing “almost the biggest set of troubles that any government has faced”. He further observed: “It reminds me a bit of Mrs Thatcher, but Mrs Thatcher had five years.”

He advised the party, which has deep policy divisions, that it needed desperately to unite ahead of general elections in two years. His stark warning: “In other words, you’re staring into the grave.”

Writing in the UK Guardian, Simon Jenkins offered: “The energy crisis could do for Truss what the COVID lockdown did for Johnson. The nation will be hanging on her every word. Short-term generosity with public money seldom did a prime minister any harm, and will offer her a ready platform to parade her qualities of leadership.

“Provided she pursues her past habit of adjusting her ideas to the prevailing wind, she may just come through the next year with her standing enhanced. The next election is a different matter.”

Labour under Sir Keir Starmer will use the complex of crises to upend her premiership and the Tories, with many voters seemingly wanting a change in government.

But Labour has its own challenges and does not enjoy a commanding lead. Many voters, including older voters, who reliably go to the polls in great numbers, are still uncertain about a Labour party that lost tremendous appeal during the disastrous Jeremy Corbyn years.

Observers should be careful in writing Truss off too easily, though the policy and political mountains she has to climb include treacherous terrain and no easy guideposts.

During the two-month leadership race there were glowing flaws, inconsistencies and gaffes by Truss, who never won a majority of the votes by her parliamentary caucus. She did make some corrections and emerged victorious.

Her brief now? In Kissinger’s instruction, it is: How to manage the crises while attempting to craft a better future. There are perennial lessons for a leader confronted by historic challenges, which may be posed in a series of questions.

But first, a general predisposition. In confronting crises, the timid fail! A transformative leader in times of crisis needs to have boldness of character and vision. One cannot stop a coming tide with a thimble or a cup. Those who think small and narrowly, usually fail.

What are some master questions for a leader in times of crisis?

Have you correctly read the moment? What are your core plans? Who are your advisers and talent? What is your policy planning and political process? What is your communications strategy? What are the characteristics you bring to the moment: intellect and insight, experience, resilience, etc?

Joe Biden came to office as the pandemic continued to rage and with the US and the global economy facing an eye-watering set of economic challenges.

He had to govern in the aftermath of an attempted coup just weeks before his inauguration and amidst the continuing fallout from the killing of George Floyd. He has had to lead the West in confronting Russia over the war with Ukraine.

Biden was decisively helped by a Democratic majority in Congress, which he knew might only last for two years. Biden understood the moment. He had a number of plans and ideas. He appointed a good cabinet and excellent White House advisors.

A practitioner and student of history, he understood how Washington and the Congress work, paying attention to policy and political detail. Though his communications have not always been the best, he kept his eyes on his core goals.

When the chattering classes and pundits were relentlessly spinning a narrative of failure, he was cutting policy deals where he could, and cajoling, enticing and jawboning certain senators to help pass historic legislation.

Biden and the Democrats seized on the Supreme Court’s decision on Roe v. Wade to significant political effect.

In Philadelphia last week, he baited Donald Trump, while trying to lure independents and to rally his base. Writing this week in The Atlantic, David Frum, who served as a speechwriter for George W Bush, observed: “Biden came to Philadelphia to deliver a wound to Trump’s boundless yet fragile ego. Trump obliged with a monstrously self-involved meltdown 48 hours later. And now his party has nowhere to hide. Trump has overwritten his name on every Republican line of every ballot in 2022.

“Biden dangled the bait. Trump took it — and put his whole party on the hook with him. Republican leaders are left with little choice but to pretend to like it.”

And the 79-year-old experienced politician, who has weathered many storms during his life, has demonstrated a suite of characteristics as he managed a barrage of crises while attempting to build a better future.

He has evinced extraordinary focus, pragmatism, steeliness, resilience and an ability to handle multiple crises simultaneously. His, like others, has not been a perfect government. But he has demonstrated generally good governance.

The Democrats are likely to lose the House of Representatives, as is typical during midterm elections. But a revived party may hold on to the Senate, especially because of extremist candidates running for the Republicans in several states.

What has Biden achieved in two years, turning crises into long-term achievements? He managed the COVID-19 crisis, ensuring many more Americans had vaccines. He passed a far-reaching economic recovery plan that stabilised the US economy, while lowering child poverty rates and helping to reduce unemployment. Biden got passed and signed historic climate change and infrastructure legislation that many had been yearning for.

The Inflation Reduction Act, the American Rescue Plan and his infrastructure package are going to help generations of Americans. He also capped and reduced certain lifesaving prescription drug costs.

Thomas Oakes observed in the Chicago Sun Times that: “In the first 19 months of his presidency, President Joe Biden’s accomplishments echo themes and priorities from the major initiatives of Presidents Franklin D Roosevelt, Dwight D Eisenhower, Lyndon B Johnson and Ronald Reagan.”

Biden has disappointed some. He has made mistakes. Some of the results are mixed. But he has also succeeded in ways many thought not possible, mostly because he turned the crises with which he was confronted into tangible change for a better future for millions for generations to come.