STATESIDE: ‘A snapshot of horror’ – The shocking knife attack on author Salman Rushdie 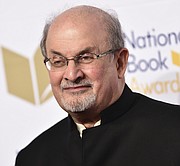 “IT was totally surreal,” Andy said. “There is absolutely nothing that prepares you for something like that. It was as though time stopped, frozen in a snapshot of horror. I was sitting toward the top of the amphitheater bowl, so I was nearly 100 yards away from the stage. At first, I was just dazed, witnessing what was unfolding on stage. So was everyone around me.”

“I was watching on my computer via a live-stream,” his wife Chris said. “I thought at first that it was some kind of stunt. My mind simply refused to accept and process that someone’s life was actually at risk in this bizarre situation that was unfolding in real time. I guess I’m still kind of in shock over it all.”

“I was late for the event,” Laura recalled, “so I hopped on my bike to get over to the venue and not miss too much of the speech. But then the strangest thing happened. My watch told me I had missed the introduction and that the lecture was about to begin. But crowds were streaming along the street, away from the venue. And no one was talking, or on their phone, or doing anything, really. They were just walking along, marching, almost like zombies. I didn’t see any emotion on anyone’s face. Then I found out what had happened.”

What happened, about a month ago on the stage at a venue in Western New York State where Franklyn Roosevelt and Bill Clinton have spoken, was the savage and shocking knife attack on India-born author Salman Rushdie, 75, in front of about 2,500 stunned onlookers as Rushdie was preparing to deliver a speech. Rushdie is an author and for decades a public personality both in full view and in fearful hiding due to a religious death warrant imposed on him by the theocratic leader of Iran.

THE AFTERMATH of the attack on Salman Rushdie at the Chautauqua Institution, in Chautauqua, New York. (AP Photo)

The fatwa was issued after the 1988 publication of Rushdie’s fourth book, Satanic Verses, which was regarded by many Muslims as sacrilegious in its depiction of the prophet Mohammed. Once married to one of the world’s most beautiful and photographed women, Rushdie has lived an often-glamorous life as the result of his fame.

In fact, Rushdie’s distinctly unprepossessing outward appearance has proven to be no impediment to a playboy’s lifestyle. He has, over the years, been reportedly involved with some of the world’s most beautiful women.

“It’s strange, given that I’ve been married four times, but I actually don’t think marriage is necessary,” he was quoted as saying after the fourth marriage.

“Girls like it, especially if they’ve never been married before. It’s the dress. Girls want a beautiful wedding. They don’t want a marriage. If only you could have weddings without marriages.”

In recent months, the New York Times has reported that Rushdie has eschewed the personal security that he and his sponsors had insisted upon for many years after the Iranian bounty was placed on his head. Out and about in the New York area, he had proclaimed that he was “starting to live my life as a free man again.”

On August 12, he was stabbed over a dozen times by a 25-year-old from New Jersey who subsequently revealed that he was “impressed by Iran” before pleading not guilty to an attempted murder witnessed by literally thousands of onlookers. No bail was allowed for this young zealot.

As a “free” man, Rushdie suffered grievous injuries and was lucky to survive the attack. He is likely to lose one eye, at least part of his liver, and likely other infirmities in the aftermath of his ordeal. For the record, the Iranian government denied any role in the assault on Rushdie.

“Regarding the attack on Salman Rushdie, we do not consider anyone other than (Rushdie) and his supporters worthy of blame or even condemnation,” Iranian Foreign Ministry spokesperson Nasser Kanaani said in a televised news conference three days after the incident.

Over the past month, the curtain of discreet secrecy has been drawn around Rushdie and his medical condition though according to press reports, he continues to regain strength and is clearly expected to survive his attacker’s assault, albeit with severe physical impairments.

Shortly after 10:30 a.m. on August 12, Rushdie, an associate who was preparing to conduct an interview with him, and two officials from the venue were on stage. Despite the presence in the vicinity of the amphitheater where the talk was planned of locally engaged security staff and a local policeman, there was no security presence by the entrance to the stage.

The attacker suddenly and nimbly leapt onto the stage and rushed Rushdie. In only a few seconds he was able to stab the author 15 times, including in the eye, neck and torso. Press reports later indicated that Rushdie had used his arms to defend himself, and sustained numerous serious injuries in doing so. No one else on stage was seriously injured; only one person sustained a minor cut.

During the attack, according to numerous eyewitnesses, almost everyone was simply frozen, stunned into inactivity by the sheer unexpected shock of the event unfolding before their eyes. Time stopped. Everyone in the arena has his or her own individual memories and stories for grandchildren one day, but their reactions are remarkably similar. Unforgettable. Indelible. Horrific. Traumatizing.

Traumatizing indeed. Support groups were formed within 12 hours of the attack. Therapists in the area found their voice mailboxes quickly overflowing with requests for consultations. Several people in attendance on that morning have reported that they have been suffering from nightmares that don’t reproduce the details but leave unmistakable traces of their source.

Venue directors and executives were left with difficult choices. To beef up security in a fashion sufficiently visible to act as a deterrent to further violence would, in the opinion of several, derogate from the open, welcoming nature of the venue. There was some initial hesitancy about the appropriate organizational response.

Then the governor of New York, who grew up in Western New York herself, settled the issue. Appearing at an event designed as a healing meeting ostensibly to thank the doctors, nurses, EMTs and security personnel who assisted in the aftermath of the attack, the governor revealed that she had ordered the state police to increase patrols in the area and even inside the venue.

Running for governor for the first time since stepping in for former governor Andrew Cuomo who was forced from office after several scandals broke almost simultaneously almost exactly one year ago, Kathy Hochul has solidified her hold on the Democratic party and seems poised to cruise to election in November. But as a woman and Buffalo-area native, she is bucking the winds of a male-dominated state party that almost always draws its top leaders from the metropolitan New York City area.

Hochul is taking no chances, so she turned her remarks into a political rally meant to demonstrate her tough on crime stance and opposition to hate crimes. It wasn’t artful, but she did get her message across.

In the wake of the tragedy, a community and venue remain shaken. They were at the epicenter of the global news cycle for Andy Warhol’s “15 minutes of fame.” But what now? Has the placid, open nature of the venue been forever sullied and perhaps destroyed? What is the appropriate mix of security and freedom now? How to make people feel safer, be safer, and yet no less free?

These are rapidly becoming existential questions, and not just for an isolated venue in New York State. The U.S. more generally is experiencing an epidemic of criminal and at least threatened political violence. Nearly every news cycle brings with it new reports about mass shootings all across the country. Democrats reflexively decry the pervasive, lethal effect of largely unregulated gun sales. Republicans remind us that “guns don’t kill people, people do,” and urge more law enforcement attention to those with mental disorders.

The news cycle and violence carry on, reinforcing each other.

Ah yes, Charlie Harper the Socialist Democrat bootlicker. He begins his latest "column" with a story line about Salman Rushdie; and finishes it with a mix of cheerleading for a slumping Kathy Hochul and a misleading brief on crime in the United States.

Rushdie has been the target of Iranian terrorists for years and still is. The threat is not over.

Crime in the Untied States is directly related to so called "criminal justice reform" that has been championed by liberal Socialist Democrats and their accomplices. Repeat offenders are routinely released back into the public realm by "progressive" District Attorneys. From liberal Socialist Democrat bastions in Loudoun County Virginia, to New York City, to Chicago, to Los Angeles, to San Francisco and beyond, the voters are in the process of recalling these progressives. As Governor of New York, Kathy Hochul could remove the progressive New York City District Attorney. However, she choses not to do so, even though many are pointing out his failures and calling for his removal.

Law abiding citizens in the Untied States have a Constitutional right to protect themselves, their families and their property. Exercising this right provides a level of protection that citizens employ when their government fails to do so.

Criminals and law breakers will weaponize any item to carryout their deeds. Knives, automobiles, and increasingly gang attacks by thugs on the streets of the aforementioned locations are becoming common.

On the other hand, here in Nassau we live behind barred windows and locked doors, unable to travel about freely after dark, constantly looking over our shoulders when we are out in broad daylight grocery shopping, without the means to protect ourselves, our families and our property.

The Tribune and Charlie Harper would be well served to provide the readers with a "column" on criminal activity and it's roots right here in the Bahamas.