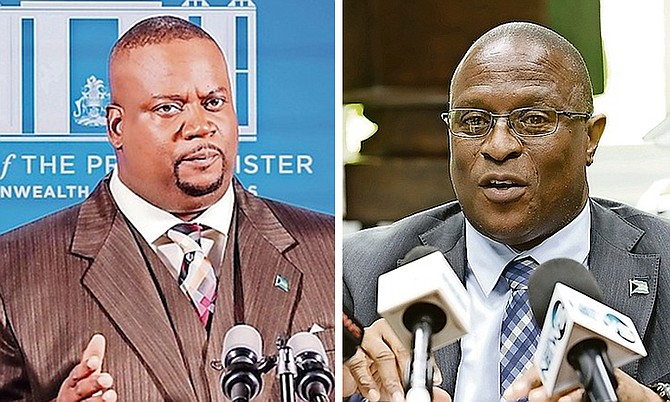 The Government and Opposition yesterday traded blows over assertions that a Cabinet minister’s brother has been replaced as acting Road Traffic controller due to the ongoing controversy over too many taxi plates being issued.

Michael Pintard, the Free National Movement (FNM) leader, yesterday urged the Davis administration to “clarify what the facts are” surrounding the replacement of Commander Bertram Bowleg by Ross Smith so that “a cloud does not hang over” the former or Jobeth Coleby-Davis, minister of transport and housing.

However, Clint Watson, the Prime Minister’s spokesman, hit back by accusing Mr Pintard and his party of “fishing for something that doesn’t exist” over the change in leadership at the Road Traffic Department. He said Mr Smith, who held the post during the last Christie administration, had been reappointed acting controller in November 2021 - two months after the general election.

Mr Watson told Tribune Business that Mr Smith had been charged, in early 2022, with setting up Road Traffic offices in various Family Islands. Due to his absence from Nassau, Commander Bowleg, brother of Mario Bowleg, minister of youth, sports and culture, was asked to temporarily sit as acting Road Traffic controller in Mr Smith’s place in Nassau until the latter’s mission was completed.

Now that it has, Mr Watson said Mr Smith has retaken the post while Commander Bowleg has returned to the Ministry of Housing and Transport, adding that it had nothing to do with taxi plates. And he dismissed as “nonsense” and “untrue” assertions by Mr Pintard, which the FNM leader repeated yesterday, that unnamed “numerous persons who work closely” with Mrs Coleby-Davis have been suspended from their duties for unknown reasons.

There is nothing to suggest that Commander Bowleg has done anything wrong. However, Mr Pintard was yesterday backed by Wesley Ferguson, the Bahamas Taxi Cab Union’s president, who told Tribune Business that the change in the Road Traffic Department’s leadership was a direct result of too many new taxi cab plates being issued.

Mr Ferguson and other drivers have previously alleged that 600-plus new plates have been issued, at least three times’ what they thought had been agreed with Mrs Coleby-Davis and the Davis administration. They argue that the result has been to over-saturate the taxi market with drivers who are not eligible or qualified to have a plate, with the consequence that industry participants are earning less because they are all competing for a pie that has not grown in size.

“Ross Smith is a gentleman. I worked with Ross Smith for many years and he’s a professional,” Mr Ferguson said. Mrs Coleby-Davis last week confirmed that Mr Smith has been installed as Road Traffic’s acting controller, but gave no explanation for this or why Mr Bowleg was replaced after spending less than a year in the post.

Mrs Coleby-Davis and officials at both the Ministry of Transport and Housing and the Road Traffic Department did not respond to Tribune Business phone calls and messages seeking comments before press time. Mr Pintard, meanwhile, said the breaching of an agreement between the Government and Mr Ferguson/taxi union over the number of new plates to be issued lies at the heart of the situation.

“There was an agreement between the minister and union leader with respect to how many plates ought to be issued,” the Opposition’s leader said. “The union would issue a certain amount of plates, and the ministry would do the same. I believe the figure was between 50 and 100; a relatively low number. They agreed on a figure somewhere between 50 and 100.”

This newspaper’s sources said the figure was closer to 200, but Mr Pintard added: “The union leader and his members, and particularly the executive members, then learned from listening to the minister [Mrs Coleby-Davis] in the House of Assembly that the number of plates released was in the vicinity of 280 or thereabouts.

“That has become problematic in several ways,” Mr Pintard added of the excess. “One is the vetting process required for someone to be a taxi driver. It requires a degree of investigation and vetting. It requires a degree of training as well, and going through the Bahama Host programme.....You have to be investigated, so that you are a fit and proper person to be transporting passengers and tourists within the jurisdiction.”

While the Davis administration had talked up the event it staged at Loyola Hall on Gladstone Road as “a one-stop shop” to address the taxi industry’s concerns relating to plates and other issues, Mr Pintard added that industry and union sources thought it “was virtually impossible for the Government to execute it in the way it was being executed”.

Asserting that it was “impossible for the controller to issue that volume of plates without the concurrence and direction of someone senior to him”, meaning the policymaker level represented by ministers and the Cabinet, the FNM leader charged: “Under what circumstances were these plates being issued, and who was doing the issuance? No controller without the concurrence of his seniors would issue that amount of plates.”

Mr Pintard said the over-saturation of taxi plates would “make it unprofitable for some members of the industry”, adding that the Opposition had received its information from sources in the Ministry of Transport and Housing as well as the taxi industry. He also called on Mrs Coleby-Davis to say whether the Government will grant taxi drivers their sought-after rate increase, and to explain why if this was to be rejected.

“The Government has an obligation to clarify for the public so that a cloud does not hang over Mr Bowleg’s head, the minister’s head or the permanent secretary’s head,” the Opposition’s leader added. “This could be resolved by the Government responding through its multi-million dollar PR machinery with what the facts are.”

Mr Watson, in reply, said Commander Bowler, who he described as “a highly decorated” Royal Bahamas Defence Force (RBDF) veteran officer, had been holding down the controller’s job in Nassau until Mr Smith finished setting up Road Traffic offices in the Family Islands. “The Opposition is fishing for something that doesn’t exist,” he added.

Taxi plates are like hookers here. You get one just to sell her to the highest bidder.
The taxi union is basically just a trafficker dealing in plates for a profit. NASTY BUGGERS!!

If something smells crooked and is run like a drug cartel then you know that government is involved.

And our corrupt, roly-poly and most incompetent PM is unwilling to do shiit about all the nonsense that has been going on with taxi-plates for decades now.

As for loony-toon Jobeth Coleby-Davis, why hasn't she been arraigned for the attempted homicide of a police officer using a vehicle she was driving??!! Police Commissioner Fernander has no doubt seen all of the video and audio evidence of the incident that went viral on the internet. What's he waiting on......she should have long ago been placed in hand-cuffs and hauled before the courts.

Fernander got a settlement, don't forget that. He ain't biting the hand that feed him. Sorry for the officer. he should bring a civil suit.

Most of us who post comments on this website know you've always been a big believer in 'two wrongs make a right'. And that makes you a shining example of all that's wrong with supporting a political party above all else in our country today.

So true. Birdie is a constant reminder of the deep rooted issues that the country has to overcome before we can hope to achieve 'good governance'.

"Good Governance" and "Political competence" are Oxymoronic where the Bahamas is concerned.

Taxi Drivers have to be Vetted aside the commercial Drivers license required? Is that vetted by the PLP? We all know taxi plates was one of the first instruments of political power held over the heads of Bahamians! Will be hard for them to dismantle such an entrenched system of political patronage.