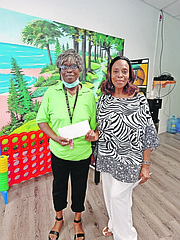 Claire Fox (right), founder and president of The Bahamas Grandparents' Foundation, held a major distribution of food, clothing, and other items at Grand Bahama Resilience Center.

THE Bahamas Grandparents’ Support Foundation, a newly formed non-profit organisation, is helping grandparents who are caring for their grandchildren in their golden years.

Founder Claire Fox, a 71-year-old doting grandmother of five, said the idea for such an organisation was a vision she received from God three years ago. 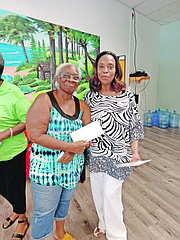 “Our mission is to assist grandparents who are raising their grandchildren. We provide support through distribution of food, clothing, and in other areas. We also have retired teachers on board to assist with education,” she said.

“The food drives have been excellent; people just gave willingly, and we thank them for their support so that we can bless others,” she said.

On Monday, the organisation held a major distribution of food, clothing, and other items at the Grand Bahama Resilience Centre in the Seahorse Shopping Plaza. 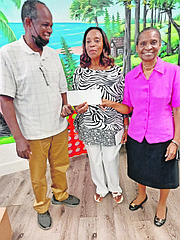 According to Ms Fox, the organisation has been getting support from the Grand Bahama community since obtaining its license four months ago.

“We sent letters out and support is coming in,” she said. “We received gift certificates for shoes, and a donation of 40 pairs of girls’ sandals and clothing,” she stated.

The retired civil servant, who worked at the Consumer Affairs Department for 25 years, said that her passion is to help others. At age 71, she said she loves being a grandmother.

“Grandparents play an important role in the family by instilling morals and values and passing on the family’s culture,” Ms Fox said.

In the Bahamas, she said many grandparents are now taking care of their grandchildren in their golden years.

“You must be emotionally, physically, and spiritually prepared to raise children. It is a very heavy responsibility, and a lot of these grandparents are on a fixed income,” she explained.

The organisation will hold its monthly meeting in East End, Freeport, and Eight Mile Rock to educate grandparents on various relevant topics by inviting speakers to talk to them. Ms Fox said they have a spiritual advisor who also is ready to assist.

Ms Fox said September 11 is known as International Grandparents’ Day. “The Bahamas does not recognise it as yet, and I would love to see Grandparents Day become big as Mother’s and Father’s Day,” she said.

The parents who failed the parents of this generation should not be praised for selling their souls to Pindling's agenda in the 1970s & 1980s drug era.

We are reaping the Pindling whirlwind today.

The Bahamas has a lot of "baby daddy" and a lot of women who "get big up", it has a smaller number of actual fathers and mothers.

If the first 2 groups could be legally prevented from voting, then the country could improve.

That will exclude many MPs

Sheep runner you talking about Mr Pindling of NIB the collage of the Bahamas free high school education , increased middle class , folks from over the hill coming to the top of the hill so many proud to be Bahamian

Mr Pindling was a great man with vision

Many with real vision say he was a great crook🤣

Just is a great initiative where 1960s and 70s values meet our 1980s and 90s list generation. Looks like Pathfinders and Scouts are returning also.

Sounds again like an individual who wants to do good but is lacking proper organization. Hearing alot of these narratives lately. Minus the good intentions (and helping elderly is one of the best) charities are a breeding ground for fraud that's why proper organization and adherence to good policies are so important

While you may think people asking you to follow these strict rules are looking at you as a thief, it's actually the opposite, you are telling your lifeblood, "your donors", I am not a thief

DDk what I have written about Mr Pindling are facts recorded in history the people you know with vision will you mention their names and the evidence they have , Otherwise it is parrot talk cheap

Commission of inquiry. Great men can have great vices same as small men

This is a fantastic idea and group!! It's truly amazing when these individuals should be relaxing and enjoying their hard-earned retirement and instead they step-up when needed and decide to help raise the grandkids. I'll definitely be looking to help donate anything they need to this group!