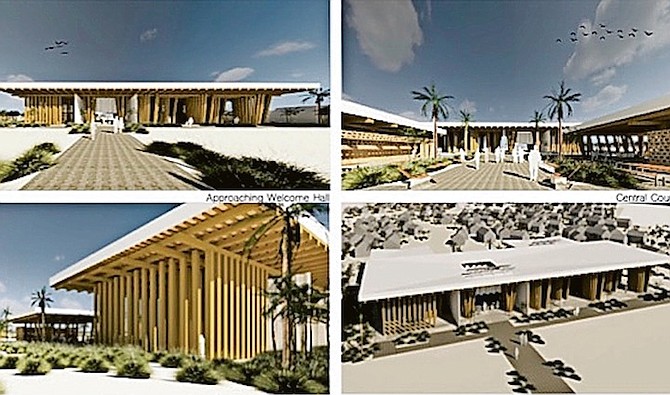 RENDERINGS OF THE SPRING CITY TOWNSHIP.

• Be self-financing, sustaining and create 110 jobs

Abaco’s local government and non-profit groups are offering to partner in creating a near-$4m memorial to Hurricane Dorian victims that will also give Marsh Harbour’s shipping port room for much-needed expansion.

Roscoe Thompson, head of the Marsh Harbour/Spring City Township, told Tribune Business that body had teamed with the One Abaco Foundation and Guy Harvey Foundation to propose “a vibrant community space” that could create more than 100 jobs where the former 23-acre Mudd community once stood.

Disclosing that the proposal was submitted to the former Minnis administration, and subsequently to Cabinet ministers in the new government as well as the current Port Department board, he explained that the partners were proposing to set aside six acres for a new administration and Customs warehouse building for Marsh Harbour’s commercial shipping port.

Mr Thompson, explaining that this would facilitate greater container storage space and potential expansion whenever the port is rebuilt, told this newspaper that the remainder of the former Mudd site would be dedicated to remembering the hundreds who lost their lives in Dorian as well as providing facilities and a gathering space for Abaconians.

Besides a memorial garden, the partners have also proposed constructing a basketball court and small amphitheatre at the site, the latter of which would be used to host homecomings, regattas, gospel concerts and other community-based events. Walking paths, a children’s playground and vendor stalls, where foods, Bahamian dishes and art can be sold, are also incorporated into the partners’ plans.

Revealing that the proposal would 100 percent financed, built and maintained by the private sector and the non-governmental organisations (NGOs), Mr Thompson said that to-date it had been acknowledged by just one Port Department executive despite being e-mailed to them after the meeting held by the agency in Marsh Harbour just two to three weeks ago to discuss plans to rebuild Abaco’s commercial shipping port.

Crediting Ken Hutton, former Abaco Chamber of Commerce president, for being the primary driving force with whom he and the township have partnered, he told Tribune Business: “There’s so much that could be done. We don’t want to turn it into a business district. Thousands of people died there, even though the Government won’t admit it. I think it would honour a lot of people.

“The majority of it should be used as a memorial garden with green space. The Government would control the first four to seven acres, and the back would be opened up as a garden. We’re trying to get something where the Government will partner with the NGOs, and give the guidelines and restrictions as to what needs to be done on the port side with regard to security, fencing and the administration building.

“But all construction and funding would go through the NGOs, not the Government. The Government should not be the one responsible. Moving the port administration building there would allow [free up] the whole right side of the port, enable the parking lot to be fenced in, and they could expand the port. It would make the port larger on the water side,” Mr Thompson continued.

“It would allow more area for containers on the waterfront side. You would be able to come out to the road and fence it off. Where the port building used to be, it can now be used for the storage of more containers. They really have nowhere to expand the port currently, but could if the right side, where the port building used to be, becomes more space for Tropical Shipping or whoever brings in freight. It makes sense.”

Mr Hutton could not be reached for comment yesterday, but Mr Thompson said he was “very disappointed” that only one Port Department official had replied to the proposal to-date. Prior to the meeting on the new port, no representative from that agency or the Ministry of Transport and Housing who was present said they had seen it.

This, he added, was despite it being sent to James Albury, former central and south Abaco MP, and ex-parliamentary secretary in the Prime Minister’s Office under the Minnis administration. Mr Thompson said it was subsequently sent to his successor as MP, John Pinder, on October 20, 2021, and also sent to JoBeth Coleby-Davis, minister of transport and housing, on August 31.

“They had not even heard of the project when I stood up in the meeting and advocated for it,” he added. “I said I would have a chat with the NGOs and other persons involved to see if they are still interested in moving forward. That’s when I reached out to Ken Hutton, and he said that for himself and them, it’s still a go-ahead.” Clay Sweeting, minister responsible for Family Island affairs, and Antoinette Thompson, permanent secretary in the transport ministry, were also said to have received copies.

The Memorial Garden and Community Park proposal, which has been seen by Tribune Business, pegs the total construction cost at $3.685m. The most expensive items would be the $900,000 amphitheatre; $850,000 for landscaping; and $800,000 associated with the cost of materials and construction for 20 vendor stalls.

“For the last 22 months the area formerly known as The Mudd in central Marsh Harbour has remained a fenced-in, overgrown and unmaintained plot of land unused and unusable by the community, unmarked and unremembered for the horror and tragedy that took place on September 1, 2019,” the proposal said.

“A group has come together to propose to rectify this situation by creating a vibrant community space where our people can gather in comfort and safety while remembering those who were taken from us by an historic hurricane named Dorian.

“The park would be maintained by a non-profit organisation through private donations and funds raised from hosting events and renting vendor stalls. Any excess revenue would be channelled back into the community via the non-profit.... All funding for the project would be provided through private sector donors and sponsors. No government funding is required.”

Donated funds would be managed by US-incorporated One Abaco Foundation and its Bahamian registered, certified affiliate, Abaco Resurrect Association. One Abaco was said to have formed a five-year partnership with the Guy Harvey Foundation that will see charitable events held locally to raise monies for ocean protection and other causes.

“Both entities are required to maintain fully transparent and accountable accounts for regulatory purposes by their respective governments,” the project proposal said. “It is envisioned that a local committee will be formed to decide on a design and plan for the site. The committee would include community leaders along with appropriate local and national government representatives, where necessary.

“It is estimated the property will directly employ up to ten persons, and indirectly up to 100 through rented vendor stalls. All revenues generated by use and tenants would be used to maintain the property, with any excess being donated to local Abaco causes as directed by the park board of directors. The board composition and members will be decided by the initial forming committee.”

Mrs Coleby-Davis, addressing last week’s Abaco Business Outlook conference, agreed that “very little action” has been taken to rebuild Marsh Harbour’s commercial shipping port - the main freight gateway into the island - in the three years since the facility was destroyed by Hurricane Dorian. However, she said “more information will be shared with Abaconians in short order” on plans to develop a replacement via a public-private partnership (PPP).

“I wish to advise efforts to rebuild an efficient and secure port system are underway,” she promised. “A PPP was sought to create the performance dynamics of a modern port and develop quality infrastructure for every dollar invested.”

Why are we wasting time on immaterial things and not trying to get Abaco functional again???

While these people are fiddling with the Old Mudd/Pigean Pea, a new one is popping up in the bushes elsewhere ................ That is the timebomb that has not been defused in Abaco.

Wow! I sure hope you never lose a loved one to a major storm. cold heartless arsehole you appear to be right at this moment. Wow!

I dont think he meant any disrespect to people who lost relatives. He has a valid point, it does seem as if to date its all ceremony and not much actual progress

Me thinks Sheep-$#&%er has a personal interest in acquiring some of this most valuable asset of land in Central Abaco and now he is upset that he might not get his sticky fingers into it. Wow!

I agree with sheeprunner. Its a Dorian obsession. what has come of 3 years of talking about the worst disaster ever? Nothing. It is an obsession, a billboard, a park cleanup, a school bag give away, roses on Mothers day, chocolate on valentines. Busy work.

The world moving on, correction "moved on", we cannot be hung up on one disaster forever. Set some relief goals, get them accomplished because hurricane season comes every yeae

I am afraid too many private shady interests are trying very hard in the background to acquire this most valuable land for themselves. In time we will find out in the long run which crony got that nice benefit for their campaign trail support. Again, I suggest that any crown land acquisition should be done buy public auction and not secretive OPM backdoor signatures.

This is a great plan. It is a win, win for all. The money wasted on North Abaco harbour should have been placed on expanding Marsh Harbour. Now is the time to get it right.

Trust me comrades, you won't have to bother looking for evidence, outside of the Holy Bible to appreciate why Comrade Roscoe Jr, is as solid of an living original son of the Abaco's salt as there is. Some go as far as to say, you can't get any more pedigree in that Roscoe Jr's, bloodlines are linked all the way back to our out islands First Founding Father, the Spaniard,, Comrade Christopher Columbus ― Yes?

Decisions on erecting monuments should not lie only with the central government in New Providence. The local government should have a say in this matter. The local residents can decide how they want certain events important to them commerated.

There is every reason for the major out islands to create paths to greater self-governance, thus preserves the powers of individual out islanders ― Yes?

"estimated the property will directly employ up to ten persons, and indirectly up to 100 through rented vendor stalls"

So the non profit wants the land... lease/rent doesnt matter, who's going to bulldoze a Dorian memorial to get land back? I would say they need to have some serious checks and balances in place to ensure that the implementation and use matches the beauty and functionality of what is planned. We dont need an Oban land grab or a straw market and we dont need a half finished project with one building developed in 20 years.

I do hope they have strategies, should this come to fruition, to ensure this doesnt turn into an unsightly straw market with cheap tshirts and bags hanging over every bare wall inside and outside

@comradeThusIsOurs, the only makes sense reason I can think of explain, why Roscoe Jr, never got elected as an Abaco MP, nor appointed to Papa Hubert's, nor Minnis's cabinet, is because. he'd be too miserable as someone's suck-up-to ― Yes?

I mean a much better use of the The Mudd, would probably to build a large public housing estate of semi-detached or attached buildings with multi stories but that would probably be to sensible for this government and to unprofitable for private interest to invest into.

Next to a commercial port? How will that expand?

Who owns the Mudd/Pea property???

Why is that such a "hidden in plain sight" matter???