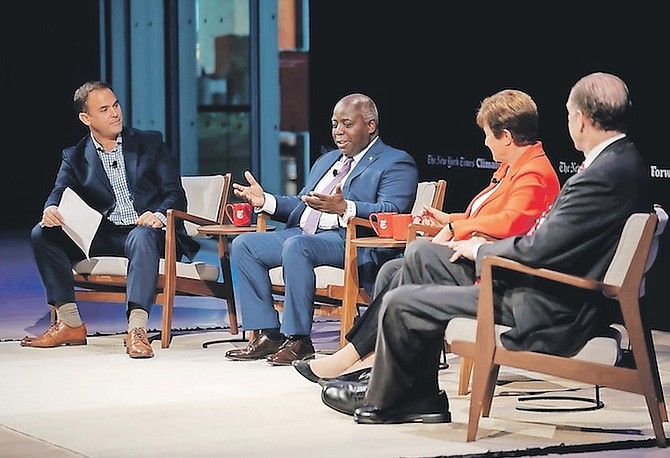 PRIME Minister Phillip “Brave” Davis has called on industrialised nations who contribute heavily to climate change to pay for the hardships brought on by the phenomenon.

Mr Davis made the comment as a panel guest at the New York Times’ Climate Week Conference.

The panel’s theme was “Money in Action: Closing the Climate Finance Gap”. The panel discussed issues that affect the climate crisis, along with how and why governments should be incentivised in climate finance and sustainable development.

Prime Minister Davis explained what he expects from the global community, developed nations, and the private sector in an effort to withstand natural disasters in the years to come.

“First of all, all pledges or what I call committers who promise that they are going to make available the monies that they said,” he said. “For example, in 2015 it was supposed to be 100 billion each year, but none of this has been realised to date.”

He said those countries heavily contributing to climate change need to “pay the bill now.”

“We need action, and we need to find ways and means to have the industrialised world countries who have been burning fossil fuel for centuries, that have had this cloud of carbon in the air, it’s time to let them pay the bill now,” he said.

Mr Davis explained the government’s reliance on the private sector to bring about change.

“In addition, we think governments can’t do it alone,” he said at the conference yesterday.

“I have set up legislation to engage article six of the Paris Accord to have the private sector engage in the voluntary market, carbon market by offsetting through purchasing carbon credits,” he also said.

Mr Davis said it is expected that this legislation will allow for The Bahamas’ carbon credits to be sold on the market by the first of next year.

He also said since taking office last year, the debt to GDP ratio has been reduced from 105 percent to 85 percent.

“When I took office last year, my debt to GDP ratio was 105 percent. Fortunately, I’ve brought it down to about 85 percent and it’s still going down,” he said. “So, they have to visit this debt to sustainability issue in the context of adaption, mitigation, loss, and damage, particularly when it’s the results of climate change.”

In case you don't know this, politicians only lie when their lips are moving,

Cruel Davis is indeed a masterful liar of the highest order.....right up there with the likes of Chester the Jester, Halkitis and, of course, tyrannical Minnis. Our 'real' debt-to-GDP ratio is actually higher than ever no matter how much Halkitis may play with the numbers, period!

Our 'real' debt-to-GDP ratio is so dire, roly-poly Davis has now unabashedly and most shamefully annointed himself Beggar-in-Chief of the Bahamian people in the eyes of the world. And we all know he's really begging for himself and his favourite cronies, and not us Bahamians.

When will the mask mandate be lifted?

The more appropriate question is:

When will the corrupt Davis-led PLP administration call an end to the unconstitutional emergency powers that authoritarian and tyrannical Minnis bestowed upon government at the beginning of the so called "COVID-19 crisis"?

Those unconstitutional emergency powers are now being used by the corrupt Davis-led PLP administration to do all sorts of shenanigan things behind the scenes.

What a load of BS. We do nothing here at all about climate change or just pollution in general.

And he brought the dept to GDP ration down from 105% to 85%? Not likely, if that had actually happened we would never stop hearing him and Mitchell run their lips about how great they are.

I am sure the financial analyst in New York were having a ball about the clown of a leader we have with that comment.

Yet BPL still using dirty bunker, expensive diesel & kerosene to provide climate dirty eratic power. When there are proposals for cleaner, cheaper, natural gas on their desks for four years+ !!!!. No decision while the ink fades... international investors want to see what YOU ARE DOING for your country BEFORE they open THEIR checkbooks. I.e.: Teenagers, clean up you room, then clean up the world... Mother's favorite statement.

Obviously Davis hasn't been stuck behind a Jitney for a long while.

Can't help but wonder if our new self-anointed Beggar-in Chief for The Bahamas seized the opportunity of his attendance of the Queen's funeral to raise the subject of slave trade reparations with King Charles III. Shameless Davis just loves begging for 'his people' whenever he gets an audience abroad.

Start by turning cruise ships away!

Or better by taxing them, seeing as all of them own land in our country.

All major polluters should be charged an Environmental Mitigation Levy

In addition to the one-time fee per passenger per trip, each cruise ship should be charged a very hefty fee per day for the use of our territorial waters.

Hundreds of these cruise ships were allowed to seek refuge (anchorage) in our territorial waters during the height of the COVID-19 pandemic because they needed to be as close to the U.S. as possible. What compensation did our country get for their anchors tearing up our seabeds and sensitive coral reefs during that period of time, not too mention all the contaminants and other waste they dumped in our waters back then??!!

D'Aguilar and Jibrilu must have made out like bandits for all the gratis favours they extended to the cruise ship industry during the COVID-19 crisis.

Be advised that CO2 constitutes only 0.04% of our atmosphere! Without it no plants can grow, and we all die.

That is so great. I feel so much better already.

True to form, the fossil fuel loving @ColumbusPillow chooses to ignore the fact that plants around the world are rapidly disappearing while CO2 levels are rising. Satellite images of the foot print of the Amazon Jungle decades ago compared to now show shocking significant shrinkage of plant life in that equitorial rainforest, the largest one in the world.

This is what happens after new premiership in face-to-face telling England's new King of his premiership's plans disconnect the archipelago of 700 islands and 2,000 rocks and cays strewn like confetti across  the English pond, he's left go in search of replacement of the billions of pounds his finance minister, must now forgo was much anticipated as financial windfall due as a colony of the English empire, as pay up in the Billions of Pounds in compensation to its enslaved popoulaces of claimants' ― Nah, Comrade King Charles 111, is no fool his English pounds.

I cringed when Davis told them that they have been polluting the atmosphere for centuries and must pay up.

Those two words "Pay Up" are the first words out of corrupt Davis's mouth whenever he meets prospective foreign investors for the first time in private. And they usually roll off of his tongue while he has his two hands extended out in the shape of a cup that must be filled....his cup!

These persons talking about climate change are becoming their own worse enemies. Do what I say not what I do. How about we stop the huge amount of cruise ships polluting our waters, have you seen the size of those ships and how many pile into the harbour along Bay St. How about instead of flying around all over the world you attend some meetings virtually. Talk alone will not fight against climate change but personal action.

On a per capita basis then The Bahamas may be one of higher polluting countries. We have an antiquated power generation system, a lack of public transportation so most people drive a private vehicle. We have well over 100,000 vehicles in a population of under 400,000. The only real industry in the country is mostly dependent on air travel, which is considered a major contributor to the dramatic increase in carbon in our atmosphere. We have a plank in our eye while pointing out the motes in the eyes of others.

This is great that Mr, Davis was able to speak for the Bahamas to a wide audience the wise will understand the fools will just talk fool

“We need action, and we need to find ways and means to have the industrialised world countries who have been burning fossil fuel for centuries, that have had this cloud of carbon in the air, it’s time to let them pay the bill now,” he said.

I am reading this and wondering if Davis head is jam. Is this not the guy who was the minister for BPL and yet not once did he do anything to have the fossil fuel burning company go solar? Since coming to power has he brought the government vehicles that don't run on fossil fuels? Has he made government buildings solar powered?

Or, to prepare for what is coming. More frequent and stronger hurricanes. Sea level rise. Extreme heat. Davis is intellectually lost. He may make a fine attorney, where truth is subjective, but there is a real world the rest of us must deal with.