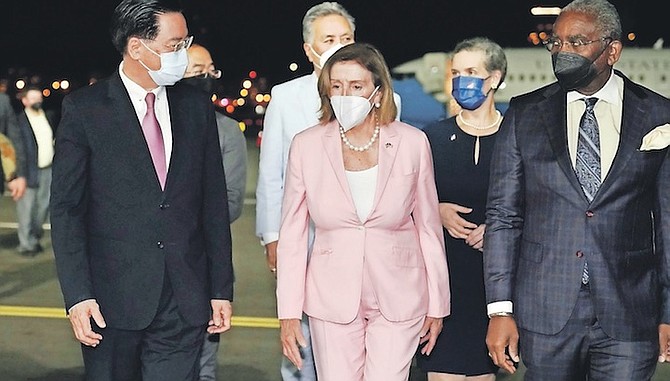 Chinese ambassador to The Bahamas

US House Speaker Nancy Pelosi’s recent visit to Taiwan was provocative, reckless and dangerous. The visit, which was the culmination of misguided US moves to challenge China’s core national interests, left the political foundations of China-US relations shaken and drew an expectedly strong reaction from China.

The visit also revealed a routine lack of historical knowledge and respect for other people’s feelings among the American political elite.

Understanding the history of the Taiwan question, its cardinal importance to the 1.4 billion people in China, and its centrality to the most consequential bilateral relationship in the world today is crucial for deciphering current developments in objective and balanced ways.

We will now go back in time and examine the origins of the Taiwan question and the one-China principle, trace their evolution in the context of China-U.S. relations and cross-Strait interactions, and assess where the situation is headed in a three-part series in these pages.

One country, one people

Taiwan is the largest island of China, known as the “treasured island of the motherland”. It lies on the western edge of the Pacific Ocean and faces Fujian Province to the west through the Taiwan Strait, the narrowest point of which is only 80 miles, with some of the outlying islets of Taiwan just a few miles from the coast of Fujian.

The Taiwan Strait is part of a busy international shipping lane. Almost all the maritime traffic to and from China’s eastern coast and the Sea of Japan pass through it.

The island covers an area of 36,000 square kilometers, slightly bigger than Belgium and smaller than Switzerland, and has a population of 23 million.

The people of Taiwan are descended from the same Chinese ancestry and cultural roots as those on the mainland. Ninty-eight percent of Taiwanese are Han Chinese speaking the same language as their brothers and sisters on the mainland, and they speak the dialect of southern Fujian. People across the Taiwan-Strait learn from the same ancient Chinese classics and celebrate the same festivals.

More than 150,000 Taiwan residents live on the mainland today. They increasingly enjoy the same treatments as their mainland compatriots, including having social security accounts. The year 2019 saw 9 million visits made between the two sides of the Taiwan Strait.

Taiwan has been part of China since ancient times. A large number of historical records document the development of Taiwan by the Chinese people in earlier periods. One of the earliest references was found in Seaboard Geographic Gazetteer compiled in 230 AD by scholar Shen Ying of the State of Wu.

The royal court of the Sui Dynasty (581-619 AD) had on three occasions sent troops to Taiwan, called Liuqiu at that time. Since the Song (960-1279 AD) and Yuan (1270-1368 AD) dynasties, the government of China set up administrative bodies to exercise jurisdiction over Taiwan.

In 1624, Dutch colonialists invaded and occupied the southern part of Taiwan, only to be expelled in 1662 by General Zheng Chenggong who was hailed as a national hero. The Qing court set up the Taiwan prefecture in 1684 under the jurisdiction of Fujian Province to strengthen its control over the island. In 1885, Taiwan’s status was upgraded to be the 20th province of China.

In 1895, the Qing court, which was defeated by Japan in a maritime war, was forced to cede Taiwan and the Penghu Islands to Japan. Yet the long suffering Taiwan people were never forgotten. While resisting Japanese aggression, leader of the Communist Party of China Chairman Mao Zedong said to American journalist Nym Wales in May 1937 that China’s goal was to “achieve a final victory in the war that would recover the occupied Chinese territories – and secure the liberation of Taiwan”.

In December 1943, China, the United States and the United Kingdom, as allied powers during WWII, issued the Cairo Declaration which stated that “It was the purpose of the three allies that all the territories Japan had stolen from China, such as Northeast China, Taiwan and the Penghu Islands, should be restored to China”. The Potsdam Proclamation signed by the three countries in July 1945 reiterated: “The terms of the Cairo Declaration shall be carried out.”

In September of the same year, Japan signed the instrument of surrender. In October the Chinese government announced that it was resuming the exercise of sovereignty over Taiwan, and the ceremony to accept Japan’s surrender in Taiwan Province of the China war theater of the allied powers was held in Taibei (Taipei).

From that day on, China had recovered Taiwan de jure and de facto.

Despite the protracted political stand-off across the Taiwan Strait, the sovereignty and territory of China have never been divided, and Taiwan’s status as part of China’s territory has never changed.

Taiwan became an issue as the result of China’s civil war and foreign interference.

During the war of resistance against Japanese aggression (1931-1945), the Communist Party of China formed a united front with the then ruling Party the Kuomintang to fight Japanese imperialists. After victory over Japan, the Kuomintang headed by Chiang Kai-shek, turned their guns on the Communists and launched an all-out civil war.

Chiang thought victory was in the bag, as his army was more than three times bigger than the Communists’ and he had American backing of money, weapons and advisers. Yet his regime had long lost the support of the Chinese people due to its utter corruption and ineptitude. The government of the “Republic of China” in Nanjing was thus overthrown and the People’s Republic of China was proclaimed in October 1949.

Chiang retreated to Taiwan and created the division across the Taiwan Strait that has persisted to this day.

The US adopted a policy of isolation and containment of the newly established People’s Republic. When the Korean War broke out in June 1950, President Truman ordered the Seventh Fleet into the Taiwan Strait and the U.S. 13th Air Force to set up base in Taiwan. In December 1954 the U.S. further concluded with the Taiwan authorities a so-called mutual defense treaty placing China’s Taiwan under U.S. “protection”. Henceforth Taiwan became a major issue between China and the United States.

Although overthrown by the Chinese people and having retreated to Taiwan, the Kuomintang regime has continued to use the designation “Republic of China” and to occupy China’s seat at the United Nations due to the US hostile policy toward New China.

This resolution settled once and for all the political, legal and procedural issues of China’s representation in the UN, which covered the whole country, including Taiwan. It also spelled out that China has one single seat in the UN, so there is no such thing as “two Chinas” or “one China, one Taiwan”.

On the day of its founding, the government of the PRC declared to all countries in the world, “This government is the sole legitimate government representing the entire people of the People’s Republic of China. It is ready to establish diplomatic relations with all foreign governments that are willing to abide by the principles of equality, mutual benefit and mutual respect for each other’s territorial integrity and sovereignty.”

Up to now, 181 countries have established diplomatic relations with the PRC on the basis of the one-China principle and they handle relations with Taiwan within the one- China framework, whereby only unofficial economic and cultural links are maintained.

Taiwan is central to the Chinese people’s conception of national identity and righting an historical wrong. The Chinese people have had painful memories of their country losing territory to invading imperialist powers in all directions since modern times.

If there’s one thing that unites the 1.4 billion Chinese people, it is the profound yearning for the reunification of China and the firm resolve to safeguard national sovereignty and territorial integrity. The will of 1.4 billion people should never be taken lightly.

For a fair balance we shall look forward to Taiwan's viewpoint being expressed. It is obvious that ,after experiencing democracy and free elections for a long time, they are reluctant to being absorbed by the Communist Chinese Government.