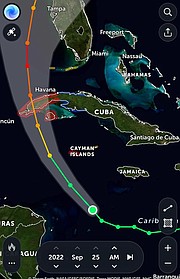 Ian is forecast to be a major hurricane when it passes near or over western Cuba, and there is increasing confidence in a life-threatening storm surge and hurricane-force winds in portions of western Cuba beginning late Monday. Hurricane and tropical storm watches are now in effect for much of western Cuba. BUT uncertainty in the long-term track and intensity forecast is higher than usual. Regardless of Ian’s exact track and intensity, there is a risk of dangerous storm surge, hurricane-force winds, and heavy rainfall along the west coast of Florida and the Florida Panhandle by the middle of the week, and residents in Florida should ensure they have their hurricane plan in place, follow any advice by local officials, and closely monitor updates

Therefore, the initial intensity is held at 50 mph (45 knots), which is in line with the latest subjective and objective satellite estimates. It should be noted that the advisory position is a compromise between the low- and mid-level centers as it is quite likely that a new low-level center will form.

Due to the current lack of center definition, the initial motion estimate is a somewhat uncertain 285/10 knots. The track forecast philosophy remains unchanged, with Ian forecast to move around the western periphery of a subtropical ridge located over the western Atlantic. Ian is forecast to turn northwestward later today (September 25), passing near or southwest of the Cayman Islands on Monday, and approach western Cuba on Monday night or early Tuesday.

While the models agree on the overall scenario, there are still significant differences regarding the exact track of the storm, especially after 72 hours.

The UKMET and ECMWF models continue to hold firm along the eastern side of the guidance and show a track into west-central Florida, while the GFS and HWRF remain on the western side, taking the Ian into the central or western Florida.

The updated NHC track continues to split these differences with the cross-track spreading remaining between 200-220 nautical miles at days 4 and 5, it CANNOT BE OVERSTATED overstated that significant uncertainty remains in Ian's projected track.

Users are urged to not focus on specific forecast intensities in the 4- and 5-day forecasts and instead focus on the potential hazards Ian may produce.