PETER YOUNG: Time will tell if a new monarch and PM can deliver on their early promise 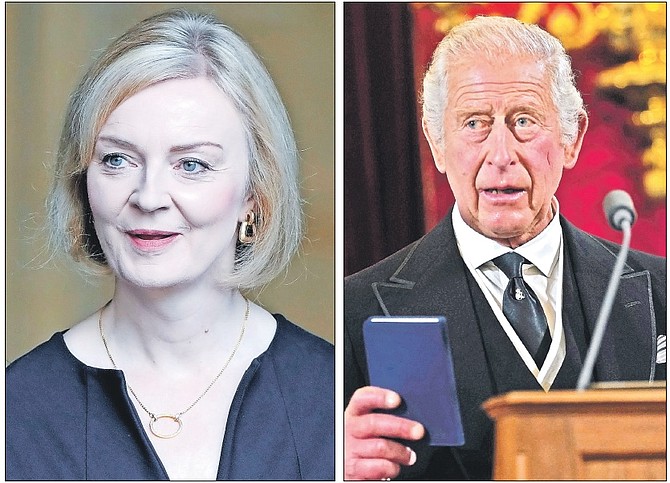 These have been momentous times in Britain. The nation has suddenly, and simultaneously, had to face up to the loss of a much-loved and revered head of state and to an enforced change of Prime Minister. In a less politically stable country that could have had serious repercussions.

A few weeks ago, in the run-up to the announcement of the winner of the Conservative Party leadership contest, people were talking about a new British premier being left with the ‘most horrendous inheritance’ since Winston Churchill in 1940. This was because of the myriad serious problems currently affecting Britain, though others suggested the political and economic turmoil facing the incoming Margaret Thatcher in 1979 was almost as bad. However, none could have foreseen that, the new Tory leader, Liz Truss, would be confronted - so soon after assuming office - with the demise of the nation’s head of state.

The passing of The Queen has already had overwhelming consequences for the whole country. The likely lasting effects will be so extensive as to be incalculable. But it is inevitable that some of them will have a major influence from the word go on the work of the new PM. Meanwhile, for many people it was hard to take in that The Queen received Britain’s new head of government in her last public duty as head of state only two days before passing away.

In Britain as a constitutional monarchy, continuity is a key element in maintaining stability. For the nation as a whole, the accession of King Charles III seems to have taken place almost seamlessly. He has hardly put a foot wrong in leading the national mourning for his mother, the longest serving monarch in Britain’s history. He has led the mass of tributes to her, speaking eloquently and movingly about his own, and the wider Royal Family’s, loss as well as that of the people. By immediately visiting other parts of the United Kingdom, he has also brought people together in their grief and affection for an illustrious monarch; and this has served to strengthen the Union itself.

The mantle has been passed to the new King who has pledged to carry on his mother’s work based on her well-established values, but it remains to be seen how he will do this in practice. As emotions recede and the reality of everyday life re-emerges, the public will be watching closely as he gets in to his stride. Almost inevitably, he will introduce change, and, even though that will be welcomed by many, it will bring with it uncertainty, concern and, sometimes, apprehension.

Meanwhile, for her part Liz Truss has made an impressive start. She has behaved with notable dignity, showing tact and decorum at a time of national sorrow and there has been no attempt to exploit the nation’s grief for political advantage, as others might have been tempted to do. She is reputed to be a plain-speaking woman of principle with an inner steel and to possess a formidable work ethic.

The new premier has already been faced with a number of crises to which she has reacted with energy and decisiveness, and this has demonstrated her resilience. While stressing the UK’s constitutional monarchy, underpinned by a democratic society, has consistently delivered stability and progress for Britain, she is already talking about fundamental and radical change in a new era, and that this involves charting a fresh course for the country with an emphasis on economic growth.

This comes as no surprise because she explained during the leadership contest her belief in the importance of wealth creation and that high taxes and regulation were holding back Britain’s economy. In simple terms, she says her mission is to increase the size of the economic pie, not just work out how to slice it up as politicians normally do.

Truss has made it clear she plans to do this by cutting taxes and creating the right conditions to kick-start the economy and stimulate growth. She has taken decisive action already. Last week, the new Chancellor of the Exchequer produced what is being called a tax-cutting mini-budget to begin reform of the fiscal and regulatory system with the aim of unleashing the country’s full potential post-Brexit.

However, one immediate negative effect is to have contributed to pushing sterling to its lowest ever level against the US dollar. This increases the cost of imports and is thus inflationary, but it also boosts exports.

This new policy is, of course, controversial. Economists have differing views and will challenge it, not least because of concerns about incurring more debt and the higher cost of borrowing needed to offset the loss of revenue. It also raises questions about the extent of state control and involvement and how much money is taken from people’s earnings, which is invariably the key dividing issue in politics. The Tory creed is small government, low taxes and minimal bureaucracy, but also incentives and support for commerce and industry in order to achieve economic growth and increase prosperity; and it is clear Truss believes in all of that.

Interestingly, she made an impressive - and what has been labelled even magisterial - address at the UN General Assembly last week in which she spoke of the values of individual liberty, self-determination and equality before the law, stressing freedom and democracy must prevail. She pledged further support for Ukraine while hurling defiance against Putin’s latest sabre-rattling threat about using nuclear weapons - and she confirmed Britain’s long-term commitment to the struggle against what President Zelensky has called the fight between ‘good and evil, light and dark’, as Russia had undermined the stability and security of the whole world.

The new PM has demonstrated she has a clear vision of how Britain ought to be governed. Some will be unhappy about her new approach. But the evidence shows already that it will be music to the ears of others to learn she is a believer in a limited state, personal responsibility and free enterprise.

The general consensus at this early stage appears to be the country’s two new leaders - both King and Prime Minister - have started on the right foot. That augurs well for the nation. But, as always, only time will tell.

Russia’s aversion to the truth

REPORTEDLY, in the centre of the Lithuanian capital, Vilnius, a large banner has been taped to a tall building above a Ukrainian flag that reads: ‘Putin, The Hague is waiting for you’. That refers, of course, to allegations of Russian war crimes now being investigated. It may only be one individual expression of discontent but it is an indication of growing opposition to Putin’s so-called ‘special military operation’ in Ukraine, known to everybody else simply, and brutally, as war.

Moreover, it is also a sign of the times that this should be in Lithuania which was part of the Soviet Union for 50 years and which, with the other Baltic states Latvia and Estonia, has banned all Russian tourists on the basis that they should not be enjoying democracy and freedom in Europe while their own country attacks those same values in Ukraine.

With this in mind, last week’s proceedings of the United Nations General Assembly have been a platform for many countries to express their frustration and opposition to the war in Ukraine. It has shown Putin is facing growing global discontent over his actions there - although, in the case of countries that continue to rely on Russia for oil and gas supplies, there has been a shift of tone rather than substance in referring to negative global fallout as they have stopped short of openly taking sides and voicing outright condemnation.

Even Russia’s staunchest allies like China and India, which purchase Russian energy and have stayed friendly towards Moscow, are now questioning the wisdom of the war and are calling for a ceasefire. President Xi Jinping has expressed ‘concern’ and Prime Minister Narendra Modi has told Putin that ‘today’s era is not an era of war’. Simultaneously, Putin has announced an escalation of the war and threatened the use of nuclear weapons.

In the midst of all this, the Russian Foreign Minister has cut a defiant figure at the UN but has become increasingly isolated. As well as maintaining Russia could not ignore NATO’s expansion towards the east, he continues to insist the war is justified on the grounds that Russia was defending itself - and the supposedly oppressed Ukraine-based Russian speakers - against a neo- Nazi regime in Kyiv. But most people know such a claim is not based on reality. He also continues unjustifiably to attack the US for undermining the global rules it claims to uphold. Anger and opposition are also growing domestically as Russians stage street protests and young men seek to leave the country to avoid military service.

Russia is now holding a referendum at very short notice in each of the four eastern Ukrainian regions that are mainly Russian-speaking. It has become clear this is aimed at annexing territory which Moscow has already taken by force. People there are not allowed to leave their homes and, it is claimed, are being coerced into voting.

The West and Ukraine have condemned these referenda as illegitimate and a sham. They amount simply to a land grab since they will be manipulated. This action is irresponsible and unacceptable and Putin is showing contempt for international law. Having suffered losses on the battlefield, which show Russia cannot win a conventional war, he is now seeking to declare that these regions are part of Russian territory – and under the full protection of the state – so the use of nuclear weapons to defend them would be justified.

This past week has displayed a lingering opposition within the UN itself to events in Ukraine. Many member states are now saying that the world body is not living up to its promise as a forum to resolve global disputes. It is increasingly being said that Russia’s role as a veto-wielding permanent member of the Security Council has simply made the UN irrelevant. In the words of one observer, when such a state violates so blatantly and with impunity the rules of the UN Charter and also threatens the use of nuclear weapons, that only draws attention to the weakness of the UN as an enforcement body – a conclusion that should surely worry everyone.

Mr. Young, You are one lost soul. It is difficult to even begin where you are so wrong on so many points. Let's start with the idea that a monarchy, any monarchy, should exist in 2022, outside of fairy tales. Have you looked at the overall stats on Britain's quality of life indexes? Do you realize that many people will be dying from the cold and hunger this winter? Remember how much of the world Britain controlled? How much money, loot and lives they stole from the rest of the world? And, where Britain is now? Looking good over on that side of the pond to you, Young? Reaganomics and the Thacherite TINA neo-liberal assault on humanity are only held up by those who refuse to open their eyes to see what these "policies" have done to their people. Further, economic inequality is now know to be at the root of so many social ills, health ills and the crumbling of democracies around the world. How ignorant or greedily dishonest do you have to be to ignore all these major "discoveries? No Mr. Young, you are given a voice because you represent the 1% and nothing more. Voices like yours are the very ones standing in the way of human progress. And, please don't say you are a Christian. We can put an end to that idea in very few, yet honest, words.