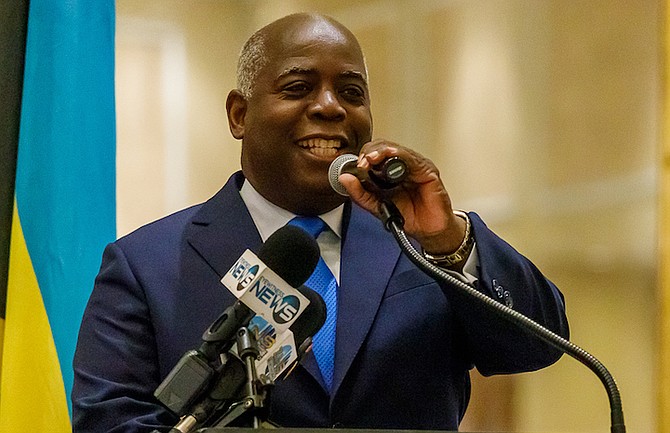 IN response to the Free National Movement’s threat of legal action against the government over its failure to follow the Public Procurement Act, Prime Minister Philip “Brave” Davis has challenged the opposition to “bring it on”.

On Wednesday, FNM Leader Michael Pintard warned that the party intended to take legal action against the government to initiate a judicial review targeting its refusal to follow the Act.

Mr Pintard added that he had already spoken with two attorneys and got a quote for a retainer for one of them in relation to this matter.

He said the party planned to take the legal route after having tried “every avenue” to get the government to reveal this information.

Yesterday, Mr Davis addressed Mr Pintard’s threat while heading to a parliamentary luncheon at the Grand Ballroom of Atlantis’ Convention Centre for the 293rd anniversary of the establishment of the Parliament of The Bahamas.

Mr Davis said that just as the FNM will do what it must, so will his administration.

“Bring it on,” Mr Davis said. “They do what they have to do. We will be correcting the flaws of that bill and then when we do so we’ll be complying with that bill and make it more workable for our circumstance.”

“They passed the Act in April of 2021 and they never brought it into force until September when they knew that they would not be in administration, because they knew it was an unworkable piece of legislation,” he said.

The Public Procurement Act was passed under the Minnis administration last year and requires the government to publish details of approved contracts and procurement activities within 60 days of the award of the contract.

Mr Pintard also said the FNM’s intended legal action will also seek to make public the settlements the government has reached with people who sued the state for various reasons.

Since assuming office last year, the Davis administration has not complied with the reporting requirements of the current Public Procurement Act, but instead called for the Act to be fully rewritten for transparency, ease of administration and the ability to be able to govern with immediate priority in instances that require it.

In May, Economic Affairs Minister Michael Halkitis told reporters the government was hoping to amend the Public Procurement Act in the 2022/23 budget period with a view of making it “user friendly” to ensure better compliance and greater transparency.

On August 10, Mr Davis added that before the legislation was brought to Parliament, officials would want to publish the proposed changes and seek public feedback.

Last month, Attorney General Ryan Pinder said the Davis administration planned to rewrite the Public Procurement Act as opposed to amending portions of it to allow for greater transparency and ease of administration.

At the time Mr Pinder told reporters the legislation in its current format had several “material issues” that restricted the government’s ability to govern effectively.

The local judges will undoubtedly make a mockery of this in their final judgement and it will have to end up at the privy council in order to get any sensible judgment either way.

Shame to see any government brazenly and wantonly breaking the law...shows we are nothing but a third world banana republic...and then the "politicians" who behave in such a childish and disrespectful way expect to be respected by their citizens and by other world leaders. What an embarrassment. Still, the vulture lawyers will be happy to tell the FNM they can win, then bill them extortionate fees to keep enriching themselves no matter the final result in court.

Seems the Long Island's MP, wasn't the only 'redshirt' was spotted out and about town doing some Stop n' Shop, legal shopping.

Good lead in my nah---yes question to our Comrade Sheepruner12. (a). Yesterday a man's said by a shopper to be of same complexion and height who is a doppelgänger to his Long Island House-seated MP, was spotted cruising the isles Stop N' Shop, presumably out and about Bay Street. doing some last minute shopping for a replacement judge following the request that "MyLady" Justice Cheryl Grant-Thompson's, eject herself from trying the defendant MP's, mural of criminal charges? ... (b) How cool, if a local graffiti artist, might be so inclined to paint a wall mural in appreciation of the patience will surely tax the backbone Comrade "MyLady of Justice, as this case winds itself through the justice system as the presumption innocence is put through the 'scrub board's' ringer, then hung out dry  before a colony's entire clothesline an 503,333 PopoulacesOfCommeners' .... Curious if anyone knows whether the much gifted local artist Homer Williams is still around?

Comrades, you just cannot make up this kinds spot tings out and about our Nassau Town ― Yes?

Now that cruel Davis has appointed Winder as Chief Justice, we have no judiciary that would ever buck the current corrupt PLP government's will on anything.

Indeed ....... The PLP controls all 3 branches of government and they are bold & brassy now.

Actually they're the ones who are in big trouble because they have created much too big a chasm between the "haves" and "have nots".

Our corruption burdened shrinking local economy is no longer able to continue growing the public sector at the expense of an over-taxed and dying private sector. And potential foreign direct investors can already smell the immense social unrest pressure built up that's going to massively erupt like the exploding top of a violent volcano.

How can a judge sit and listen to arguments on why she should recuse herself from a case because she is politically compromised ....... and laugh it off??????

The Tribune is a joke.

So they have been breaking the law under the guise of changing it? so all the crap they do for the next few years is ok? Our system is so corrupt. Don't expect to see any new bill anytime soon. They need time to continue their corrupt practices.

The PLP government is blatantly breaking the law.A law they voted for. A government cannot choose which law they will follow. Follow the law.

This is why this country is the way it is. Everybody including the government does what they want.