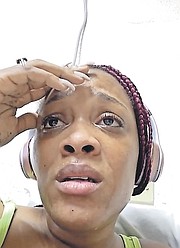 KENISE Darville as seen in a video posted to Facebook days before her death.

Dr Rolle’s comments came after reporters asked for an update on the blood banks following an investigation being launched on the death of Kenise Darville.

Darville posted a gut-wrenching video on Facebook on January 11, where she claimed doctors of Princess Margaret hospital waited several days after she was admitted before informing her that she needed to make an urgent plea to friends and family for blood donations.

The mother died on January 19, after being admitted only two weeks earlier. Dr Rolle told reporters that the investigation surrounding the circumstances of Darville’s death is continuing, adding she hoped to speak with Darville’s husband soon.

“We do know that she was a wife, a mother of three and also well loved by family members and friends.”

Jerad Darville, Darville’s husband, in a press conference on Friday called for changes to be made in the healthcare system, stressing his wife was asked on her deathbed to find blood.

Dr Rolle said yesterday that officials have heard the concerns about the availability of blood in the healthcare system, noting efforts are being made to address the issue.

“I’ve been talking with civic organisations over the weekend, on how we could deal with the issues of lack of blood within the country. And it’s not only at Princess Margaret Hospital.”

Dr Rolle said she has also heard of other countries struggling with similar issues.

She continued: “We’re looking to extend the ability for persons to donate right within their communities. So, I’m working with them this week, as well as organisations to come together. I also want the public to understand that even though you may have donors, we have various types of blood.”

Dr Rolle explained that PMH’s blood bank and the privately owned blood banks are challenged in the “amount of blood based on our population.”

She said although the banks may have different types of blood, the blood that is available may not be suited for the patients in need.

The facilities are in “critical need of blood”, Dr Rolle said. She noted she has encouraged people who are able to donate to lend a helping hand.

Dr Rolle added there are also challenges in blood donations, particularly in finding people who are in a state of being able to donate.

“We need fresh blood, right, and it’s very difficult. We have a lot of people in the population with tattoos that can’t donate. All of the variables so, what we really need to do is to educate, and that’s the information and then also engage persons to become partners so that we can always have blood in any of the healthcare facilities.”

Meanwhile, PMH has faced criticism on its quality of care since Mrs Darville’s death caused outrage.

When asked about this criticism, Dr Rolle responded that she does not want people to be deterred from the hospital and not access the care they need.

She noted that every day the hospital has a large volume of patients that come in for care.

However, Dr Rolle said officials are making efforts to improve the service at PMH.

“We’ve also partnered with an organisation to be able to help us with our boarders, we have 20 boarders in the hospital. And so, we’ve started that process of moving the boarders out. That will, you know, provide relief.”

She added: “We are seeing a full population — every day our census is up to 414 patients. And that is not those who are sitting in the emergency room in what we call virtual spaces, they don’t have assigned beds, they’re on trolleys, they’re on the emergency medical systems stretches.”

Dr Rolle said the hospital has sent 130 people to Doctors Hospital in recent weeks while PMH is undergoing renovations.

Several years ago HACE held very successful blood drives twice yearly in Governors Harbour. Mr Everette Miller of the blood bank (sadly deceased) was always enthusiastic in organising the logistics of these visits. As a regular event there was loyal support from local Bahamians, winter residents and in particular students from GHHS. In fact it was absolutely no problem to get 12th grade students to donate to the point where many continued to give when they left school and lived in Nassau. No incentive was given to these students although on occasion they would be given a $5 phone card. Normally we would send between 60 and as high as 90 pints from this two day event. Unfortunately many eligible adults despite being asked would give all sorts of excuses not to donate, but suddenly when it was a loved one in dire need they would fly to Nassau and donate. In essence given someone who wishes to take the lead and hold these events on a regular basis especially with young adults , would find no trouble in getting donations. If we could get a minimum of 15 -20 students to give from a small high school like GHHS just think what could be obtained from the public and private schools in Nassau and other family islands. It is no good making public requests and whilst that will get some donors it is much more beneficial to take these blood drives out into the community. So many give every excuse in the book not to donate but when faced with the stark reality of a loved one in dire need of blood , will donate. Donating is quick, easy, beneficial to your health and none of us never know when we will be in the same situation as the poor young lady that recently died in PMH&gt;

great points. have been involved in blood drives in Abaco which are a huge logistical nightmare. 100 pints can be found in 1 day in Abaco but getting the donations back to NP or FPO are a costly challenge on the order of private charter plane before the sun goes down as the only way to transport before it spoils. some legislative help in this regard my aid collection of donations rather than relying on the callous capital city.

All you have to do is buy the blood from the citizens. Put flyers up around the university of the Bahamas letting students know that you will pay for blood donations , and you will never run out of blood. When I was in college, my roommate used to sell his blood to the blood bank. He could only give blood in the time allocated. He got money for the blood and that is why he did it.

I swear, if they set up on UB campus in the Nursing facilities, it will not only offer visual aide/practice for medical students, it would always be packed with people of different blood types. Furthermore, the university can organize a yearly event for a blood drive, encouraging everyone to give at least once..

"Blood supply problems" seems like a straw man argument to me. While a blood transfusion may have saved the young lady's life after she descended into a critical state and is certainly an issue that needs to be addressed, she was allowed to descend into that critical state over the course of 4 months. The full story of the last days of her life as detailed by her husband is a horror story of one medical blunder after the next. Mistakes can happen anywhere our priblem is when mistakes do happen we deflect, either there was no mistake or we project onto an issue unrelated to the root of the problem

They've deflected to a problem that they can appear to be addressing by organizing hasty blood drive events, meanwhile the real issue is not being addressed

maybe time to update the rules on giving blood? western countries like the USA and UK have updated blood donation rules to increase collection rates. but in the Bahamas it takes a literal act of god to bring anything into the 21st century. For instance the online portal to Registry has been down for over a year and no one seems to care... Say what you will but slackness is the order of the day when the golden flamingo crew is in power at the top.