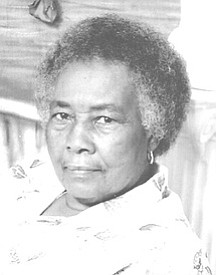 She is survived by her Sons: Vivion and Roosevelt; Daughters: Una, Corine, Joycelyn and Marcia; Adopted daughter: Betty Scavella; Numerous Grands, Great grands and other relatives and friends.