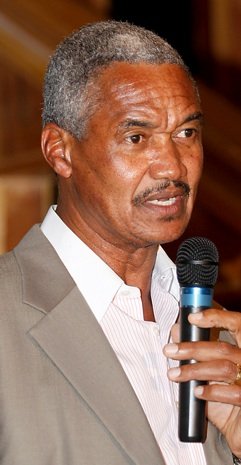 Group to protest lack of action over Miller ‘jest’

A SILENT protest is planned for Rawson Square on Wednesday in a bid to spark a response and action from Prime Minister Perry Christie on domestic violence in the country.

THE Bahamas Electricity Corporation (BEC) and the trade union representing its line staff once again appear on collision course, with the latter saying its members are opposed to contributing to their own pension plans and health insurance scheme.

THE BAHAMAS Electricity Corporation’s (BEC) executive chairman has revealed that workers hired on a contractual basis to simply carry out disconnections/ reconnections have been earnning as much as $95,000 a year.

THE cash-strapped Bahamas Electricity Corporation (BEC) is currently owed $143 million by the Bahamian private sector, its chairman said yesterday, adding that it was sinking further into financial problems.

THE Bahamas Electricity Corporation`s (BEC) excecutive chairman yesterday said it will move to a rostering and scheduling system with effect from February 1 in a bid to reduce its more than $12 million annual overtime bill.

LESLIE Miller, BEC’s Chairman, yesterday expressed concern that salaries and bonuses at the electric corporation have been putting an unnecessary burden on the backs of Bahamians.

The BAHAMAS Electricity Corporation’s (BEC) executive chairman yesterday said it was “unfair” for the cash-strapped utility monopoly to continue paying 100 per cent of all employee pensions and medical benefits, claiming that the medical plan alone had cost it $30 million over the past five years without employees paying “a single dime”.

Neighbours tell of 'pandemonium' after shooting near Miller's house

DESPITE attempts by Tall Pines MP Leslie Miller to downplay a drive by shooting outside his home, neighbours yesterday insisted that “pandemonium broke out in the area” in what they described as a “horrifying experience”.

POLICE yesterday said they were following significant leads in their effort to find those responsible for a drive-by shooting outside Tall Pines MP Leslie Miller’s home.

A TEENAGER and three men were injured in a drive-by shooting that took place outside BEC chairman Leslie Miller’s house during a party early Saturday morning, according to police.

BEC officials believe they may have uncovered an ‘oil theft ring’ that has operated on the island of Eleuthera for years.

THE Bahamas Electricity Corporation is projected to lose $16.3 million this year, according to chairman Leslie Miller –who said the corporation is on the brink of collapse and must make drastic changes immediately.

The BAHAMAS Electricity Corporation’s (BEC) executive chairman yesterday said it could save a minimum $60 million annually in fuel costs through the procurement of three new engines for the Clifton Pier power station, telling Tribune Business the benefits would ultimately be passed on to consumers.

MARIO’S Bowling and Entertainment Palace chief, Leslie Miller yesterday added his voice to calls for the Government to ban copper exports, adding that such thefts had cost him $150,000-$200,000.

'Most of New Providence has had electricty restored'

ELECTRICITY has been restored to most of Bahamas Electricity Corporation’s customers in New Providence since Hurricane Sandy, said Corporation Chairman Leslie Miller.

MARIO’S Bowling and Entertainment Palace chief, Leslie Miller, said that despite earlier setbacks he expects to have the former Robin Hood store open by Christmas, telling Tribune Business: “We have to catch Christmas season.”

THE Bahamas Electricity Corporation (BEC) is looking to slash the more than $12 million it pays annually in employee overtime by implementing a shift system, its executive chairman yesterday telling Tribune Business this currently accounted for almost one-third of payroll costs.

THE new BEC chairman Leslie Miller said yesterday he hopes to lower electricity costs for Bahamians through strategies he attempted to implement when he was Minister of Trade and Industry from 2002-2007 - namely Venezuelan oil and Liquefied Natural Gas.

Miller: 'Stupid Bahamians' quote was out of context

PLP MP for Tall Pines Leslie Miller clarified remarks attributed to him during the 2012 election campaign, in which he was portrayed as calling black Bahamians "stupid".

Robin Hood's replacement 'as big as before'

Miller admits 'stupid' quote - but says it was out of context

OIL exploration and the use of liquefied natural gas is critical to the diversification of the Bahamas' economy, according to PLP candidate Leslie Miller, who said that LNG was the energy of the future.

By NEIL HARTNELL Tribune Business Editor Robin Hood's landlord yesterday told Tribune Business he is extremely confident about finding a replacement tenant for the closing retailer, describing the Summerwinds Plaza location as "second to none" and "the b