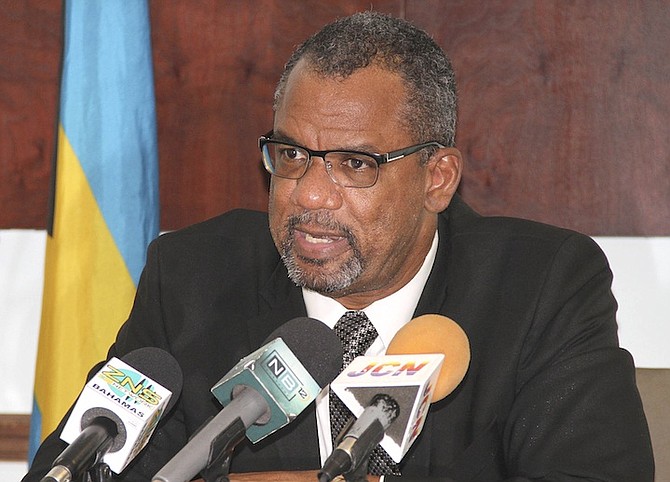 EMAILS leaked from a data breach of China Construction America’s (CCA) servers show that from as early as 2013, Jerome Fitzgerald was seeking to secure millions of dollars in brokerage, trucking, and limousine contracts at Baha Mar while he sat in Cabinet as the Minister of Education, Science and Technology, The Tribune has learned.

THE government spent around $9m to repair hurricane damage to public schools throughout the country, according to Education Minister Jerome Fitzgerald, who said yesterday that works have been “significantly completed”.

EDUCATION Minister Jerome Fitzgerald said yesterday he is surprised by the “level of unhappiness” some Bahamians have expressed at news that the government has struck a deal with the Export-Import Bank of China (CEXIM) to pay creditors and employees of Baha Mar and to restart work on the resort.

$150,000 fine for Jerome Fitzgerald in Save The Bays emails row

IN A landmark ruling yesterday, Supreme Court Justice Indra Charles declared that Education Minister Jerome Fitzgerald was not legally justified when he tabled the private emails of environmental action group Save The Bays in Parliament, and therefore could not be protected by parliamentary privilege.

Fitzgerald explains why he’s backing Christie to stay as PM

A day after identifying himself as one of the “new generational leaders” petitioning Prime Minister Perry Christie to stay on as PLP Leader ahead of the 2017 general election, Marathon MP Jerome Fitzgerald said the FNM’s recent convention inspired him to come forward.

Fitzgerald says he plans to appeal

EDUCATION Minister Jerome Fitzgerald says he plans to appeal the ruling handed down by Supreme Court judge Justice Indra Charles in the Save The Bays email hacking scandal yesterday.

Fitzgerald's failed teachings and the FNM Game of Thrones

ONCE again it pains me to have to make fun of my St Andrew’s schoolmate and former prefect, Minister of Education and Marathon MP the honourable Mr Jerome Fitzgerald.

PUBLIC consultation on the implementation of the Freedom of Information Act (FOI) draws to a close at the end of the month with the final town hall meeting in the capital being held on Monday night.

Fitzgerald ‘may be held in contempt’

HOUSE Speaker Dr Kendal Major said yesterday that Jerome Fitzgerald may be held in contempt of the House of the Assembly if it is found that the private emails he read in Parliament from members of Save the Bays were obtained illegally.

SAVE THE Bays has been granted an interlocutory injunction against Foreign Affairs and Immigration Minister Fred Mitchell, Education Minister Jerome Fitzgerald and Attorney General Allyson Maynard-Gibson, restraining them from further disclosing the group’s confidential information in Parliament.

SAVE The Bays Director Joseph Darville has said in a newly filed Supreme Court affidavit that the recent public disclosure of STB members’ personal emails by a member of Parliament is “extremely distressing” as it was an invasion of privacy that has left all involved feeling violated.