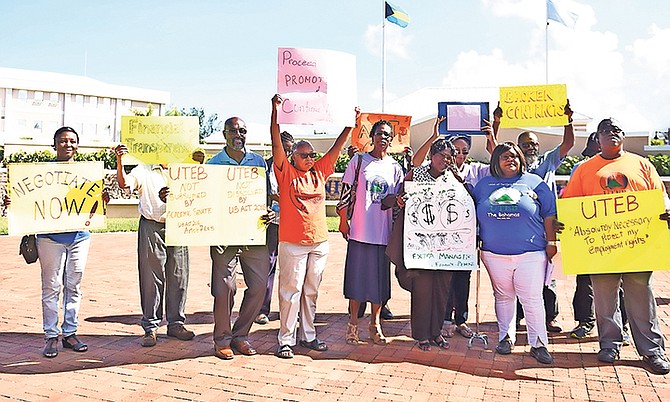 UTEB Members held a demonstration outside of The University of the Bahamas’ entrance. Photo: Shawn Hanna/Tribune Staff

University of the Bahamas ‘respects unions’ rights to free assembly’

IN the aftermath of a protest by the Union of Tertiary Educators of the Bahamas, the University of the Bahamas (UB) has released a statement reiterating unions’ right to free assembly while noting that under the UB Act of 2016, an independent board of trustees has been granted control over “matters involving the rights and responsibilities of the university’s faculty members.”

AS scores of protesters demonstrated in downtown Nassau against the Minnis administration, a smaller demonstration was occurring on the campus of the University of The Bahamas as the Union of Tertiary Educators of The Bahamas posited a litany of complaints against the institution — chief of which is UB’s failure to negotiate a new industrial agreement.