THE PRESS BOX: News from the Cowboys' ranch: Zeke's in the house

MY Dallas Cowboys head to training camp this week - the six-week countdown to the kickoff of the NFL’s 100th season is on. And despite the rumours of a potential holdout by All-Pro running back Ezekiel Elliott, all seems to be business as usual, wit

THE PRESS BOX: 'For all the naysayers, How 'bout them Cowboys?'

THE jury is still out on the Dallas Cowboys’ offence. However, it seems embattled offensive coordinator Scott Linehan got the memo. On the third play from scrimmage, WR Tayvon Austin flew past Giants QB Kelvin Martin as Cowboys QB Dak Prescott hit h

OH, how painful it is when history repeats itself negatively. 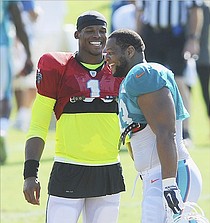 Patriots QB Tom Brady speaks to members of the media in the locker room at ...

Naughty’s predictions for the AFC: The three Bs put real steel in Pittsburgh

NAUGHTY'S NFL PICKS - WEEK 1: New season: ‘I’ve got a good angle on how to handle Mr and Mrs Dorsett’

OKAY I know it’s the moment you’ve all been waiting on...... “Naughtydamus” is in the building.

QUALITY Beach Soccer experienced success at all levels in the Bahamas Beach Soccer Super League. The squad was victorious in both the league and cup competitions, despite only having one World Cup team member in their squad. They took the final with

THE PRESS BOX: Popcorn for ‘one interesting offseason’ in NFL

A five-yard run in the first quarter gave the 41-year-old Patriots QB Tom Brady 1,000 yards rushing on his career and he became the oldest player to achieve the milestone since 1970.

Naughty’s predictions for the NFC: If not my Cowboys then the Panthers will pounce

Dak to the future in Big D.

ALL offseason long, and now on the eve of training camp, the biggest question in Dallas remains what to expect from the team’s wide receivers, in the post Dez Bryant era. As NFL training camps are set to open this week, former Cowboys QB, and now th

THE PRESS BOX: Man down! 5 QBs to replace the injured ‘studs’ in Fantasy

I KNOW some of you fantasy football owners are still crying this morning. And, if you are, it’s because you probably had Aaron Rodgers on your team.

OKAY, last week was bad for me (6-8) but others were worse! Including Sannie, previously ‘untouchable’, who went an unusually ‘unlucky’ 5-9.

EVEN though I’m not a huge fan of ‘moral victories,’ especially in sports, I have come to accept the fact that they are a huge part of the sporting landscape.

THE PRESS BOX: Cowboy Nation – News from the ranch as we head into Week 2

AFTER an outstanding debut to the NFL season, with a 35-17 shellacking over the New York Giants, the Cowboys look to hit the road this week and improve to 2-0 on the season, and in the NFC East division, with a road win against the division rival Washington Redskins. As we head into Week 2 of the NFL season, here’s the latest news from around the ranch:

NAUGHTY'S NFL PICKS: Dolfans, your ‘Cinderella’ run is done against this Steelers squad

I TOLD you I had the picks title on ice!

A TWO-team race between the Packers and Lions with Minnesota a potential ‘dark horse’ that could surprise some people and teams on any given Sunday, especially if they are playing away.