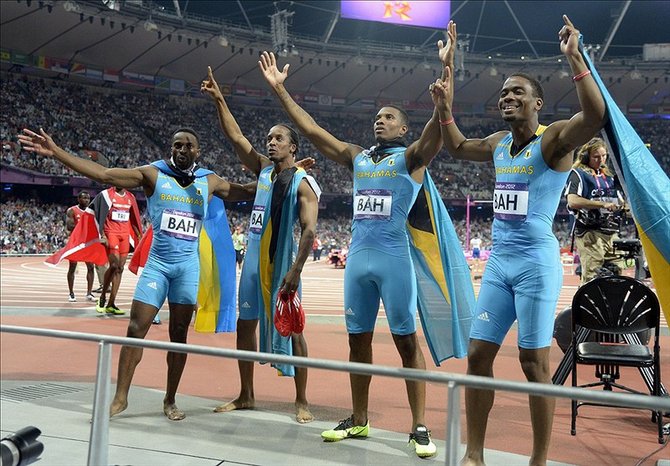 LONDON, England: A change in the line-up between Chris ‘Fireman’ Brown and Ramon ‘Fearless’ Miller resulted in the Men’s 4 x 400m team snapping the United States of America’s 60-year stranglehold of the Olympic Games title and capping off a traumatic experience here on Friday night with the only medal - GOLD - in the final event for the 26-member Bahamas team.

The relay team of Brown, Demetrius Pinder, Michael Mathieu and Miller ran a blistering time of two minutes and 56.72 seconds for a new national record, erasing the previous mark of 2:57.32 set back in 2005 at the IAAF World Championships. It was also the fastest time for the year, lowering the previous best of 2:58.87 that both the Bahamas and the United States ran in a photo finish in the heats.

But more importantly, after playing second fiddle for so long, the Bahamas finally did what no other country has done in 60 years and that is to beat the United States on the track, a feat that comprised of 11 straight victories in the 1600 metre relay. The men took the monkey off the Bahamas’ back and celebrated as if they had won the Olympic Games, albeit the Bahamas is now tied for 45th place with Algeria, Grenada and Venezuela.

In what was a deliberate strategy to throw off, but ended up stunning their opponents and eventually had the 80,000 fans in the packed Olympic Stadium cheering from start to finish, men’s head coach David Charlton and the rest of the coaching staff decided to change the line-up of Miller, Pinder, Mathieu and Brown and it worked to perfection.

“The guys went out and got it done,” said Charlton, who admitted that they got consultation from a number of persons, including Bahamas Association of Athletic Associations’ president Mike Sands.

Brown, normally the man who has anchored the team for the past 16 years, said it wasn’t about him, but what was good for the team and the country.

“I gave it all to the Lord. I didn’t lose faith and I didn’t lose confidence. I didn’t let the 400 metres get to me,” said Brown, who fell shy of his ultimate goal, which was to win his first individual medal in the 400 metres, only to fall short in fourth place for the second consecutive Olympiad. “I knew that the country was depending on us to bring home something.

“I trusted in my team-mates and they trusted in me. I knew that whatever happened in this race was going to be the determining factor with what we go home with.

“I told the guys, once I do my leg, it’s up to you all to do the rest, whether you want to go home with gold, silver or bronze. But I will get us out front and you do the rest.”

With a split of 44.9, Brown did his job as he passed the baton to Pinder, who took a slight lead on the back stretch and maintained it as he came in again, like he did in the heats, with the fastest split of 43.5. Once he passed it to Mathieu, he had another tough battle with American Tony McQuay, but this time, Mathieu was able to hold him at bay with his split of 44.25. McQuay powered through in the American’s fastest split of 43.41.

Then on the anchor leg, Miller shocked the world as he got a slight lead, only to get caught and passed by American 400 hurdler Angelo Taylor on anchor. Miller, however, stayed on Taylor’s trail until he came off the final curve when he scooted past him in a split of 44.1 for the upset. Taylor could only muster a 44.85 as he faded dropping the United States in second in their SB’s of 2:57.05 for the silver.

Trinidad & Tobago claimed the bronze in a national record of 2:59.40.

Pinder, in giving thanks to God and dedicating his performance to his dead sister, Claudia, who passed away and was buried while he was here, said that was his motivation.

For his part, Mathieu said he seemed to have been put into the lion’s den against McQuay, but he didn’t want to let the team or the Bahamas down.

“I was just trying to stay as close to him as possible,” Mathieu said.

“That’s what I did. He’s good. He’s really, really good. But I was just trying to hold him off. I guess it was good. He was rolling yesterday and he came back and was rolling again today.”

While Mathieu said he was impressed with the way Brown and Pinder got the team rolling, he was in awe of what Miller did.

“It was amazing. We finally won gold after chasing the United States for years and years,” he said. “All that hard work finally paid off. We finally got them.”

Considered to be the ‘David against Goliath,’ Miller found himself in a tough situation where the Bahamas either went for it all, or came up short again. With the pressure squarely on his shoulders, Miller rose to the occasion and got the job done as he made believers out of the non-believers.

“Coming home, Angelo was in the front, but I learnt patience. I waited for the right move and the right time to kick,” he said. “When I passed him, I knew he wasn’t going to catch me. When I passed him at the 80 or 60 metres, ain’t no way he was going to come back on me.”

The only thing left is for the team to pick up their medal. They will get that tonight at 6:45 p.m. when the medal presentation is held just prior to the start of the final day of competition in athletics, thanks to a switch by the organisers to highlight the Men’s 4 x 100m relay over the 4 x 400m.

Their victory turned out to be a sweet one for the Bahamas, which earlier in the day was awarded the bid to host the first two IAAF World Relay Championships in 2014 and 2015, Leevan ‘Superman’ Sands underwent surgery on his knee and IAAF Councilwomen Pauline Davis-Thompson presented the flowers to the winners of the Women’s 4 x 100m Relay team, including the Americans, who set a world record in running away from Jamaica.

so proudddd this should be a sign to our nation individuals could not get one medal but together we got GOLD ....we gatta work together and I LOVE the way the guy went in the camera n say 242 all day thats that pure unadulterated bahamian pride

no doubt they would be winners

Well done gentlemen. You are great role models for our youth.

All I can say is WOW! I am weak from celebrating. Hats off to the "Goldrunners"

Proud to be a Bahamian! Congrats guys.

Congrats to the Bahamas team on their 4 x 400m relay win, I am absolutely delighted to see The country that gave me the happiest years of my life win gold :)

Their team effort for gold will make the entire 26 member Bahamas team feel like they have all won a gold medal!!! In fact, the whole Bahamas feels like we won a gold medal.

What a fantastic feat and accomplishment

Congratulations gentlemen we finally did it. It shows that hard work and perseverance pays off; after coming in second so many times before to the US you continued to push forward. I am also glad that David Charlton finally took counsel and put his ego aside for once to run the A team in the semis to guarantee us getting in to the finals this time (unlike last year at World Championships where we finished 9th) and reshuffling the line-up to take advantage of each runner’s strength.

as a nation we need to push our government to at least gave each of our guys a million dollars and i hope our former prime minster take note millions and millions he decide spend on roads i pray our prime minster now do the right thing when it comes to our guys millon each primemister do our country proud mr.primemister i know you will

A great job no doubt but I am not one for turning medal winners into instant millionaires. Countries with greater resources than Bahamaland are nowhere approaching a million dollars for Gold. Paying Cash Rewards to Olympic Medallists - Fact board While a $20,000 prize for Canadian gold medallists is nothing to scoff at, some countries are more appreciative of their champions than others. The most lucrative cash prize for a gold medal is offered by Italy. Despite the country's debt problems, Italy pays gold medal winners about 183-thousand dollars. With 7 gold medals so far, the Italian government is on the hook for almost 1.3 million dollars. The United States gives 25-thousand to gold medal winners, 15-thousand for silver, 10-thousand for bronze. Russia rewards gold medallists with 135-thousand dollars. China paid roughly $55,000 apiece for the 51 gold medals earned in the 2008 Beijing Olympics -- although the Chinese Olympic Committee denies this number. South Africa just announced a prize of nearly 55-thousand for gold medal winners. Ghana pays medal winners the same amount as Canada, 20-thousand dollars for gold. Great Britain is the only team atop the medal standings that does not offer cash incentives ... and it currently sits fourth in the medal standings, third if you go by the number of Gold.

Comrade paul63h for a cool million dollars each for wining gold what say you if we remove children at age 5 like the Chinese state does, to be taken from from their parents and brutalized into future Olympians hopefuls?

Just you remember Bahamaland's money all comes from collecting taxes, so be careful how you put your free spending hands to be dishing out my share of tax contributions to the 4 gold medal winners.

Sorry, I am not aware of the Brits paying/footing their athletes for any monies - during training or even after their medal wins?

Do we really want this or any other Bahamaland government to adapt to what the Chinese and other gold medal hungry government does to their nation's little children, for up to 15 hours every day?

Just you go visit the work camps in countries that the Chinese government is funding projects?