VISION OF THE FUTURE 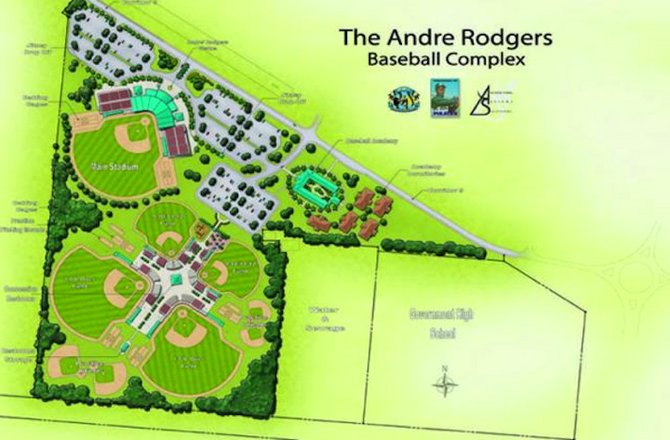 NOT since the Ministry of Youth, Sports and Culture demolished the Andre Rodgers Baseball Stadium in 2006 to make way for the construction of the new Thomas A. Robinson Track and Field Stadium has senior baseball been played in New Providence.

The plan, designed by architect and former baseball player turned coach Teran Rodgers, calls for a main stadium with a seating capacity of 5,000. There would also be a pair of 13-and-over fields and combined smaller fields for ages 9-10 and 11-12 that will accommodate 1,500 seats each.

There will also be at least four practice fields built in the proposal for the complex, which will be next to the Government High School in the Queen Elizabeth Sports Centre.

Additionally, there will be a baseball academy and five dormitories.

Construction of the complex, according to Maynard, will begin in stages sometime this year, although he declined to give any further details until all of the specifics are ironed out by the Sports Authority that will come into existence in the next two weeks.

"In 2006, in preparation for the ground breaking of the new national stadium, the Andre Rodgers Baseball stadium was demolished, and so from 2006 to date, we have not had a national facility for baseball and senior baseball has suffered as a result," Maynard disclosed.

"In fact, night-time baseball in the Bahamas has suffered as a result. So, with the introduction of these facilities, we hope to take advantage of all of the success that we have had over the years in junior baseball and bring senior baseball back to the Bahamas in a big way."

Kemp, accompanied by his secretary general Teddy Sweeting, it's great that under his watch, the complex will start to take shape, but it doesn't matter because he just want to see that the young players in the country have the best opportunity to play in the best facilities available.

"I'm honored to be the one sitting in the chair here for the moment," Kemp stressed. "I'm just more elated that it's going to take place soon."

While the focus is now being placed on the new complex, Kemp said the federation is looking forward to the day when at least one stadium is constructed on each of the islands where they

"The plans that we have for baseball is going to blow everybody away," he said. "But this is our starting point. We would like to see Major League teams come here and have spring training and have exhibition games.

"We would like to host collegiate games. We have all sorts of things that we would like to see happen for this complex. That is why we believe that it is important for us to design a first class facility to attract these kinds of events to our shores."

Kemp said it is obvious that everyone wants to come to the Bahamas, but a lot of times, there's only one shot in making it possible and so the federation wants to make sure that they take advantage of their opportunity.

Maynard congratulated the federation for their diligence in keeping the sport alive, despite not having a national stadium to showcase the senior players.

"What they would have done was brought baseball back alive in the Bahamas. Baseball used to be one of the number one sports back in the day in the 1960 and 1970," he said.

"We had a lull there for a long time baseball just was not progressing. The sports federation decided to concentrate on youth development and doing that we ended up with successes in baseball."