'Fight Over Dog Led To Murder' 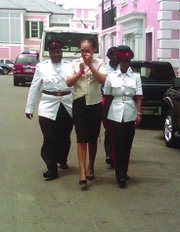 Jessie Williams is led to court.

A 12-YEAR-OLD boy told a jury a fight over a pitbull being hit led to a woman murdering her husband in a parking lot.

Before the fifth-grader could testify under oath yesterday, Justice Vera Watkins questioned the pre-teen to ensure he understood his role in court concerning murder-accused Jessie Williams.

Williams, 45, of Nassau Village is charged with murder, facing and allegation that on July 31, 2010, she murdered her 45-year-old husband, Sylvanus Williams.

The court heard yesterday that he arrived at about 9pm on Saturday for his work shift as a security guard at the US-based firm American Bridge.

It is claimed a woman approached him and stabbed him a number of times. He died at the scene. His wife, an American citizen, is alleged to be the culprit. She denies the murder charge.

Yesterday, prosecutors Neil Brathwaite and Uel Johnson called their key witness to testify, a 12-year-old boy from Nassau. After confirming he knew the difference between the truth and a lie, the boy began his testimony.

He told the court that he was at home with a relative when a man he referred to as "Mannie" and his wife, Jessie, pulled up at their home to see the relative. He said not long afterwards he left with the couple, whom he knew.

He sat between the couple on their way to "Fish Fry" while the pitbull was in the back seat. "Mannie" was going to turn on the car's lights, then feed the dog but it attacked him and so he allegedly beat the animal.

"He [Sylvanus] was driving off and Jessica said, 'Why you beat the dog?'" the court heard. "Jessica keep pointing her finger at him. 'Mannie' drive by Green Parrot and parked the car.

"He [Sylvanus] start choking her. He was choking her very hard and she started stabbing him," said the boy.

Mr Brathwaite asked the boy how this had happened.

He said: "Jessica gone to the other side. She went around the car and stabbed him."

At this point, the accused was shaking her head.

Mr Brathwaite asked the boy if the defendant did anything else. He said: "After that, Jessica started calling the ambulance."

In cross-examination, defending attorney Godfrey Pinder asked: "Did you smell any liquor on 'Mannie'?"

Mr Pinder said: "How was he driving? Was it nice or a little different?"

The boy said it was "a little different" and said that "Mannie" was speeding.

The boy told the court the man driving turned on the jeep light and started hitting the pitbull then Jessica Williams started rowing with him about it before Mr Williams pulled over and started choking her. He said the choking lasted about a minute during which Jessica Williams was saying "let go of me".

Mr Pinder asked the witness if he was afraid. "Yes, sir," he said.

Mr Pinder suggested to the boy that he never saw Jessica Williams pulling out a knife. He told the court he did see.

Also testifying yesterday was Princess Margaret Hospital pathologist Dr Caryn Sands, who told the court that the victim died of a single "six and a half inch" deep stab wound to the left of his chest.

Under cross-examination, Mr Pinder said to the physician that she could not conclude that Mr Williams' death was because of the stab wound because she did not examine his health prior to the stabbing. She disagreed.