Faces Return To House Of Assembly 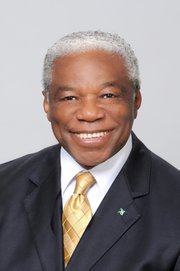 THE PLP won a massive victory yesterday, and many of the faces that defined the first Christie administration are returning to the House of Assembly.

Obediah Wilchcombe was re-elected in West End and Bimini and Melanie Griffin retained her seat in Yamacraw, as did Philip Davis in Cat Island, Rum Cay and San Salvador.

Other PLP incumbents that were re-elected include Ryan Pinder in Elizabeth, Alfred Gray in MICAL, Glenys Hanna-Martin in Englerston, Shane Gibson in Golden Gates, and Fred Mitchell in Fox Hill.

Dr Anthony Moss is still the representative for Exumas and Ragged Island.

The FNM won the majority of the seats in the Family Islands with Edison Key re-elected in the Central and South Abaco, Neko Grant in the Central Grand Bahama, Loretta Butler-Turner in Long Island and Peter Turnquest in East Grand Bahama.

The FNM won both seats in Eleuthera - Howard Johnson in Central and South Eleuthera and Theo Neilly in North Eleuthera.

All that is left to decide is what the inscription will read on the FNM's tombstone as a political force ever again in our soon to be returned back to the natives Bahamaland. Maybe the party can secure a free plot up at that failed and now rejected Tommy's family owned graveyard.

Congratulations to Prime Minister Christie and all who were successful in the election. The contest is over, now let's all come together to make this a better Bahamaland.

Return of the Goon Squad part 2

HERE COME THE NEW OIL BARONS ,AND THE POOR WILL GET ABSOLUTLY NOTHING IF THERE IS OIL HERE ,,,WHO NEEDS KOREAN FISHING BOATS ,,WHY STEAL THE FISH WHEN WE CAN RUIN THE ENVIRORMENT AND STEAL THE PEOPLES OIL!!!!!!!!!!!!!!!!

Hey Bahamas we are not red, yellow, gold we are Bahamians. So let stop the beckering and get our country moving. Let us rid our country of overwhleming crime, unemployement, and victimization. Yes Hubert did great and all the best to him but let us get behind the new prime minister and get ou country going,

change the flag to red yellow and green...Rasta Party 2017