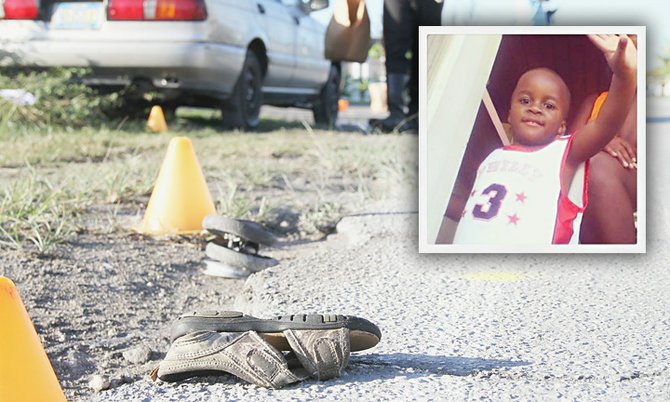 “HOW can we be so heartless?” was the question the Tall Pines MP put to Bahamians yesterday when offering a $2,000 cash reward for any information leading to the arrest and prosecution of the driver responsible for last week’s hit-and-run accident.

Speaking to The Tribune on what led him to put up the reward on behalf of his constituents, Mr Miller said the driver’s refusal to come forward and accept responsibility for the death of 3-year-old Jordace Rashawn Kemp and injuries of his mother, Shavandi Russell, is “terrible”.

“This is really terrible that no one has come forward as yet,” he exclaimed, adding “I’m putting out a $2,000 cash reward for some information leading to the arrest and prosecution of this person.

“This is a disgrace in our country today,” he continued. “I mean for people to know what happened, to kill that child and leave the mother in bad shape?” he said.

Last Wednesday, around 6:50am, Shavandi Russell was walking on St Vincent Road, pushing her 3-year-old son in a stroller, when they were hit by a passing vehicle.

“The mother was pushing her male child in a stroller travelling east on the southern side of St Vincent Road when a vehicle travelling west collided into them,” said Assistant Superintendent Craig Stubbs, officer in charge of the Traffic Division said.

“The impact of the hit caused the child, in the stroller, to be dragged 200 plus feet from the initial point of impact. The child, was unfortunately, pronounced dead on the scene. The mother had significant head injuries and is in critical condition in the Princess Margaret Hospital. The driver failed to stop.”

The mother’s condition has since improved, but is still serious. However, police continue to appeal to the public for help in finding the driver. They are also asking the driver to turn himself or herself in.

Yesterday, Mr Miller said the incident led him to do some reflecting and “I asked myself today ‘how can we be so heartless as a people?’”

“How could they sleep at night after seeing that child’s blood on the car and knowing they did what they did. Even their family members too who know what happened and have yet to come forward.”

“I am putting up this reward on behalf of the good people of Tall Pines. I don’t think we as a people should let this go,” he said, adding that the people of the Bahamas should do the right thing.

“This is a cash reward and I hope this could help and invite others to do the same if they can,” he said.

if I knew that lowdown nogood sucker I would have turned him in for free.