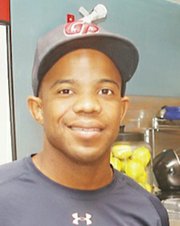 ANTOAN Richardson has moved one step closer to playing in the Major League of Baseball again, this time in the farm system of one of the most popular franchises in all of sports.

The New York Yankees signed Richardson to a minor league contract this week, with an invite to spring training.

Richardson spent last season in the Minnesota Twins organisation, but did not get the elusive “call up” to the majors, despite his productivity.

The 30-year-old outfielder, who played in nine games for the Atlanta Braves in 2011, was a member of the Twins’ Triple-A International League Rochester Red Wings and their Double-A Eastern League’s New Britain Rock Cats last season.

In his nine-year minor league career, Richardson has established a reputation as a player with a high on-base percentage. He has 318 steals in minors, 39 last season.

Originally drafted by the Baltimore Orioles in the 27th round of the 2001 amateur draft, Richardson stayed at American Heritage School in Delray Beach, Florida, until he was drafted for the third time, this time by the San Francisco Giants in the 35th round in 2005.

He went on to play in the pipelines with both the Giants and the Atlanta Braves until the Braves called him up to the MBL, where he made his debut on September 4, 2011.

Speaking with the Tribune following the end of his latest minor league season, Richardson discussed the trials of a career in the minors.

“It comes to consistency. I know I still have a good opportunity to get to the majors. It’s just a matter of me staying prepared and being ready at any moment to receive that call. Going through the minor league system, it’s not an easy task and it takes a lot of will and perseverance,” he said.

“Having received the call before, a lot of the younger guys definitely look up to me and seek my advice on certain things and I just try to let them know, the number one thing is to stay focused and keep everything in perspective,” he said.

“I always remember a quote Ryan Howard said to me and it keeps me inspired, he said to ‘treat every play, every inning, every game, every season like a major league season.’ It helps because no matter where you play you have to stay at your best while you look for that opportunity.”