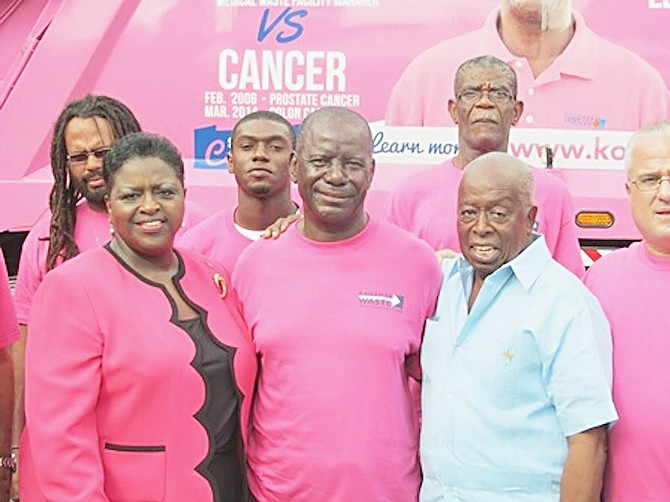 TAKING its breast cancer awareness initiative beyond just a month or a single event, the Bahamas Waste company continues to promote its efforts with the help of its now famous Big Pink Truck.

Since the official unveiling in October, the bright pink coloured Bahamas Waste truck has caught the attention of both locals and tourists in Nassau.

Now, the Bahamas Waste team decided to put a photograph of cancer survivor Hartley Strachan, the company’s manager of medical waste, on their repainted pink truck to drive home the message of continued cancer awareness.

Mr Hartley, 62, is a two-time cancer survivor. He was diagnosed with prostate cancer in 2006 and after a three-year battle was declared cancer free. However, during routine check-ups earlier this year he was informed he had colon cancer. He is currently undergoing chemotherapy and is on the road to remission.

“He has battled cancer twice and even though we did it during Breast Cancer Month, which is when the awareness is heightened, we figured it would be a bonus to have a man promote early detection. He agreed to be our poster child, so to speak,” said Disa Campbell, CFO at Bahamas Waste.

Ms Campbell said over the years they have took part in various campaigns that included their trucks.

“Our initial programme with the painting and designs all related to environmental preservation and all things Bahamian. We had turtles, a seascape at one point, and a flamingo. Normally when we bring in trucks we paint them Bahamas Waste colours and put them to work, but we are looking for artists for the rest of them. The second one we will probably do some time early next year. The Breast Cancer truck is going to stay pink for as long as it can and as long as the paint job allows” said Ms Campbell.

Bahamas Waste in October also launched its “Big Pink Pics Giveaway”, a 10-week promotion inviting the public to take selfies in front of the pink truck as it drives around town. After the picture is taken and posted on the organisation’s Facebook page, a person is eligible to win a variety of prizes.

“Once we did the unveiling, we were trying to figure out ways to continue getting the message across, promoting cancer awareness and early detection. As a part of this desire, our operations manager just blurted out, ‘Let’s just ask people to take selfies and send them in’. Our PR people just ran from there. With the campaign we invited a lot of our customers and vendors to take this new ride with us. We got an amazing response from quite a few of them,” said Ms Campbell.

Five winners have been chosen so far; they were all awarded with gifts and surprises from sponsors Ride For Hope, Susan G Komen Race For The Cure, Bahamas Ferries, John Bull, Starbucks, Sun Oil Limited, Micronet, Coca-Cola, and Fourth Terrace Diagnostic Centre.

Big Pink Truck photos are still being uploaded to the page on a daily basis with persons posting in hopes of becoming the sixth winner.

Ms Campbell said the company currently has 64 trucks operating and she is happy that they have this great opportunity to get the word out in regards to various issues in the country.

But just how did the painting of the trucks idea get started?

Ms Campbell said they had a relationship with a waste company in South Florida and would often use them as a sounding board to compare their market to what was happening in the Bahamas.

“It was just an exchange of information kind of thing,” she said. After a trip to Florida, she said they saw the particular waste company’s trucks beautifully painted and very well maintained, so they also decided to run with that idea.

“Cancer is a really serious illness that is affecting our country right now and early detection can really save people from really serious illnesses down the road. Bahamas Waste is a publicly traded company, 100 per cent Bahamian owned and we have 1,200 share holders. For us that comes with a lot of responsibility, not only in creating value for our shareholders and giving them a reasonable return on their investment, but also uplifting our community and being a good corporate citizen. We find tons of ways to do this on an annual basis and year-round absolutely free collection,” said Ms Campbell.

For more information about the initiative and the Big Pink Pics Giveaway, visit the Bahamas Waste company profile page on Facebook.