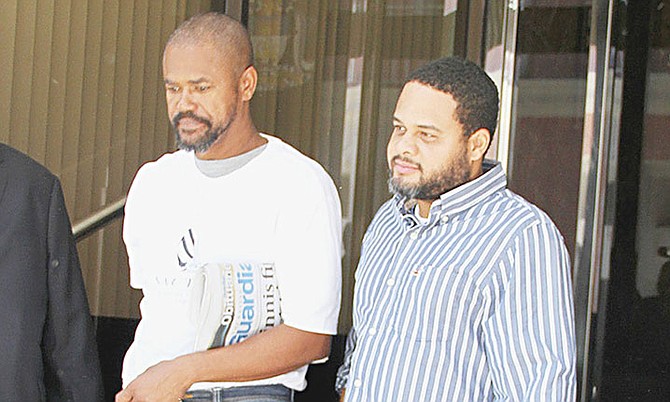 TWO pilots sought bail – pending appeal – from a Magistrate yesterday moments after he convicted and sentenced them to prison in connection with a $1m drug seizure.

Darryl Bartlett and Murrilo Sullivan’s lawyer, Murrio Ducille, made the application to Magistrate Andrew Forbes after the court  informed the pair of their right to appeal the conviction and respective sentences relating to the 12 crimes they were found guilty of committing on April 7, 2014.

A magistrate has the legal discretion to grant bail to a convict if he/she has given the court notice of their appeal against conviction and/or sentence.

Mr Ducille did so after the magistrate had completed his 90-minute ruling. Crown prosecutor Garvin Gaskin objected to the application, saying the bond should only be issued in exceptional circumstances.

Mr Ducille countered that the exceptional circumstances was the evidence of the case itself which, he said, showed that his clients were used by a US Drugs Enforcement Administration (DEA) agent when they had no involvement with the drugs.

Officers and administrators of the Drug Enforcement Unit acted on a tip that led them to the Executive Flight Support section at the Lynden Pindling International Airport. A search was conducted of a Hawker Jet that had just arrived from Montreal. During the search, officers found four suitcases containing 113 packages of marijuana, ecstasy pills and hashish oil.

At trial, DEA agent Eric Durante testified that both accused men were in contact with him before the flight left Canada en route to Treasure Cay, Abaco.

Agent Durante said he instructed the men to bring the bags to Nassau after they contacted him during the flight, questioning why there was “heat” at the airport in Abaco.

The pilots and Webster, however, were arrested on their arrival at Executive Flight Support in New Providence.

Webster reportedly told Inspector Weymond Demeritte, in the presence of Bartlett and Sullivan, that his girlfriend’s father asked him to deliver the bags and two cell phones to an unnamed person in Treasure Cay.

At the trial, the two said they knew Durante and had been in communication with him from time to time, but denied being DEA informants.

They further denied knowledge and possession of $1m worth of drugs found on the plane, in which they brought a passenger from Canada to Nassau.

However, Magistrates Forbes said he found the evidence of Durante to be credible and that the prosecution had proved its case beyond a reasonable doubt.

They had respectively served three and ten months on remand awaiting the outcome of the trial, which the magistrate took into account when imposing his sentence.

waste of talent,could have been better used just working for your money.

The agent INSTRUCTED the men to come to Nassau? HUH?