Crime: What On Earth Is It? 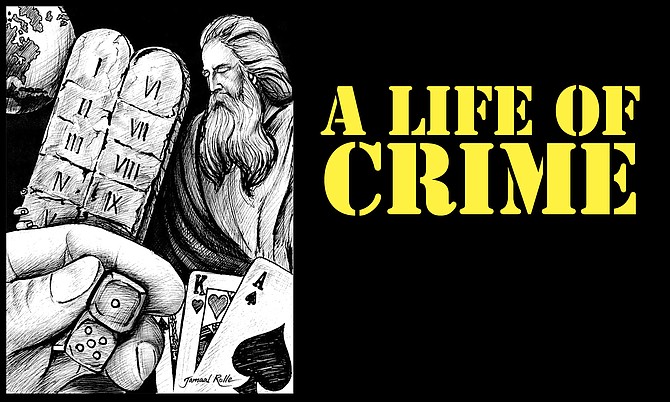 The reasons behind the increasing catalogue of murders, shootings, armed robberies and sexual assaults are many and varied, from gangs and drugs to youth unemployment and poverty. Is incarceration the answer? What can be done? In 2015, an evidence-based discussion is required, one with emotion removed.

Dr Mike Neville is a forensic psychiatrist who has spent 40 years - the majority in the Bahamas - working in the hospitals, courts and prisons at close quarters with offenders. His experience and expertise qualifies him to examine the causes, effects and potential remedies of crime, from the cradle to the grave, and drawing on how other countries have tackled the issue.

And we want you to be involved and help inform the debate. Week-by-week during the coming months Dr Neville is analysing the reasons behind crime and challenging the perceptions of how it can be dealt with. Every Tuesday, through his articles in The Tribune and in a live phone-in starting today on the new Kiss FM96.1 at 3pm on 677-0961 he will welcome views - unconventional, challenging and supportive - from everyone. Join the discussions via comments on tribune242.com or email to lifeofcrime@tribunemedia.net.

The cure for crime lies with society as well as the government, police and other agencies. It is time for new year resolve and resolution.

The struggles to remember the dates of long past wars, or was it the dates of the crowning of new leaders, or in some cases the same great leaders’ execution date. The history books made it seem fairly simple, winners and losers like the weekly sports results.

The language, however, has gradually changed. Faced with overwhelming force, freedom fighters developed guerrilla tactics - or were they really terrorists? The psychologists did their bit with “friendly fire” (killed by your own side) and “collateral damage” (innocent civilians dead as well). In fact, an eminent American psychologist William James suggested that there were positive aspects to war for a community, such as a sense of unity when faced by a collective threat which can create a sense of cohesion with communal goals. This then encourages self sacrifice and courage.

This must have been the hope when declaring a war on crime, but in The Bahamas there had already been a war on drugs and I am not at all sure that either war has been successful or completed.

What has gone wrong?

It is perhaps instructive to look at modern warfare, where it has become increasingly difficult to know who the enemy is. A terrorist cell can live in a community for years before being activated. Who are they, where are they? It is much the same with crime: it is sometimes difficult to know what is a crime and who on earth are the criminals.

There is a long history of religious laws and state laws; some are similar but many are different from religion to religion and country to country. Is it a crime because it is written down that it is against God’s law or is it only a crime if it offends the law of the country?

Breaking God’s law will hopefully remain on your conscience until you face your maker; assuming of course that is what you believe. Even this is complicated by religious difference, not only between major religions but even within the same religion, where zealots and subsets come up with totally different interpretations and some truly horrific consequences.

Then there are many who believe a crime is decided by the state and can be defined as something that attracts a legal punishment, which assumes that you will be caught, prosecuted and convicted.

There are laws in many countries that have simply not been repealed and remain as a source of amusement.

In the United Kingdom, members of parliament are not allowed to wear suits of amour in Parliament (1313) and it is an offence to operate a cow whilst intoxicated (1872). In Missouri it is illegal to drive with an uncaged bear in the car; it is also strictly forbidden to wake a sleeping bear for a photo in Alaska. I would be delighted if any one can find some Bahamian laws that can bring us similar amusement.

There are, however, many very serious matters of which I am unsure as to the criminality of the offence.

Is gambling a crime?

Well, not for tourists in casinos, but yes for Bahamians. Web shops were recently illegal but now some are fine, I think! How often have there been prosecutions for gambling and, if no one is prosecuted, was or is it really a crime?

Is drug use a crime?

Well, not if the drugs are prescribed. But certain drugs are illegal and every year many people are arrested for possession of these drugs and many go to Fox Hill Prison for this crime. There is also a wide belief by organisations like the World Health Organisation that drug addiction is an illness, so why are we sending sufferers to prison and not into treatment programmes? There are always more individuals in prison with drug and alcohol problems than in the mental hospital next door.

Perhaps we should be honest and say that, as a society, we believe that it is really not an illness but a moral problem?

Alcohol certainly creates confusion. It is a legal drug which has certain restrictions to its sale but which seem generally to be ignored. It is linked to many cancers and also to crime: however, being intoxicated is no excuse. If you voluntarily took the intoxicant then there is no defence; but if it made you psychotic - ah, that’s different. In some countries, it is an offence punishable by flogging to drink alcohol. America experimented with prohibition and probably helped the Bahamian economy.

Crimes like murder or rape would seem easier to classify.

They are against God’s law and the country’s law and bring a sense of outrage - at least when they are committed and reported there is anger and demands for punishment.

However, if we look at conviction rates, it would seem that the outrage vanishes under concepts of reasonable doubt. In cases of rape, there seems to be a clear bias against women, which is greatly helped by who you are and who is your defence counsel.

If I appear confused writing this, hopefully you are too. The idea I am trying to examine is that for the “war concept” to work there has to be a very clear idea of who is on which side. I would like to think that I am on the side of law and order, but when my car is stopped and I am told to “get out” with an automatic weapon pointed at me by a man in camouflage clothes I feel very much on some sort of other side.

There is no question that the police have a very difficult job, but it is essential that they are perceived as part of the community, not apart from the community. The efforts of community policing and Urban Renewal are a step in this direction but there remains a large element of distrust that needs to be overcome.

It is not helped when even the Ten Commandments seem to have been amended:

Thou shalt not kill, unless you are the state executioner.

Thou shalt not commit adultery, unless your neighbour’s wife is gorgeous. I mean, surely sweethearting is not a crime but it certainly leads to countless crimes of passion.

A brilliant Jamaican psychiatrist explained to me that Caribbean men do not sweetheart, they practice “a fluid form of serial monogamy”.

Thou shalt not steal ... I don’t think I should go there!

There really is a desperate need to clarify all aspects of crime, understanding the multitude of correlations to crime here in The Bahamas, and we need to look at ways to prevent the predisposing factors that lie within our ability to change. We need to explore some sort of societal agreement as to what behaviours are acceptable and what are not.

Where do we want to go next?

How long can we escape Nassau being regarded as a war zone with a disastrous loss of visitors?

I certainly do not have all the answers but with your input maybe we can establish what we would like to fight and what behaviours can be left alone.

I welcome all your contributions and invite your interaction and comment, via email to lifeofcrime@tribunemedia.net, on 242tribune.com and by phoning our live radio broadcast on the new Kiss FM96.1 at 3pm today on 677-0961.

Become a part of the way out of this disaster called crime.

NEXT WEEK: Dr Mike examines if we could be predisposed to crime before we are born.

Excerpt from Nick Cohen in The Independent ~ UK newspaper

To show that connections between criminality and joblessness have existed for decades, David Dickinson, an economist for Public Policy Research looked at who actually commits crimes. A 1972 study of 18-year-olds in London showed that the offending rate was three times higher for the unemployed. Research by the Northumbrian police between 1975 and 1980 showed that about one-third of all offenders were unemployed men. In 1993, the National Association of Probation Officers surveyed 1,331 convicted offenders and found that 79 per cent were living on means- tested benefits.

Moving from the small to the large scale, he then looked at young men, the group most likely to be involved in crime and showed that their rate of offending was closely correlated to rises and falls in the unemployment rate. The fit could be tightly measured: every time the jobless figures went up by 1 per cent, there was a 0.4 per cent rise in burglaries.

This is not a particularly radical idea. A report from within the Home Office itself, which was leaked last April, concluded that all the evidence from Britain and abroad showed that the "single most effective form of intervention was the provision of employment to offenders".