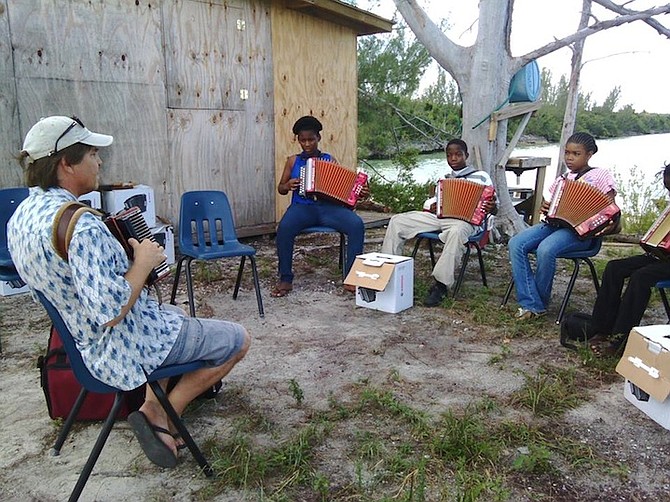 The Cat Island Accordion and French Project summer camp takes place all week long on Cat Island. The camp is taught in French and features master accordionist Robert Santiago, who is a specialist of South American traditional rhythms and European rhythms.

According to Ms Hamilton, preserving the accordion tradition is extremely important because it is an endangered instrument in the Bahamian culture. It is also the instrument that gives rake n’ scrape its distinct flavour.

“It also allows the local community to connect with all other traditional societies that use the accordion, with France being one of them,” she told Tribune Woman.

The accordion has a long history, especially on Cat Island. Ms Hamilton said up until now the instrument has never been taught formally.

“The children that became accordionists were predestined to be so because as they saw or heard the accordion, their desire to play was so strong that they started to observe and listen. And once they could pick something up, they would have to be very sly and sneak the instrument, for the simple reason that it is very fragile, expensive and is not for children. Once they got the accordion, they tried to reproduce what they heard and saw. This went in for 400 years,” she said.

As people in the Cat Island community began migrating to the capital and elsewhere in search of work, they took with them their skills and the tradition was no longer being passed down to the next generations.

“The community balls where people would come together and celebrate also did not happen anymore. There are only three traditional accordionists left on Cat Island to my knowledge,” Ms Hamilton said.

One of those is Frank Williams, whom Ms Hamilton met when she returned to Cat Island in 2009 to record traditional music for a French radio. While there, Mr Williams had expressed his distress at the loss of the accordion tradition and the fact that no one was doing anything to preserve it.

“His instrument wasn’t working and no one was concerned about passing it on or creating the conditions for that to happen. I made a promise then and I told him that I would help him. I came home in 2012 after living in France for 30 years to help my mother at my brother’s request. I immediately launched the camp because in the meantime I was promoting Bahamian traditional music in France,” she said.

“We started the camp in Cat Island and I asked the music teacher on the island to recommend musically inclined youths, boys and girls that would be able to fit into the programme. Children who have passed through the programme have exhibited tremendous potential.

“The potential is there for the students to become extraordinary accordion players. And because the island has a history of rake n’ scrape they know that it is in their genes. Those that stay part of the programme, practice and continue to excel. By the end of the programme they will be at world level. For the other children in the programme who may not go on to become excellent accordionists we will have revived in them the history of the accordion and rake n’ scrape. They will know how to play a couple of tunes on the instrument and they will know the importance of the instrument in their culture.”

Ms Hamilton is a singer and a part-time French lecturer at the College of the Bahamas. She has taught languages for over 30 years and also seeks to test a theory concerning the learning of a foreign language when associated with an activity during the summer camp.

None of the students in the camp have been exposed to the French language before.

“I am also testing a theory that you can learn a foreign language if you associate it with an activity that is also demanding, like learning to play an instrument. So instead of focusing on the language we are focusing on learning the instrument because it puts the learner in the context of anyone learning a language where they are all ears. They cannot translate. They can only count on what they see,” she said. “How do I measure what they kids are doing? Well, they can play.”

While the camp is free, Ms Hamilton said they need the assistance of the community in purchasing desperately needed accordions.

“I am sending out a very urgent call. We need at least 10 new accordions so that the children can learn and practice,” she said.